Sometimes my 3-year-old is the most kind-hearted and loving little boy in the world. He uses his manners, he gives surprise kisses and hugs, he wants to cuddle and share his Goldfish. He thanks me for the pudding cups, he gladly puts away his toys, he says, "Sure, Mama" when I ask him to help me fold the laundry.

I'm listening to him have a meltdown about his bath water. He said the water is too hot. It's not too hot. It's actually perfect. He's just saying it's hot because he doesn't want to take a bath.

Three seconds have passed since he said the water was too hot. He's decided that it is not too hot, but rather, it is too cold. It isn't. He still just doesn't want to take a bath.

There goes the shriek. The splashing of bath water. I hear the sound of my husband's irritated voice through clenched teeth. Now it is silent. I'm not sure if the boy is actually in the bathtub or if my husband gave up and put him to bed with grass stains on his knees.

My son is a difficult toddler. The terrible two phase hasn't disappeared since he turned three. He's strong-willed. And sometimes, quite frankly, he's an ass. I've read all of the parenting books about strong-willed children, but none of them offer any good advice.

My boy has every Thomas and Friends train ever invented -- except for Percy. He begged for Percy for 12 days, at least 15 times an hour, so I broke down and took him to get the coveted Percy locomotive.

When we got to the store, the boy decided that he didn't want Percy anymore. He wanted Salty. I asked him if he was absolutely sure of this critical decision. He nodded with certainty, so I purchased Salty. Salty was cheaper than Percy, anyway.

We got home and my son changed his mind. He demanded that I return to the store for Percy. I tried to reason with him. I asked why he didn't get Percy when he had the chance. He didn't want to talk it out or listen to reason. He just wanted Percy. It's been three days and he still wants Percy. After an epic meltdown on both of our parts, I took Salty away from him. Now he has no Salty. And no Percy. He's seriously pissed at the situation.

Where's the parenting book that tells step-by-step what to do when difficult toddler decides that his green beans are disgusting, but the Cracker Barrel waitress refuses to swap them out for corn on the cob? It doesn't matter that he was hyped about green beans three minutes earlier. All that matters is that right now, in this moment, green beans are putrid and he does not want them setting anywhere on our table. He'll scream at the top of his lungs until this waitress takes away the green beans and replaces them with corn on the cob that he will find equally as disgusting in twelve seconds time.

All ideas in the history of ideas are horrible ideas if they aren't his ideas.

For example, I think it would be a great idea to go to his room and read books. He usually loves reading books, but because I told him we should read books, he revolts. "There will be no book reading here tonight, lady! I'll burn this place to the ground if I must!"

He actually likes to nap. He'll tell me he needs to rest, and I nearly urinate on myself from excitement as he disappears into his room and cuddles with his Pillow Pet. However, if I tell him that its time to nap, he goes stark-raving nuts. "There will be no slumbering here today, lady! I'll shriek like Mariah Carey for three hours if I must!"

He won't wear the monogrammed outfit for the Christmas picture. He's not about to wear corduroy overalls with a red-nosed deer applique. Those threads are totally not cool. "There will be no picture taking here today, lady! I'll strip naked if I must!"

He wants to watch Toy Story 3. I mistakenly put Toy Story 2 in the DVD player. I must be some kind of idiot. As he loudly points out my mistake, I eject the disc and put in Toy Story 3. Excuse me, dear Sir. I didn't know you'd changed your mind and wanted to watch the tragic tale of a Clown Fish that was suddenly ripped away from his widowed father.

You're reading this and you're thinking I should A.) spank him 2.) ignore him 3.) put him in time-out G.) reason with him.

I've tried all. None work. None. NONE.

He doesn't always get his way, but I've learned to pick my battles. I don't spoil him, I don't give into his every whim and desire, I don't let him play in the street or swim without floaties just because he says he's a "big boy." But, I pick my battles.

If you have a difficult toddler, then it is best to pick your battles, too.

Let him take the "white and khaki" themed family photo in a redneck Lightning McQueen shirt. Show it to his future girlfriends and dramatically, with hand motions and colorful adjectives, tell them how obsessed he once was with Cars and how he said "ka-chow" and thrusted his pelvis while dancing naked on the trampoline.

Let her eat all of the Halloween candy in one sitting. When she's puking Kit-Kats, ask her if she wants another one.

Let him throw an un-interrupted tantrum once in a while. As he screams and convulses on the floor at grocery store, nudge the shocked woman standing beside you and whisper, "What in the world is wrong with that little psycho?"

Pick your battles with difficult children.

Whichever works best for you.

**Ah, here he comes, fresh out of the bathtub with teary eyes and clean hair. It looks like daddy won that battle. Water wasn't too hot or cold, was it, you difficult little hotshot?** 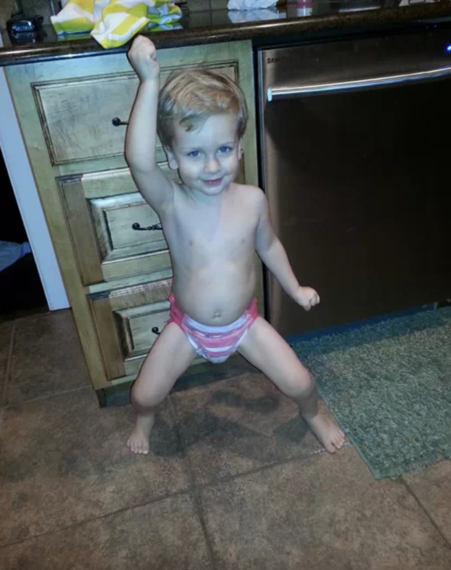 More:
ParentsParenting parents-momsparents-toddlers
Newsletter Sign Up
Raise the kind of person you'd like to know
Subscribe to our parenting newsletter.
Successfully Subscribed!
Realness delivered to your inbox