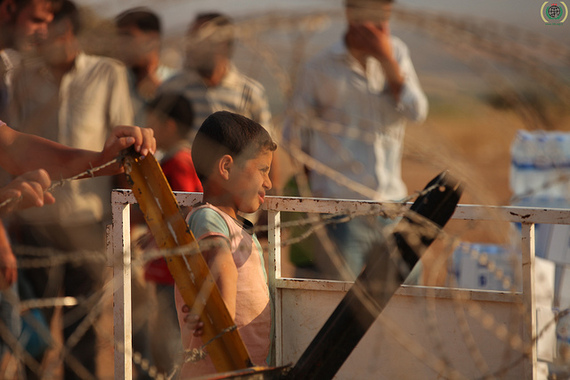 Over three million Syrians, inside their own country but many close to its borders, are in urgent need of food and medical aid. Just on the other side of those borders in countries like Turkey, sit the UN's emergency supplies for Syria. In some cases the distance between the people and the aid is just minutes away. But it sits undelivered because five UN agencies will not cross Syria's borders without consent from the Assad regime -- consent that is continually denied. This week, the UN's most important humanitarian agencies are confronted with an historic opportunity to truly realize the reason for their existence.

On February 22nd, the UN Security Council passed a unanimous resolution that requires the regime in Syria to allow "rapid, safe and unhindered humanitarian access" for UN agencies, including aid across its borders. The regime has not complied and continues to use starvation as a weapon of war. Every 30 days since the passing of that resolution the UN's head of humanitarian affairs Valerie Amos must report on its implementation. The second report will be delivered today. It will confirm that the regime has largely ignored the resolution by arbitrarily denying UN agencies permission to provide cross border aid to opposition held territory. A number of governments (including the UK), legal scholars and human rights organizations have concluded that this constitutes a breach of International Humanitarian Law. As such, the UN has the legal right to cross the border without consent from the regime. Now is not the time to wait for unanimous legal opinion, because unanimity will never come. Now is the time to start the trucks and drive that aid to the millions who need it. But instead, we wait.

There is no doubt that these agencies are hesitating because there are serious calculations to be made. They must be debating how the regime might react to cross border aid without consent. No one is naïve enough to think that they are in an easy or simple position. But no calculation they currently have to make can result in a sum greater than the lives of those three million people. These lives must not be sacrificed to political expediency.

The Syria Campaign has launched a petition targeting the heads of the five agencies: Anthony Lake (UNICEF), Ertharin Cousin (WFP) and Antonio Guterres (UNHCR), Valerie Amos (OCHA) and Margaret Chan (WHO). It gives us all the chance to tell these five leaders that they have our backing to send the trucks in, to deliver food and medicine and to be on the right side of history.

The price of not acting will be to fail yet another people who are heroically hanging on by a thread for their very survival. It will add to more frustration and disillusionment with the UN and its ability not only to act, but to act effectively. Simply put it will further damage the standing of the UN for many around the world who still hope for its success. But, if they seize this moment and deliver what is vitally needed for our brothers and sisters in Syria at the their time of greatest need -- they will remind us all of their reason for being.