'It is not possible to say that all of those who have joined the attempt belong to that community...' 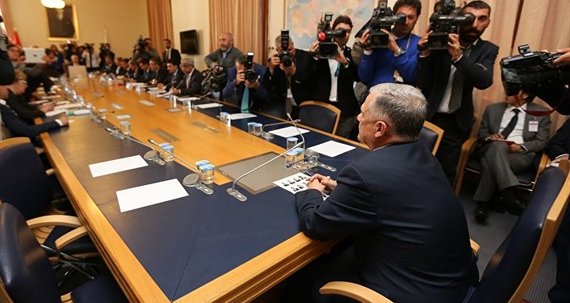 This statement comes as a response by Ümit Dündar to the question of a parliamentary deputy in Turkish capital last week, as part of the work to investigate the coup attempt that traumatised Turkey in July 15.

Dündar is a four-star general who as the commander of the 1st Army of the Turkish Armed Forces - located in Istanbul-, emerged as one of the key figures behind its failure.

With the 'community' he was referring the 'Gülenists', a description of those who are followers of Fethullah Gülen, a reclusive cleric living in exile in Pennsylvania, USA.

Dündar was summoned, among some others, to testify before the cross-party parliamentary commission in Ankara last week, and his statements did not fully disperse the question marks swirling around the hours that shattered Turkey, pushing it further into havoc from July 16 on. 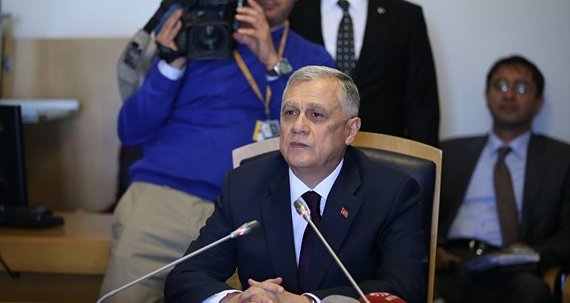 If what happened hours before and during the coup attempt is a puzzle, as many cool-headed analysts agree, it remains a puzzle, which refuses itself be solved.

''What happened that night, it looks to me, like the murder which was committed in Agatha Christie's book, The Orient Express, and my party, the CHP, acts like Hercule Poirot. You know, at the end of the novel, everybody had somehow taken part in that murder. July 15 is the Orient Express of Turkey''' said Aykut Erdoğdu, who is a main-opposition member of the four-party commission.

''Some underdogs may prove to be putschists, and some putchists may emerge as underdogs.''

In an inteview with the leftist daily, Birgün, Erdoğdu points out, that 'reasonable' questions like 'Was there a negotiation that night?' and 'Was the coup known to be coming?' were still kept unanswered.

He complains that the commission may very well end up failing in its pursuit of the truth:

''We could not not accomplish anything. It is as if a secret hand obstructs our work. This secret hand may in the coming days cover up some things while pushing forward a fictive scenario as the reality. We should be prepared for the effects of a counter-coup.'' 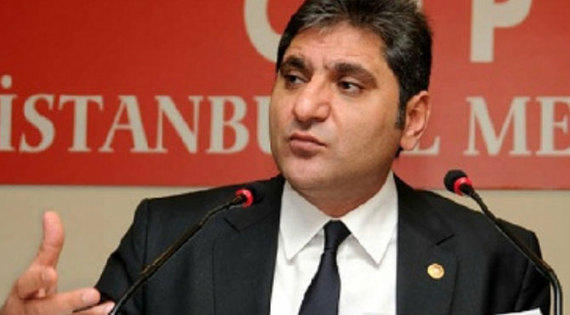 He may be right. Three months have passed and the bloody coup attempt, with its deaths and destruction that shattered Turkey, is still wrapped in mystery.

What happened during the night of July 15th until the middle of the following day?

We know enough about the citizen resist­ance to the putschist troops blocking bridges and roads, F-16 jets flying at extremely low altitude with seemingly endless sonic booms over Istanbul and Ankara, the troops shooting at the crowds and, later, the lynching of many soldiers.

As of the evening of the day after, the overall picture of Turkey would be best described as a ruin.

And many major questions remain:

Who masterminded the coup?

Who pushed the 'button'?

If successful, who would be sitting on the military junta?

Was it a 'pure' Gulenist coup attempt or does it point out to a larger picture, of broader engagement of the top army ranks? What does its flawed orchestration tell us about the reasons for total failure?

The now up to 90% pro-government Turkish media obstinately, without any scrutiny, focus on the role of Gulenist officers, who have been depicted as the sole culprits and demonised as FETO (Fethullah Terror Organisation).

Any attempt to display scepticism and dig into the underlying reasons and actors behind the coup is taboo. Journalists are discouraged from doing so and those who ask rational questions do so with the risk of being branded.

"You doubt, therefore you must be part of FETO plot," is a common accusation in Turkey, where fear and paranoia rule.

But, nothing will make the bold questions go away.

'They can not clarify what happened that night' he says.

He then offers his analysis:

'There are dark holes during the day and night of the coup. It is said that an officer went to MIT (Turkish Secret Service) Headquarters already 11 a.m. that day. Thereafter, first the Deputy Director of MIT goes to the Chief of Staff Headquarters , soon to be followed by the director himself. The Director leaves the Chief of Staff around 9 p.m. and 'disappears': neither the President nor the Prime Minister could reach him. It was said that he had gone to visit the Director of Religious Affairs. At those hours we had started to hear the calls for prayers from the mosques all across the country.

The president says that he had heard about the coup from his brother-in-law. Soon after Hakan Fidan (the Director of MIT) leaves the army headquarters, a putchist Special Forces unit invades the place. Statements about the night are contradictory. Was the Top General, Hulusi Akar, arrested there and then, or was he taken to the Akıncı Air Base (epicenter of putchists)? There were many officers who vouched for General Akın Öztürk (arrested for belonging the group which masterminding the coup, yb). Was he really a putschist, or somebody appointed to negotiate to block it? There are severe inconcistencies between the statements, 'confessions' of the putschists and what has been told to the public.'' 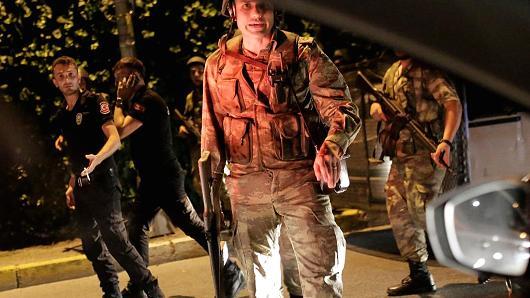 When looked carefully into the complicated, messy orchestration of the events of July 15th, what emerges is a series of mysterious acts by AKP figures and top army officials in the hours preceding the coup attempt.

According to fragmentary official statements and confirmed data, the secret service of Turkey, MIT, had already been informed about "activity" inside the army headquarters and barracks at about 3pm or 4pm on July 15th. It is also known, by official statements, that the head of MIT, Hakan Fidan, entered the army headquarters in Ankara and was reported to have informed Erdogan at those hours about the mutiny apparently brewing.

From that point on, the sequence of events is wrapped in mystery.

Akar was reported captured about 9-10pm as the putsch unfolded. So were the commanders of the branches of the military, the narrative goes.

One of them was General Abidin Unal, commander of the air force, who was the guest of honour at a wedding in Istanbul together with the country's number two general. Both men were taken prisoner as the wedding hall was assaulted by masked officers, causing general havoc.

A key figure in ensuring the coup failed was the 1st Army, based in Istanbul, Ümit Dündar, had appeared at an early stage of the coup attempt on TV and distanced himself from it in clear terms.

He was later promoted to deputy chief of the General Staff.

If MIT had informed the top generals, then how on earth did they end up being arrested about six hours later?

How come the civilian government was caught by a big surprise late on Friday?

What happened in those critical six hours, between afternoon and midnight?

And what happened before the top commanders re-emerged free the next day? 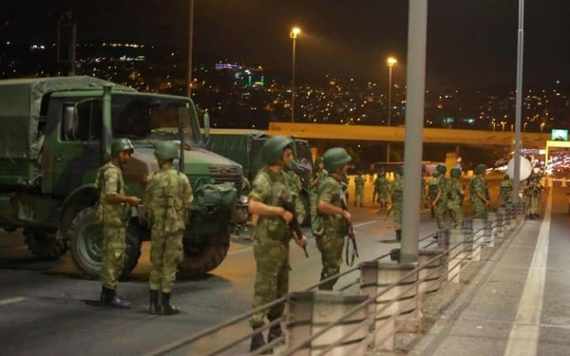 In the aftermath of the attempt, another major element is puz­zling analysts:

160 generals are held in detention, dismissed from their duties. This number roughly corresponds to 40% of the top echelon of the Turkish military.

That all of them, as accusations indicate, had belonged to the Gülenists awaits to be addressed properly, seriously with concrete evidence.

Bits and pieces put together do not, as concluded by sharp-minded colleague Umit Kivanç, appear convincing that it was a coup undertaken purely by the Gulenist flank of the army.

"For their own, different motives, many flanks at the top echelons seemed to be involved," he wrote in a blog for P24 website, adding that the pattern that day shows series of deceit, divisions, changed minds, panic, "suicidal acts", such as bombing the parliament building and, the day after, modifying the narrative on the sequence of events to save themselves.

Another colleague, Ahmet Şık, who had suffered a lengthy detention that he blames in the Gulen movement, offered his analysis - which I agree with fully based on my research - that the putschists acted on a much broader, looser base.

In a recent panel discussion at Weatherhead Center at Harvard, he argued that between the time the plot was uncovered and the time the rebellious officers began to move on Istanbul and Ankara, there were negotiations between the Turkish intelligence services, the civilian government and nationalist officers who were part of the coup alliance:

The coup failed not because it was poorly planned or because civilians took to the streets to oppose it but, rather, because the Turkish government successfully broke the alliance between the non-Gulenist officers and those affiliated with the movement.

One of the crucial pieces of evidence, or lack thereof, is the fact that no organisational chart or plan for a military junta has surfaced since the coup was foiled. Such a chart has been a crucial part of every other coup plot in Turkish history.

According to Sik, this is evidence the Turkish government is trying to cover up the extent of the coup and the specific officers involved.

The apparent unwillingness of President Erdoğan and his tightly controlled AKP to inform the domestic an international public about what lies beneath the coup attempt with concrete evidence - beyond the empty rhetoric - combined with the claims from the opposition about a cover up, and the recent reports (by Amnesty and HRW) of massive use of torture, keeps a dense shadow over this major incident which, as a consequence or pretext, now transforms Turkey into an oppressive Central Asian republic. 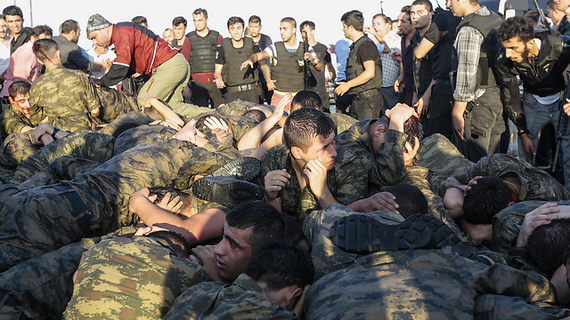