It has become increasingly evident over the last two years that the growth engine of the Brazilian economy has run out of steam. Despite relative resilience during the global financial crisis and following a quick recovery, economic growth registered just 1 percent in 2012 and a meager 2.5 percent in 2013. More recently, the economy grew at the annual equivalent of only 0.6 percent in the first quarter of 2014. Little improvement is expected in the near term. To the contrary, as of early June, the median forecaster expects growth of 1.4 for 2014 and 1.8 percent for 2015. Further out the horizon, a muted recovery is anticipated that would bring growth to 2.5-3 percent between 2016 and 2018.

Brazil's recent slow growth performance is disappointing in at least two respects. While not atypical for an advanced economy that has exhausted the benefits of catch-up growth, the slow growth observed in Brazil would be neither typical nor desirable for an emerging market in need of further per-capita income growth and shared prosperity. Recent growth rates also disappoint relative to recent economic history as the 2004-2008 period saw growth in the region of 5 percent; instead, they evoke the memory of the 1981-2003 period when the economy grew on average 2 percent annually.

The Figure illustrates well the degree of current-day growth pessimism. Market forecasts about Brazilian economic growth two years out have dropped considerably. They have done so not only relative to the zenith of 4.5 percent reached in 2010-11 but also relative to estimates earlier in the last decade of 3.5 percent. While this deterioration reflects structural developments that are a cause for concern, we believe that the perceived decline in the growth capacity of the economy reflects excessive pessimism -- not unlike the earlier period of exuberance when expectations were equally distorted, though then on the upside. 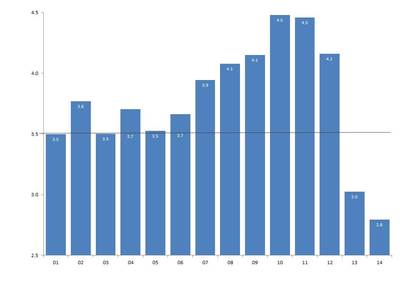 What explains growth pessimism in Brazil?

The answers may be found in what underpinned the growth acceleration of the mid-to-late 2000s. The growth spurt back then resulted from the delayed effects of the reform efforts in the 1990s and the first half of the 2000s, when Brazil got its macroeconomic house in order and implemented reforms in the financial, trade and social sectors (Ter-Minassian, 2012; Canuto et al, 2013). Risk premiums on all Brazilian types of assets fell systematically after it became clear that the commitment with fiscal discipline, inflation targeting and flexible exchange rates would be preserved regardless of the political parties in government. In addition, favorable external conditions prior to the global financial crisis relaxed financial constraints and financed growth.

These same three factors once responsible for Brazil's growth acceleration -- the credibility of the macroeconomic policy framework, the support of the external environment and the reform efforts on the microeconomic front -- have underpinned three strands of growth pessimism that have become prevalent in recent economic commentary on the future direction of Brazil.

The first strand of growth pessimism espouses the view that recent macroeconomic management has eroded the hard-won credibility of the macroeconomic policy framework built on fiscal prudence, exchange rate flexibility and inflation targeting. In response to slow growth coupled with high inflation, policymakers have relaxed fiscal policies, accommodated sticky inflation at the upper end of the target range, and introduced large currency market interventions to dampen exchange rate volatility. Critics point to these developments - alongside interventions to control inflation with administered prices and to support growth through less than fully transparent para-fiscal operations -- as the beginning of a slide down a growth-reducing slippery slope (Wheatly, 2014). They also consider the recent downgrade of Brazilian sovereign paper to one notch above junk as validating their concerns.

These factors do not justify in our view the modest growth forecasts observed in recent months. While the return to macro instability of the sort seen in Brazil's pre-stabilization period can be discounted as a remote possibility, the policy framework did suffer a credibility loss as the authorities struggled to respond to the evolving macroeconomic environment of slow growth and high inflation. But these interventions took place at a time when the flexibility implied by such actions would be considered as warranted in order to counter economic conditions and stabilize asset prices. Brazil also continues to enjoy large external buffers and the pillars of the macroeconomic framework have remained broadly intact. While care will need to be given to ensuring that fiscal buffers are restored and inflation returns to the mid-point of the target range, we do not consider that any credibility losses incurred so far have been an overarching factor in stalling growth or depressing expectations.

The second strand of growth pessimism laments the lack of a supportive external environment. This view is intricately related to the hypothesis that the growth acceleration before the global financial crisis was to a large extent thanks to external rather than domestic factors. Rapid capital inflows, better terms of trade, and lower global interest rates all played to Brazil's favor when times were good. By analogy, as conditions changed for the worse, so did Brazil's economic fortunes. Looking ahead, this view paints a depressing outlook for Brazil to the extent that its premier trading partner, China, continues to slow, major advanced economies remain stuck in the doldrums, and global capital becomes more expensive and less readily available as the Fed tapers off its purchases of long-term securities. All of the above are thought to present a clear and present danger for Brazil (BNP Paribas, 2013).

While external factors continue to play a role in Brazil - both by affecting the real and financial side of the economy - they are all too often overplayed. Growth in Brazil is still largely made in Brazil given the overwhelming share of its domestic market in GDP. Brazil's external trade accounts also remain well diversified in terms of products, export destinations and import sources (Canuto et al, 2013). The role of the external environment in raising growth during 2004 and 2008 must also not be overstated as an important component of the growth acceleration back then was due to the delayed effects of earlier macro- and micro-economic enhancing reforms that produced stabilization gains and enhanced productivity (Canuto, 2013).

This then brings us to the third strand of growth pessimism, which relates to the lack of progress in improving the microeconomic fundamentals for growth. This strand is in our view of far greater concern than the credibility cost of recent macroeconomic management or the economic impact of the deterioration in the external environment. Indeed, the microeconomic environment is critical for growth even more so today than before. This is because demographic dynamics have reduced the growth of Brazil's labor force. Higher growth will therefore require first and foremost higher output per worker or productivity. But productivity growth remains constrained by slow capital accumulation (both human and physical) as well as a cumbersome business environment. For Brazil to energize and sustain productivity growth, it will need to enable the enabling environment and disable the disabling environment.

Yet, during the recent period of slower growth, little progress has been made in tackling long-standing structural bottlenecks and therefore the structural reform agenda remains long and unfinished (Canuto, 2014). Unsurprisingly, slow growth has of late become primarily a supply-side phenomenon of a structural nature. This is indicated by the fact that, despite slower growth, the output gap is as good as closed, inflationary pressures are pronounced and the labor market is buoyant with unemployment at record lows.

The key challenge going forward will be to energize the momentum of progress. In this respect, the recent ratings downgrade is not to be un-welcomed. It is not a wake-up call in the sense that Brazil is about to slide down the slippery slope of macroeconomic mismanagement or on the verge of an externally powered economic meltdown; rather it should be seen as a call for action on the structural reform front. For the main risk facing Brazil and its economy is the specter of mediocre growth over a protracted period of time against a counterfactual potential of opportunity. Such scenario would not only exacerbate any current concerns about macroeconomic vulnerability but also - and more importantly - imply that Brazil would be ineffective in seizing its development potential.