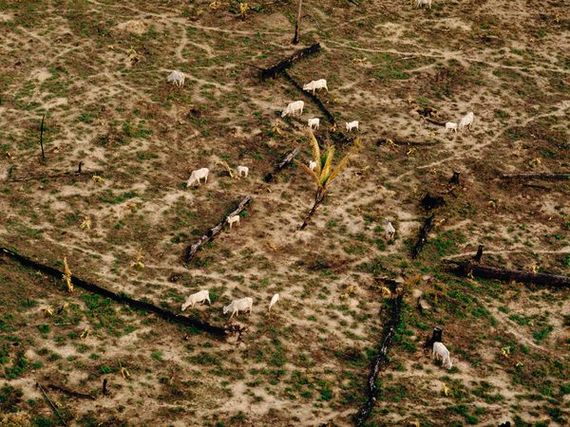 Cattle graze on what is left of what was once a rainforest in Brazil. Cattle ranching is the leading cause of deforestation in the Brazilian Amazon. Image courtesy of
National Geographic
.

Let's begin with a mental picture. The activity called "The Earth as an Apple," so straightforward that young and old alike can grasp it, is a graphic representation of the looming problem of animal agriculture. Only about 3 percent of the Earth's entire surface is capable of producing food for an exponentially growing human population (predicted to reach 9 billion by 2050). Given that it takes 16 to 20 times the amount of natural resources required to feed a meat and dairy eater as to feed a vegan, that alone should be reason enough to switch to a plant-based diet.

But there's more... far more. Factory farming also accounts for 37 percent of methane emissions. Considering methane has over 20 times the global warming potential of CO2, that's a scary number to consider. Meat production emits more greenhouse gases than the entire transportation sector, and producing just a half a pound of hamburger emits as much CO2 as driving a 3,000-pound car 10 miles. Astounding. One study looked at what would happen if urban and suburban households in four countries -- the United States, United Kingdom, Spain and Brazil -- swapped lentils for beef once a week and found that the emissions reductions from this step would equal taking 3.7 million cars off the road for a year. While driving a Prius might help you feel good, it doesn't come close to the benefits of ditching meat and dairy.

If you care about our precious planet, consider that hundreds of millions of acres of forests and rainforests worldwide, including 260 million in the U.S., have been cleared for livestock grazing or for corn and soybeans, the primary animal food crops. In fact, the equivalent of seven football fields of land is bulldozed every minute to create room for farm animals being grown to feed humans. At this rate, the world's rain forests could disappear in a hundred years, which will drive climate change and cause habitat loss for millions of species.

In terms of life-giving water, growing animals to feed humans is calamitous. Strong word, I know. But consider, first, that doing so is a leading source of water pollution in the United States. Why? We grow 150 billion animals annually to feed a human population of 7 billion. Try to wrap your head around that number. Where do we put all the poop? Factory farms put much of it into the ground, into manure lagoons that leach into our groundwater, killing entire waterways and countless animals. Or sometimes they just pump it directly into the water in direct persistent criminal violation of The Clean Water Act.

Whether shit ends up in our water accidentally or intentionally, what matters is this: it's choking oxygen from our streams, ponds, and oceans -- resulting in "dead zones" that kill aquatic life and sicken humans. This past summer, for instance, nitrates in Iowa's Raccoon River reached 240 percent of allowable levels, and parents were warned not to let children drink from the tap.

Pollution isn't factory farming's only impact. Water use is a tremendous concern as well. Cornell University researchers estimate that "producing a pound of animal protein requires, on average, about 100 times more water than producing a pound of vegetable protein." One sobering example of the problem is that one of the largest aquifers in the world (and one that provides drinking water to 2 million Americans) is predicted to dry up within the next 50 years due to overuse by the beef industry.

Al Gore, perhaps America's best-known environmentalist, recently went vegan, and suggests he will continue this lifestyle for the rest of his life. Unfortunately, too few players have gotten the memo. Leaders such as Bill McKibben of 350.org and earth-friendly non-profits like Greenpeace have yet to come out in support of plant-based eating.

What's the hold up? Animal agriculture is ruining our precious Earth, the only home we have. Time is not on our side. Want to do your part this Earth Day, eco-warriors? Go vegan. Anything less is lip-service.