We talk a good game about opportunity in this country, but here are three signs that we're failing to provide young people with a fair shot at prosperity.

Sign #1: People typically achieve most of their earnings gain in the first 10 years of employment.

A new study from the Federal Reserve Bank of New York shows that "the bulk of earnings growth happens during the first decade" of a person's employment. (The study actually focused on men, for methodological reasons.)

The authors reviewed nearly 40 years of data from the Social Security Administration, and found that the the typical employee makes the largest income gains between the ages of 25 and 25: 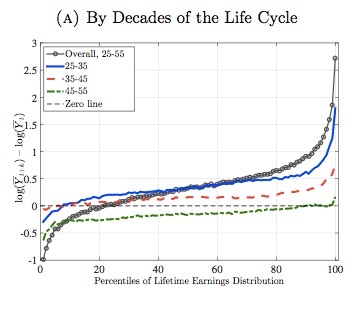 For most people, these years represent the greatest opportunity to reach a good lifetime income. The average income increase for median earners falls to zero between the ages of 35 and 55. For all but the top 10 percent of earners, income actually declines ("negative growth") between the ages of 45 and 55.

That means the first years of employment are critical. These are the years that will determine a person's lifetime earnings.

The unemployment rate for workers between the ages of 18 and 34 peaked at more than 13 percent in 2010, and that figure doesn't include underemployment or discouraged workers. Younger people continue to feel the sting of unemployment at a higher rate than that of the overall population.

As a recent White House report on Millennials observed:

Younger workers have less experience and more tenuous connections to employers than older workers, so they are often laid off in greater numbers and have to compete against more experienced workers for new jobs once recovery begins. They therefore tend to be among the last groups to recover fully from a recession.

Nor do these figures address the challenge of underemployment. Many younger Americans have taken jobs outside their chosen career paths, and since the jobs created since 2008 have predominately been in the service sectors. As the National Employment Law Project noted, as of February 2014

A December 2014 Pew Research Center report compared the jobs lost in the 2008 crisis with those created since the recovery began in 2009: 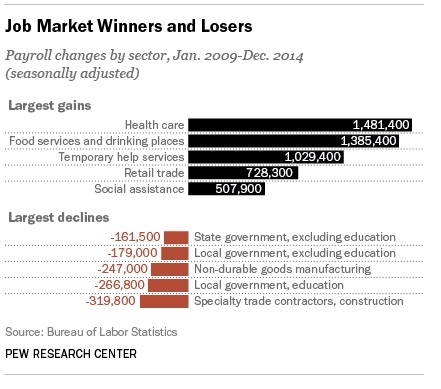 Millennials must struggle to establish their careers under these challenging conditions. The White House report notes that workers who start their career during a recession earn as much as 9 percent less per year "for at least 15 years after starting a career." (Emphasis ours).

This conclusion, when combined with the ten-year window for earnings gains identified by the Federal Reserve of New York study, suggests that many Millennials' lifetime earnings will suffer substantially if more isn't done - and that many of them may be condemned to a lifetime of reduced achievement in unsatisfying jobs.

As we noted in an essay written with Mary Green Swig and Steven L. Swig:

Approximately 41 million Americans now carry student debt, a figure that rose 40 percent between 2004 and 2012. According to the National Center for Education Statistics, the average amount owed for each graduating borrower has risen from less than $10,000 in 1993 to more than $30,000 in 2014 (in inflation-adjusted dollars). 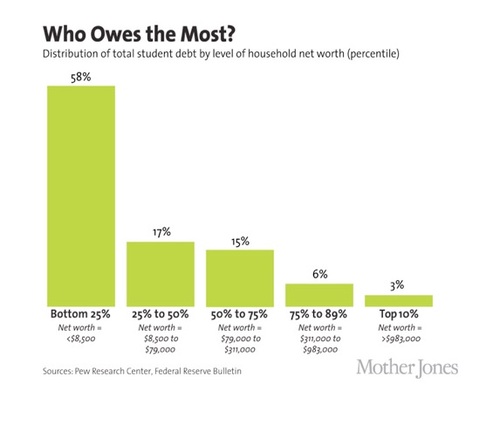 While this burden is most onerous at lower incomes, the debt burden is hampering the financial prospects of young graduates at all but the highest income levels.

Young Americans face a weak job market, crushing student debt, and an economy in which their current earnings determine their financial future.

These three signs add up to one stark reality: A nation which prides itself on being the land of opportunity is closing the avenues of financial advancement for an entire generation. There are ways to change that, but only if we take action. An aggressive job program for younger Americans, combined with student debt relief, would certainly help.

In the end, however, we can't solve the problems of young America without solving the inequality and wage stagnation which hamper the economy for most Americans. We'll need a pro-growth, pro-jobs agenda for all Americans.

One thing is clear: Until we take action, a nation which sings anthems to its young - "teach the children well," "I believe the children are our future" - will have abdicated its responsibility toward its young.

Songs may inspire us -- but numbers don't lie.