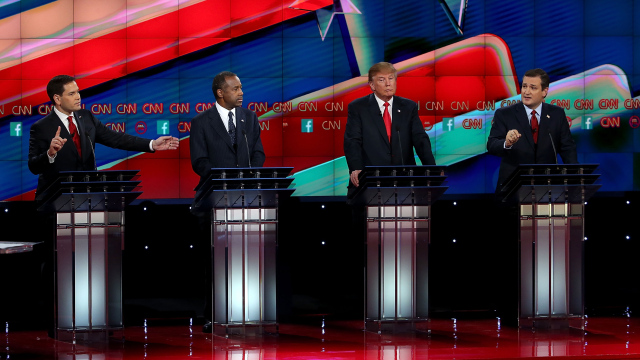 Over the past week, those vying for their party's nomination debated on why they would make this nation more secure and safe than anyone else on the stage. Aside from the gray statements that are already being debunked by fact checkers, I felt the missing piece was a holistic solution to stop the growth and terror of Daesh (otherwise known as ISIS). From banning all Muslims entering the U.S., to carpet bombing entire cities where Daesh militants live (amidst a greater number of normal civilians), to blocking the internet, to killing the families of suspected terrorists, I can only imagine how much the Daesh terrorists enjoyed watching prime video footage they will likely use in their next recruitment video.

And that's the problem. Such rhetoric sadly plays right into the ultimate strategy of Daesh -- to convince naive and disturbed individuals that they are just as strong as the United States, that they have the power to take America down and change the world, and that America has a problem with Muslims. Whenever Daesh can successfully convince people of these things, their recruitment succeeds and their numbers increase. For the record, I am neither for nor against any particular political party. Rather, I find that some who are vying for the presidency of the United States have simply refused to acknowledge the value of Muslims to help in the fight on terror; instead, they espouse rhetoric that has fanned the flames of anti-Muslim bigotry and violence.

This stands in such stark contrast to both President Bush and President Obama, who have called for partnership with Muslims in the war on terror, instead of casting shadows of doubt on Muslims. For example, in his recent address, President Obama stated our commitment to destroy Daesh must include working with Muslims to counter the vicious ideology that Daesh promotes.

But let's talk about the entire solution. There are three steps needed to destroy not only Daesh but the rise of groups like them:

Step 1 - eliminate the imminent threat of Daesh. We need to work with secular leaders in the Middle East to ensure that Daesh faces a physical force that halts its growth, destroys its infrastructure and returns operation of its conquered lands back to the nations to which they belong. A key ingredient missing in the current implementation of this step is secular leadership from Muslim majority countries. Leaders of Muslim nations must take ownership of restraining and overcoming Daesh.

Step 2 - identify the source of funding that is keeping Daesh alive. The leader of the largest organized community of Muslims in the world (the Khalifa of the Ahmadiyya Muslim Community, His Holiness Mirza Masroor Ahmad) has repeatedly made the case that we must follow the money to identify the group(s) providing supply lines to Daesh that allow them to sustain a war that would have otherwise depleted a typical nation's resources. Find the source and cut off the supply of funds and ammunition.

Step 3 - undermine the culture and ideology of groups like Daesh. This is the crucial long-term strategy, without which any effort is doomed to fail. Even if a physical army destroys Daesh, it will simply create a vacuum that will be filled by the next terror group. We can only destroy the platform such terror groups use to recruit ignorant youth when we present a superior version of Islam that undermines the ideology of those espousing a militant perversion of Islam. This is a war of ideas, not guns. As such, this long-term strategy requires partnering with Muslim groups and leaders, as they are in a position to do what nobody else can -- not only condemn an ideology but to systematically destroy the ideology they use for recruitment by proving that it violates the teachings of true Islam.

In short, ideas like banning all Muslims or destroying entire cities are obviously wrong. We cannot solve extremism by resorting to extremism ourselves. We cannot beat bad ideas with more bad ideas. And staying away from the ideological war due to discomfort is also not the right solution. Instead, we need a more thoughtful and mature solution focused on justice and partnership. Don't feed Daesh and their ilk with divisive ideas and rhetoric.

I accept the President's and my fellow Americans' call to action for Muslims and their leaders to step up and work together to decisively defeat the scourge of groups like Daesh. Push back against the disingenuous calls for division and mistrust, and instead let's pursue the 3-step plan together as a united body of Americans.

Originally published at The Daily Caller.