Can a text message save a continent?

As President Obama traveled to Africa earlier this summer, his administration heralded the power of geeks to reshape America's approach to global poverty. Rather than hand out money to corrupt governments or rely on creaky international bureaucracies, a new notion is emerging that if the right technology gets to the world's poorest people, they can lead their own development. Where Washington and Brussels have failed, it seems, Silicon Valley might yet succeed.

The innovations are coming fast and furious: a power-generating soccer ball, a merry-go-round water-pump, and high-profile projects which arm villages with laptops and smartphones. To date, however, these splashy technologies that delight TED-conference attendees have yet to catch fire with the people they've been designed to help.

What if these geek-friendly interventions were designed around a technology the developing world already had? Mobile phones -- chiefly the cheap, unsmart variety -- are used by at least three times as many people in developing countries as in the industrialized world. Could the most transformational technology in Africa also be the least sexy?

This is the proposition UNICEF is testing with its "U-report" network, developed in Uganda and set to launch in five other nations this year. Under the leadership of new executive director Tony Lake, a local team of engineers designed the tool -- a free SMS service with outgoing poll questions and a computer algorithm to distill incoming information -- and let their Ugandan partners figure out how best to use it to promote child health.

Fifteen months later, in a country whose most widely read newspaper has a circulation of 33,000, over 200,000 Ugandans have already signed up by mobile phone. Why?

1) "We wld like to thank the 3 U-reporters of Koboko that reported a death this week.We contacted Min of Health.They confirm this person did NOT have ebola.U r safe." (11/16/2012)

Consider the text message above. Epidemics like ebola or West Nile thrive on information delays -- the slower that doctors and public health workers learn who's sick, the faster the disease spreads and the more victims it can claim. Last November in Uganda's Koboko region near the Congolese border, a man fell ill with ebola-like symptoms and died. Information that would have taken days or weeks to reach the capital through the official chain of command was transmitted instantly and cheaply to the U-report team, who shared it immediately with the Ministry of Health and was able to respond in a few days with the reply above. As UNICEF-Uganda country representative Sharad Sapra describes it, "U-report is helping us move from a 'what happened' to a 'what's happening' system of public health." 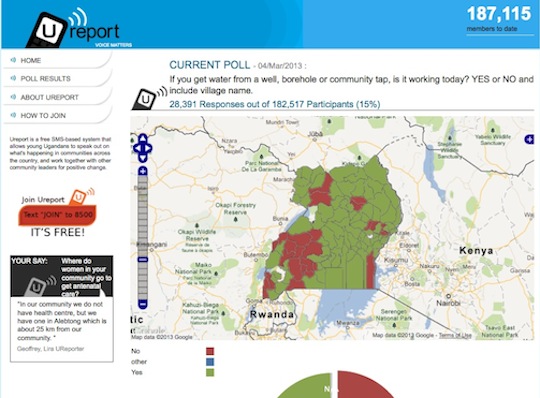 How to stop a drought before it happens

In the first instance, then, these Ugandan men and women became U-reporters because where they live, reliable health information can mean the difference between life and death.

2) "In July you told Hon. Huda how to improve universal primary education in Yumbe. She will be coming to Yumbe to discuss ur ideas at 10:30am,Tuesday at Praford. Will u come? YES or NO." (7/29/12)

The Honorable Oleru Huda Abason speaks softly and carries a big SMS. A former schoolteacher and community organizer who as a girl spent eight years in a refugee camp, Honorable Huda has built a reputation as one of the Ugandan Parliament's most stalwart champions for rural children.

"Where I come from, near the border with Sudan," Huda explains, "we have great difficulty in providing high-quality education for our children. Many children don't have access to a trained teacher, and those that do are often too hungry to pay attention in class." With the help of U-Report, Honorable Huda commissioned a poll targeted at her constituents to find out which educational needs in her district were the most pressing to them.

Armed with more than 100 of these responses, the MP convened a face-to-face community meeting with almost 400 of her constituents -- many of them U-reporters -- in attendance. With the momentum generated by this meeting, and the poll's hard numbers, she got the attention of the education minister and regional administrators, lobbied successfully for two of her district's informal "community schools" to be integrated into the regular public system, and partnered with local authorities to educate parents on providing low-cost, high-energy school lunches for their kids. 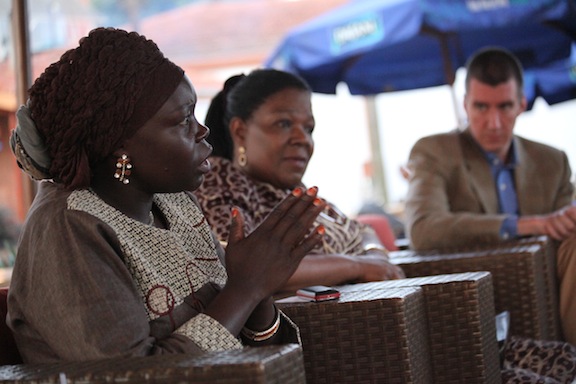 Though uncommonly adept at integrating this new tool, Honorable Huda is not alone. Despite a scant history of this kind of constituent service in Uganda, parliamentary initiatives for child-friendly policies -- backed up with U-report data and U-reporter energy -- are finally starting to proliferate. Recently, members of the Ugandan Parliament returned the government's defense budget in exchange for $31 million in new funding for child immunization, a position strongly advocated by UNICEF and shared by U-reporters; the Amendment to the Children's Act of 2005, which would offer new protections to Uganda's most vulnerable kids, has also been propelled forward in recent months as over 50,000 U-reporters added their voices to the debate.

"The greatest problem I have with U-report," Huda admits, "is that now the people in my district are so engaged, their expectations of government are growing fast! It's up to us to answer those expectations, and I take that duty very seriously."

No matter how promising the intervention, Uganda's problems defy a quick fix. The world's fifth-fastest-growing country (with a fertility rate of 6.2 births per woman), one-third of Uganda's children suffer from chronic malnutrition and only 23 percent are enrolled in pre-primary school (compared to 48 percent in Kenya).

More challenging still are the cultural barriers to progress for women and children. Forty-six percent of Ugandan girls are married by age 18, 70 percent of women ages 15 to 49 in a recent poll thought it acceptable for a husband to beat his wife (60 percent of men agreed), and practices like female genital mutilation and even child sacrifice persist in some areas of the country.

These daunting figures notwithstanding, the U-report model of peer-to-peer education has already shown substantial promise. Uganda was one of the first African nations to halt and reverse the spread of HIV/AIDS with extensive outreach and information campaigns (though the infection rate has ticked up recently to 8.3 percent for women and 6.1 percent for men).

UNICEF's innovation here is simple but revolutionary. Rather than parachute in experts from Europe or America to teach Ugandans about women's rights and public health, allow everyday Ugandans to become the experts and then teach each other. With U-report as the conduit, the 200,000 U-reporters are now the ones driving the debate, exchanging ideas and changing minds.

On February 4, the U-report team texted out, "Feb 6th is International Day of Zero Tolerance to FGM, do you want to stop female genital mutilation in your community? Answer YES or NO and why." As thousands of replies rushed in, U-report's server categorized responses by region and key words, while the U-report team in Kampala sifted for representative responses that could be shared with the whole network. Conscious of its role as objective facilitator, the team highlighted the strong opinions held on both sides, including the text quoted above, which was then relayed back to the entire network. The path toward new mentalities and habits is a long one, but with U-report's help, that conversation is fully underway. 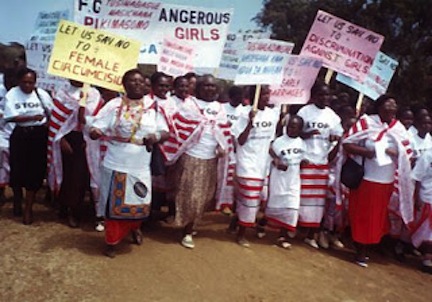 Fighting to make female genital mutilation a thing of the past

The open-source attitude driving the FGM debate is emblematic of UNICEF's approach to its technology. As Sapra insists, "the idea is always more important than the organization." In a break from traditional practice, UNICEF is claiming no proprietary rights to the U-report system or its software; referring to initiatives like Ushahidi in Kenya, Sapra argues that this new wave of technology requires scalability and constant feedback from its users.

What happens when U-reporters seek greater control over the messages sent to the network, or divide into factions on sensitive issues? UNICEF doesn't claim to have the answer, but insists that if the tool is accessible and available, someone or a group of someones will figure it out.

That chance may come soon. The global organization of Boy & Girl Scouts has just announced, based on the success of U-report in Uganda, that it will support the expansion of U-report to 37 African countries, representing 41 million Scouts. UNICEF's Tony Lake asserts that these kinds of innovations in service delivery and real-time data are the wave of the future for UNICEF across its 191 country offices and myriad programs in education, advocacy, and child health.

Ultimately, though, this transformation is not about whiz-bang gadgets or a new crowd-sourcing algorithm. "Technology is only 10% of any social solution," Sapra concludes. "Real innovation is about trusting people with the tools to solve their own problems."

Aleem Walji, Director of Innovation Labs at the World Bank Institute agrees, "the real innovation here is our ability to use the mobile phone to listen at scale and have a much larger conversation. It's finally a two-way conversation and the Government is paying attention in Uganda because the media is paying attention. That's the magic of the Uganda story."

Heralded in this year's Time 100 list, UNICEF has put itself on the vanguard of an entirely new approach: let the beneficiaries of aid become the drivers. If UNICEF's success with U-report is any indication, this step may be one the entire continent of Africa is about to take.