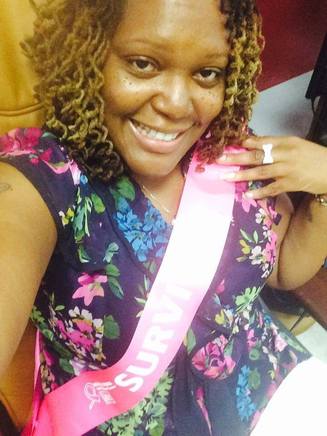 A few months back, I had breakfast with my new friend, Susie. Once all of the polite conversation was out of the way, we started to discuss the more serious issues in our life. My mood was heavy and somber as I told her my story, but it quickly changed and my mouth was agape as Susie relayed hers. While our experiences were similar, she was also a breast cancer survivor who opted for a mastectomy. My surprise wasn't just because she had been through so much. I was amazed because, as Susie told her story, her head was held high and she smiled throughout. After everything that had happened to her, she was genuinely full of joy.

After Susie finished, I asked her point blank, "How do you have such a positive outlook on life given everything that's happened to you?" She responded simply, "I had a praying mother. She taught us to pray about everything."

Finishing our breakfast in silence, it occurred to me that some people fail to display Susie's resilience. And others even spiral into clinical depression. Not everyone has the capacity to deal with life's hardships, but for the clinically depressed, it can be even tougher when family and friends expect them to bounce back the way Susie has.

Because we all can't be like Susie, here are three things we should stop telling the clinically depressed:

1. Get over it. We're all going through something.
According to Mental Health America, many of the 16 million Americans suffering from clinical depression weren't given the tools needed to handle life's challenges or they were hit with so much tragedy at once, it's hard for them to recover. And while everyone eventually experiences difficulties in life, telling them to simply get over it is ungracious. Being diagnosed with depression speaks to one's temporary inability to handle what's been thrown at them. Instead of dismissing their feelings, treat them with patience and understanding.

2. You don't need to take antidepressants.
If someone is clinically depressed, they probably do. Most people get through tough moments in life by going to the gym, talking it out or praying. But for some, that just doesn't work. Depression is more than just feeling down for a couple of days. Depression can be a chemical imbalance that lasts weeks or even months and affects one's appetite, sleep pattern, concentration, speech, etc. The depressed are unable to find joy in their family, friends and activities. Instead, they become withdrawn and stop spending time with others. Antidepressants can help combat these symptoms so one can live their life again.

3. You're not depressed.
There may be times where people witness a depressed person being happy during the difficult stage in their life. That's because depression comes in waves. But when the sadness hits, it's much more difficult for the clinically depressed to bounce back.

I liken clinical depression to the elderly woman who yells, "I've fallen and I can't get up" in the LifeCall commercial. He or she experiences joy, happiness and pleasure during a cancer diagnosis or a family member's death. But when the anxiety or sadness hits, it's harder and takes longer for them to get up.

Having breakfast with Susie gave me a new perspective on those diagnosed with clinical depression. While we wouldn't expect someone suffering from a physical illness to just get over it; we should support and encourage those battling a mental illness the same way. We may not see their scars and bruises, but they're there