Do you love cocktails but hate getting jostled, elbowed, and being forced to listen to Tom Petty's "Free Fallin'" in noisy, crowded bars? Is your home bar there for show because you have no idea how to make a simple mixed drink? Are you hosting a party and want to impress your friends with your mixological skills without actually spending the evening, you know, mixing? Are you just too damn lazy to mix your own damn drinks?

If you live in select major metropolitan areas and the answer to any or all of the above questions was "Yes," "Hell yeah," or "Damn skippy," then you are in luck. Technology has not yet enabled us to download a cocktail but it has enabled us to click a few buttons and have all the fixin's for a cocktail delivered right to our doorsteps. Part of my job involves going to bars and writing about cocktails. And I have accumulated a small arsenal of cocktails which I can make competently enough, along with the tools required to make them. But I'm also pretty lazy, so give me the chance to stay home and let someone else do the work for me and I'll jump at it. I checked out three organizations, with varying degrees of sophistication and with varying levels of actual effort required. And my "research" involved staying home and drinking. It was a wonderful thing. And here are the results of my investigation.

First up was Be Mixed. I was most suspicious of this one, because their line of three flavored cocktail mixers (rolling out nationwide and online) are sugar-free and calorie-free. It was also the only one of the three that did not include booze, which means you may have to actually put on shoes and go outside -- though if you're reading this, you probably have tequila, bourbon and vodka on hand already. My experience with low-cal cocktails was limited to Bacardi & Diet Coke, which can be, if you're in the right mood, something short of unpleasant; a couple of ill-advised stabs at making simple syrup with Splenda instead of sugar; and Skinnygirl Margarita, which tastes like you'd imagine a watered-down margarita made with cheap tequila and bottled lime juice to taste. So the bar was set pretty low for Be Mixed.

But I was intrigued. The backstory is great -- it was developed by two Harvard Business School grads who love to get their drink on, but one of them has Type 1 Diabetes and thus has to eschew the tasty but sugary mixers found in so many cocktails. She got tired of drinking vodka sodas and decided to take matters into her own hands, with the assistance of bartenders and nutritionists. Now THAT is what I call empowerment. And the results are, shockingly, not bad. They're not going to make me forget the drinks at the Clover Club or Attaboy, mind you, but for what they are they're quite tasty. And easy, too -- just mix a bottle of the mixer (they come in packs of 12 for $33) with two ounces of the relevant spirit, add some ice, an optional splash of club soda, and a shpritz of lime (sadly, you may also have to leave the house for those as well) and you're set.

The drawback of Be Mixed mixers is that they lack the thick, mouth-coating texture that "real" juice-and-syrup-laden cocktails provide. Which means their "Margarita" doesn't really feel like a margarita. But it still beats Skinnygirl hands-down. And the cucumber-mint mixer, which is meant to be drunk with vodka, is flat-out delicious. (Gin snobs, it's very nice with gin as well.) In fact, I'd drink any of the three mixers again voluntarily -- the third flavor being ginger-lime, which makes an interesting combo with bourbon. That's something I never thought I'd say about a calorie-free mixer. 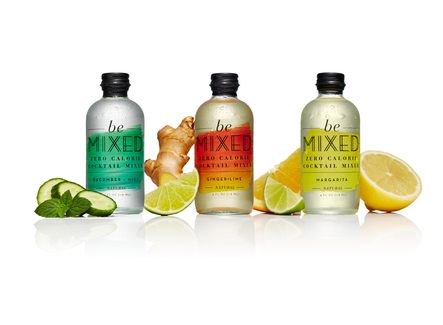 If you don't care about the calories and you want to do as little work as humanly possible while still technically making a cocktail, then Instapour may be up your alley. Working with spirits brands including Caliche aged Puerto Rican white rum, Casamigos Tequila and Tito's Vodka, mixmaster/GM Warren Hode has come up with semi-do-it-yourself cocktails so foolproof that even your dog would have a tough time screwing them up. They provide a bottle of the booze, a pre-batched mixer made with fresh-squeezed juices, a cocktail shaker, and even pre-sliced garnishes so you don't have to worry about slicing your thumb or washing your knives or anything. You mix up equal parts booze and mixer in a glass with ice, add garnish, and bingo gazingo, you're all set. 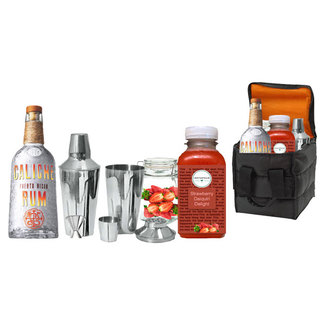 Instapour: delivering cocktails to your home in a cool reusable bag.

I haven't tried all of Instapour's selections (even though I'm a Yankees fan I'd still love to try their Mets-themed "#LGM Cocktail"); the ones I've tried have been a little too sweet for my tastes, but that can be remedied, as can so many of the problems in our lives, with a liberal dose of fresh lime juice. Kits, which are delivered in very cool looking custom reusable bags, run in the $40-50 range and make 6-12 drinks, depending on what you order. A subscription costs $50 a month. Not a bad deal compared to buying drinks at your local watering hole, and you save on tips besides. Alas, Instapour is only available in New York and Los Angeles right now, but when in town....

Cocktail Courier is the most sophisticated of three, in terms of cocktails, what ingredients you get, and how much is demanded of you, the home bartender (don't worry, it's still not very demanding). It's basically like Blue Apron for cocktails; you get all the fixin's for some pretty fancy cocktails based on recipes from top bartenders nationwide (mostly based in New York, Chicago and San Francisco), including spirits, mixers, garnishes and fresh fruit. 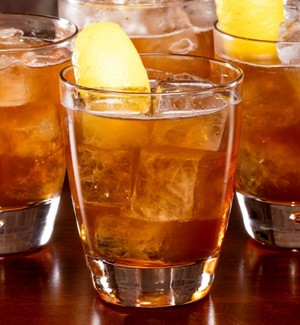 An example of the swanky cocktails you can make all by yourself, with a little help from Cocktail Courier.

Your lazy ass will unfortunately have to do a little measuring, slicing, squeezing and shaking. But while it's not labor-free, it's also pretty idiot-proof as well. And you get some sensational drinks which use ingredients you weren't likely to have lying around the house, like the Lexington Old Fashioned from Jim Palumbo at New York's The Up & Up. Your kit comes with Bulleit bourbon, maple syrup, lemons, two types of bitters and cayenne pepper. The result is pretty close to what you'd have if you'd actually bothered to put on some clothes and headed to the Up & Up yourself -- and at $42 for 6 cocktails, you save some money and get the satisfaction of telling your awed friends, "Yeah, I just whipped that up myself." Cocktail Courier is currently available in 40 states, and you can order a la carte or subscribe for $39.99 a box (they'll hook you up weekly, twice-monthly or monthly), which gets you 4-8 drinks depending on the recipe, along with free shipping.

As good as these drinks are, and as handy as these services may be, I wouldn't recommend using them all the time. Getting outside once in a while is a good thing, after all. And bars can be crowded and noisy and annoying, yes, but there's also something to be said for having a professional bartender mix you a drink right in front of your eyes. But when the little introvert in your head takes over the machinery and demands to binge-watch Netflix -- something that happens with me, oh, about once a week or so -- it's good to know you've got options.