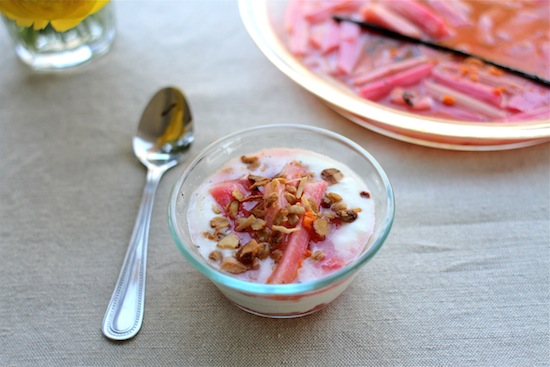 There are so many things that confuse me in this world. Like, what is wrong with all those people who don't like cilantro? Or, why do men always assume that women want to date after they sleep together? Because they usually don't.

But what really gets me -- what really twists my knickers -- is why so many people overlook rhubarb as something delicious to eat on its own. Growing up, I ate rhubarb exclusively with strawberries, usually in a crumble, and I feel like I'm not alone in that. I'm not blaming my parents for robbing me of a seminal flavor in my taste bud development, but I kind of am. They really messed that one up! 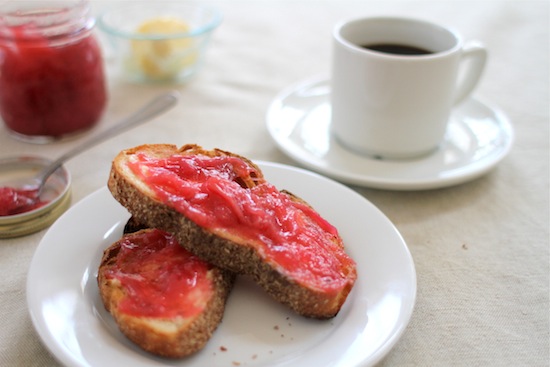 I guess it makes sense on some level. Rhubarb is super tart, so it comes by the natural sweetness of a strawberry honestly. If you eat it raw (which I always do and always regret, like the dog who still doesn't get that the fence is electric), it's like sowing a million warheads into your cheeks. But roast it like a normal human with sugar, some orange zest, vanilla and a little leftover wine and it really sings. The result is so delicious, so beautiful, so uncannily pink that it makes me believe in a higher order -- well, almost. 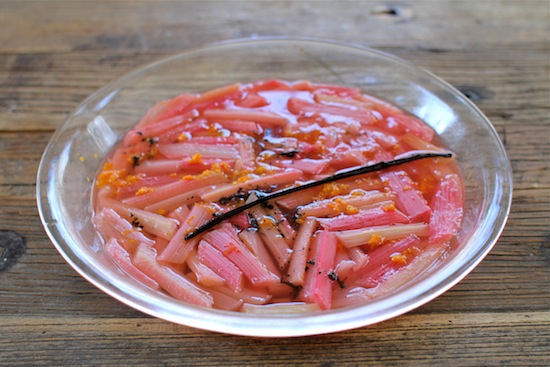 You would think, however, that sugar is an easy enough antidote to rhubarb's acidity that we would have acknowledged its standalone genius. But that's not the case, making me think that our issue with rhubarb is much more fundamental. Maybe it's because rhubarb was used historically as a purgative and those bad memories linger, or maybe it's because we're not sure how to define it and that makes us anxious as creatures who like to categorize: is it a fruit? A vegetable? A massive, mutant celery stalk?! Well, I figured if it's categorization we're all grasping for, I just may be able to help.

Now, for better or for worse, I grew up around a lot of people who love the law. It was good that time I got nabbed for drinking a beer underage (just kidding, that was a different family member), but bad when every, and I mean every, conversation my family has around the dinner table touches it somehow -- cue my narcolepsy, face in pavlova. Nonetheless, these law-lovers have taught me that when we need to define or contextualize an issue, we can usually look to our laws to guide our answers. 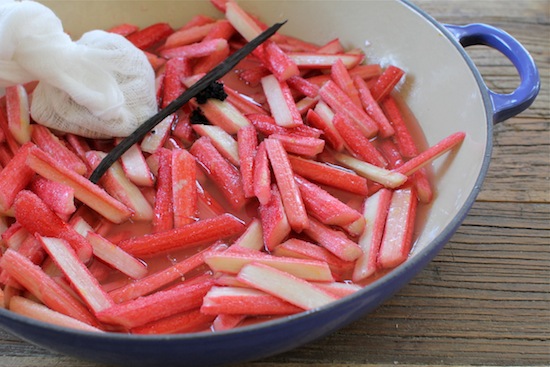 Desperate for guidance, I took their advice and found that rhubarb totally has a legal precedent. Phew! It turns out in 1947 a U.S. Customs Court in NY ruled that rhubarb is a fruit, even though it fails the high-ly legitimate seed test, because that's how we use it: we dessert it up. It's a bit short sighted - the judge clearly didn't realize Brits pair it with savory eats like pork to great effect -- but it works for me. Case closed, I'm in.

It's probably clear at this point how much I love rhubarb. I would marry it if I wouldn't face the stigma of a bi-species romance. This post is a tribute to that love and the recipes are super simple and dessert-y, not surprisingly. I've roasted it and made a jam of it, and included a great rhubarb cocktail. It's the type of drink that will impress your friends both because it's delicious and also because its color really entices. So get your hands on this stalk while it's in season! 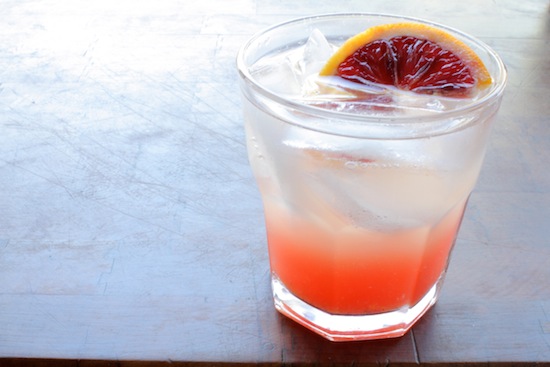 Preheat your oven to 375 degrees before washing the rhubarb and trimming the ends. Cut each stalk down the middle and then slice into 2" thick pieces. I like to slice them on the diagonal simply because I think it looks prettier. 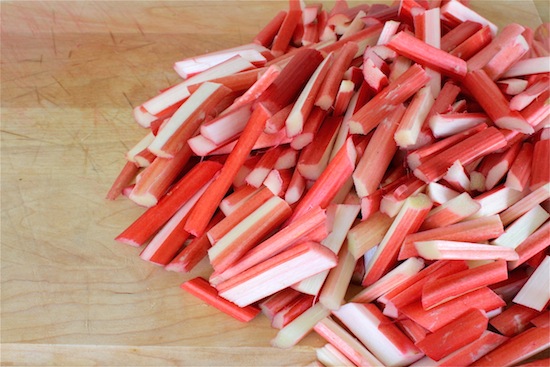 Sprinkle the sugar over followed by the orange zest and juice. Split the vanilla pod down the center and scrape the seeds over the rhubarb. Give it all a nice toss at this point. Throw on the vanilla pods, pour over the wine and cover with tin foil. Roast the beauties for about 25 minutes, or until they're nice and soft. They're delicious as a dessert, served with shortbread or some vanilla ice cream (or both, of course), but they're also delicious as a breakfast accessory. Roasted rhubarb, yogurt and granola is like heaven on earth.

Wash the rhubarb, trim the ends, cut down the middle and slice into 2" thick pieces just like above! Put into a bowl with the sugar, lemon zest and juice and toss it all together. Cover and let it macerate for an hour or two. This step draws the juice out of the rhubarb and produces a syrup that helps it hold its shape. Unlike rhubarb, lemon is super high in pectin so the addition helps the jam set.

Now you can sterilize your jars. Preheat your oven to 150 degrees and make sure all the jars and lids are super clean. Bring a medium sized pan of water to the boil. Put the jars in the oven (I always put them on a baking sheet) and boil the lids for at least 10 minutes. This method is really just for making jams at home. If you ever want to sell your preserves, I suggest looking into more intensive sterilization methods, but this one works splendidly for me! 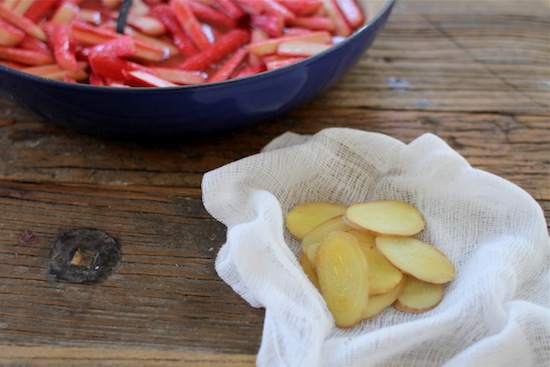 After you let it macerate, put the rhubarb in a wide, heavy-bottomed saucepan with low sides. Scrape the seeds out of the vanilla pod and throw into the pot along with the pods. Then take your ginger and slice it thinly to expose the inside as much as possible before wrapping in cheesecloth and placing in the pan. Bring the mixture slowly to the boil, gently mixing until the sugar has melted, and boil rapidly for 10-12 minutes. Ladle the jam into your jars and seal!

Excess rhubarb syrup is a by-product of the first recipe. And it's amazing. While it's roasting, the rhubarb releases juices that mingle with the vanilla, sugar, orange and wine. You won't need all the syrup it produces for dessert (or otherwise) so you can pour some off to make cocktails. Shake up the gin, syrup and orange juice, pour into a tumbler and top off with prosecco. Done! 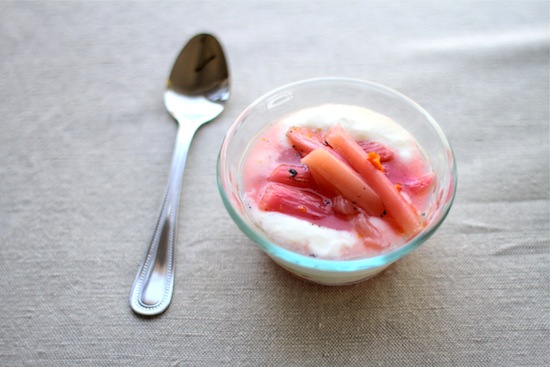 Look out for our blog, www.aliandecho.com, coming soon!