Whenever two celebrities die within a relatively short span of time, people think "Things always happen in threes" as they wait for a third death to be announced. But when one looks at three-sided geometric structures, it becomes obvious that isosceles and scalene triangles may collapse under stress. Only the equilateral triangle stands firm.

How does the concept apply to romantic triangles? When all three sides have different dimensions, the chances of a broken relationship are very high. When two sides are of the same depth, their relationship can probably withstand the lengthening or shortening of the third leg of the triangle. When all three members have equal emotional investments or buy-ins, you have something very rare and interesting.

Two new films probe the delicate forces at work when a third person starts to exert his influence on a couple's home life. In each case, there are no easy answers.

Written and directed by Eldar Rapaport, August examines what happens when a gay couple's stability is up-ended by the return of one man's ex-lover. As the movie begins, we see Troy (Murray Bartlett) interviewing for a job-opening with a Los Angeles-based firm. Troy has been living in Barcelona for the past five years and claims that he is ready to move back to California. Having heard this story from one ex-pat after another, his potential employer is understandably skeptical of Troy's motivations.

To no one's surprise, Troy has an ulterior motive. Before leaving California, he abruptly severed his relationship with Jonathan (Daniel Dugan), who is now approaching his 30th birthday. As the kind of player who can never leave well enough alone, Troy is eager to see if the old black magic is still alive in their relationship.

But there are complications. Jonathan is now in a relationship with a handsome Latino named Raul (Adrian Gonzalez), who married Jonathan's friend Nina (Hillary Goldsher) for immigration purposes. Nina's boyfriend, Nick (Mike Vaughn), is a devoted partner who would happily have married Nina if she hadn't already been legally married to Raul.

When Troy's gay friend, Devin (Brad Standley), meets him for a drink where Raul just happens to be the bartender, he inquires if Troy, Daniel, and Raul have already done "the threeway thing." Meanwhile, Troy's brother, Sean (Bernhard Forcher), has a new child and would love for his brother to be available as an uncle. But Sean knows Troy well enough to sense that his brother will return to Spain after having caused a significant amount of havoc in everyone's lives. 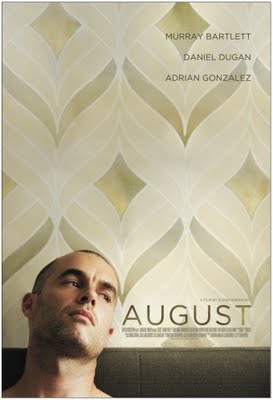 Los Angeles may be going through a hot spell, but there's no mistaking the real reason why Daniel has let Troy give him a matching buzz cut. In his filmmaker's statement, writer/director Eldar Rapaport writes:

The movie is based on a similar event that happened to me many years ago. I was studying on Boston at the time and I returned to Israel for a homeland summer vacation and decided to call on my ex -- whom I hadn't talked to for a long time. We had had a crazy, intense summer romance that I had ended abruptly. Meeting for coffee was very awkward and fraught with romantic and sexual tension. You could have cut the air with a knife. At the end of our rendezvous, his current boyfriend showed up on a white Vespa, literally snapped up my ex, and they both disappeared into the horizon. A classic moment.

Years later, I found myself on the other side of the romantic brokenhearted fence. In the back of my mind I remembered the 'curse' he once put on me. He said, 'I wish one day you'll understand what it's like to love someone more than they love you.' I also pondered something else someone once said to me when I was heartbroken: 'It's all about timing, how we synchronize with each other.'

I used to think that if you're in love with someone, it will work out and reasons like 'I'm not ready' are nothing but pale excuses. In retrospect, however, I think if two people are in different places in their lives, it will take a mountain to get them to move from where they're at. With August, I wanted to explore this subject, but in a style that is rarely done in American queer cinema. Something intimate, beautifully shot, emotional. A Last Tango in Paris meets In the Mood for Love. Characters that are gay but share the same universal dilemmas: relationship, life, career, and sacrifices. Shot handheld and close. It should never evolve into a melodrama. Nor should it provide solutions. I set this film to the wonderful melodies of Israeli musician Surque (with additional music by Harel Shachar and his band Anistar, who provided the original inspiration for the film) to contrast with the slick modernity of life in Los Angeles, to transport the audience to a different place, and heighten the emotional introspection of our main characters."

By using extremely intimate closeups of the three gay men, Rapaport catches the internal tug-of-war pulling at their heartstrings. Daniel is pliable, a bit naive, and easily succumbs to Troy's charms again. Raul is concerned, but sufficiently world weary not to let Troy's games get to him. And, if Troy could be honest with himself, he'd admit that he's meddling in Daniel's relationship more for the sake of ego gratification than any serious hope of getting back together as a couple (he's been house sitting in Los Angeles all summer, has gotten a job, but still hasn't made any plans to go looking for an apartment).

The situation finally reaches its climax when all three men get drunk, come back to Raul's apartment, and end up having a threeway. When Raul insists that Daniel and Troy start kissing in front of him, it becomes obvious who's really in charge. It doesn't take long before Troy is headed back to Spain.

Thanks to the ravishing cinematography by James Adolphus, the strong visual appeal of the three male leads, and a wonderful musical score, August becomes a movie about shared intimacy and taking responsibility, rather than a gay man's manual on how to ruin your ex-lover's current relationship. Here's the trailer:

Written and directed by Tom Tykwer (Run Lola Run), Three offers a fascinating look at how romantic crises can give rise to the oddest opportunities. It also offers some exquisite nighttime shots of Berlin's Badeschiff (a floating public swimming pool).

At the core of the film is a couple that has been living together for 20 years without getting married. Simon (Sebastian Schipper) is an "art engineer" whose mother has been dying of cancer. At the same time that he is trying to cope with his mother's terminal illness (her will states that her remains are to be "plasticized" and put on display as part of an art exhibit), he receives a wake-up call about his own health.

After procrastinating, he finally visits a doctor who tells him that he has testicular cancer and must undergo surgery that night. His attempts to contact Hanna (Sophie Rois) keep reaching her voice mail. As he awakens from surgery, he recognizes one of the operating room nurses as a former girlfriend, who informs him that she had an abortion 17 years ago when it became obvious that he was much more interested in Hanna.

Meanwhile, Hanna has met Adam (Devid Striesow) as part of her work as a journalist. A charming genetic scientist who plays sports and sings in a choir during his spare time, Adam the divorced father of an adolescent boy who is much more interested in virtual reality.

At the same time Hanna is getting to know Adam on an intimate basis, she and Simon agree to finally get married. Neither of them has ever really wanted children and they joke about how, if they did have a child, theirs would be the first divorce where no one wanted custody.

Soon after his operation, Simon goes swimming at the Badeschiff one night, where he ends up sharing the pool with Adam. When he explains that he's recently had surgery to have a testicle removed, Adam asks to see the surgical scar and proceeds to give Simon a hand job. The release is more intense than Simon ever anticipated and he starts to wonder if he might be bisexual, or perhaps even totally gay.

Soon Simon starts dating Adam with no knowledge that Adam is also dating Hanna. One evening, as Simon and Hanna are at an art exhibit, they see Simon walk in the door. Their reactions are identical -- they quickly head for the restrooms and decide to leave the gallery.

As the intensity of each couple's relationship starts to grow, Hanna receives shocking news. After years of being unable to conceive, suddenly she's pregnant with twins. Frantically, she rushes to Adam's apartment to tell him the news, but he's entertaining a guest. You don't need to be a rocket scientist to figure out who's in Adam's bed.

Three is nearly two hours in length and takes its sweet time getting to its riveting climax. But Tykwer handles the simultaneous revelations of infidelity with an odd grace that leads to a fascinating ending. His film is immensely enhanced by Frank Griebe's cinematography. If you're the kind of person who leans toward polyamory, you'll find Three to be an extremely satisfying drama. Here's the trailer.