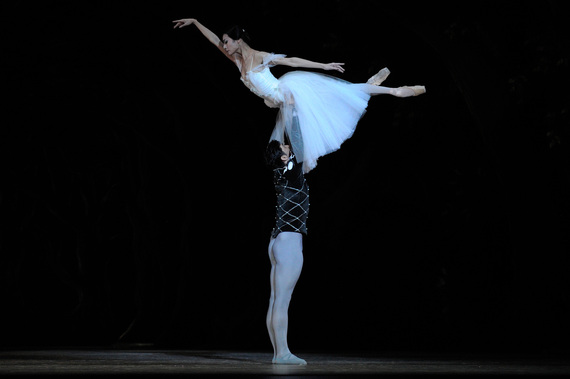 San Francisco Ballet unveiled its latest Parisian import in Giselle on Sunday afternoon at the War Memorial Opera House, less than 24 hours after fielding a much-adored veteran in the same role in its season opener. With three more principal ballerinas poised to rotate through the iconic role through February 2, the fan clubs are buzzing.

Former Paris Opera Ballet soloist and newly minted SFB principal Mathilde Froustey gave a marvelously naturalistic performance on Sunday, as if born to dance the wide-eyed peasant girl with a heart of gold. Particularly entrancing are her piquant shouldering, supple torso, and million-euro smile. Distraught to learn that her fiancé was actually a prince who had been slumming it in the village, and who was engaged to a haughty noblewoman, she grabs his sword and drags it around the village square. At this performance, the sword's crossguard unexpectedly caught on her rival's sumptuous robes and ripped a prominent hole in her skirt. A felicitous accident that should become a permanent feature of Act I.

Transformed into a ghostly spirit in Act II, Froustey managed to appear lighter-than-air while still retaining the flesh-and-blood charms of an innocent young maiden, albeit a much sadder one than in Act I.

The evening before, Yuan Yuan Tan set the bar very high with her somewhat more high-strung interpretation of Giselle in Act I, her twisted mad scene, and her devastating Act II metamorphosis into an eerie, otherworldly creature.

A casting coup paired her with the gallant, impetuous Davit Karapetyan in the role of Giselle's faithless lover Albrecht, and faced her off against the glorious Sofiane Sylve in the role of Myrtha. 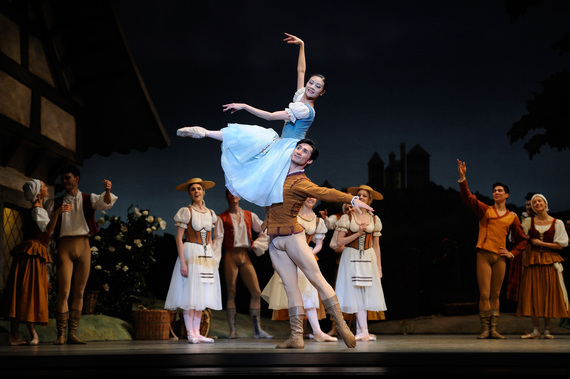 Tan's performance is full of nuance. While besotted with Albrecht, who had disguised himself as the peasant Loys, her Giselle betrayed a slight unease from the outset, as if she sensed that he was not entirely on the up and up. Throughout, she softens her frame - which appears sharp and angular, even brittle, in more contemporary work - and anchors her movement with her heartbreakingly beautiful titanium insteps.

The true heart of this ballet, however, is not the delicate peasant girl gone mad, but Myrtha, the fearsome Queen of the Wilis. Sylve presents the full complexity of this character: a woman once wronged, who wields a terrifying power and metes out her own brand of justice, but is occasionally stirred to self-doubt. There is a fierce beauty to Sylve's implacable yet ethereal technique, a soft finish to her steely balances, a poetic pliancy in the upper body and in her softly bounding leaps.

Froustey was pitted against fellow newcomer Simone Messmer as Myrtha. This former American Ballet Theatre soloist -- who has distinguished herself most recently in the work of Alexei Ratmansky -- gave us an icy, sullen Myrtha, a one-note reading of the role, her strident interpretation and baleful expression verging on camp. The stiffness of her upper back and shoulders contrasted unfavorably with the fluid upper bodies of Julia Rowe and Shannon Rugani in the Lead Wili roles. (Rugani in particular looks like a good bet for the next generation of Giselles.) Messmer's soaring jumps were thrilling, however, and her all-out hostility toward her male victims and her censure of Giselle were priceless.

Jumping is a favorite sport among the Wilis. The leads on opening night -- Dores André, with her lush Romantic body lines, and Sasha De Sola, with her daring balances -- possess astonishing sauts de basque. Which purists in the audience decry, as the Romantic ideal is to rein in any excess -- in elevation, in extension, in the speed of turns. Paris Opera Ballet lays claim to the original 1841 production, and attempts to keep the Romantic fires burning, but even the Parisians now have the Wilis do the famous traveling hops in arabesque with their backs pulled up instead of drooping forward. Ballet to the People favors Paris Opera's Second Act only because their magnificent, painterly set and lighting design ramp up the spookiness. She has grown weary of the cookie-cutter corps, however, and finds San Francisco's Wilis, with a little more diversity in their look, to be as technically strong and more interesting than the Parisian and Russian armies. They wind and unwind in lovely, organic formations, a little less severe than Paris Opera's. Ballet to the People is partial to the Paris Opera machinery that whips off the Wilis' veils as if by magic -- surely San Francisco could employ the same technology that sends dozens of chairs floating up to the rafters in Christopher Wheeldon's new Cinderella.

Giselle being a firmly feminist ballet, the male characters often have a hard time winning our sympathy. Davit Karapetyan is a gratifying exception. He played Albrecht as ardent and headstrong but fundamentally decent, crushed at the fall-out from his careless deception. Tender and solicitous of Giselle, we knew that he had truly fallen for her. He and Tan play out all the treacherous angles of this relationship with great skill and abandon. 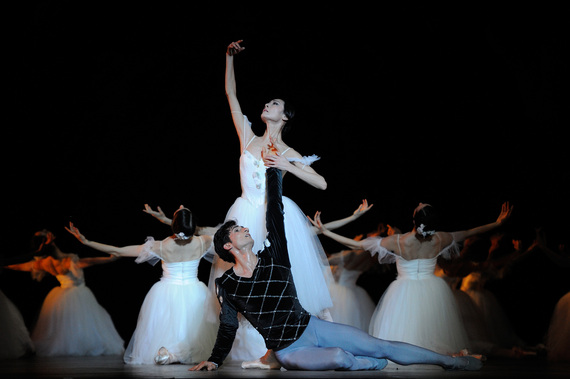 Partnering Froustey, the gorgeous Tiit Helimets was more aloof and self-absorbed, the entitled aristocrat to whom wooing village maidens was a bit of a sport. It's a wonder those village folk didn't see through him right from the start. His admirable, clean allegro technique and beautiful lines lacked Karapetyan's raw emotional attack. When Giselle confronts Albrecht after Hilarion exposes him as a fraud, Karapetyan pushes Tan away from him, guilt written all over his face. Helimets merely turns away from Froustey and from the audience, so we don't get to read his face at that dramatic moment. In Act II, Helimets' string of entrechats sixes (beaten jumps) flickered lightly and brilliantly, whereas Karapetyan's had the power of a rocket launcher -- both had the audience in raptures, but Karapetyan drove home the desperation of the moment when Albrecht is being sentenced to death by the imperious Myrtha.

Both men were ill served by their glacial, unimaginative entrance in Act II, one of few anemic moments in the otherwise stellar staging by Helgi Tomasson.

Another weakness was the stiff, insufficiently dramatic mime by Giselle's mother, Berthe, portrayed in both performances by Anita Paciotti. This is the crucial moment when Berthe conveys the backstory of the Wilis -- the ghosts of jilted maidens who died before their wedding day, and who are doomed to haunt the nearby forest. We should not have to read program notes to understand the story, but this particular mime passage does not give us much to hang our hat on; the audience risks wandering blind into Act II, wondering why these bridezillas look so unhappy.

Similarly, the character of Bathilde, Albrecht's aristocratic fiancée, is given too little to do, apart from condescending to Giselle and having her skirt ripped to shreds. Many productions flesh her out either as a shallow, vain upper-cruster, or a more generous soul, who truly takes an interest in Giselle -- that is, before the peasant girl starts flailing around with a sword. A French production goes so far as to suggest that she and Giselle are half-sisters, that Bathilde's father, the Duke of Courland, had a fling with Berthe many years ago; his awkward encounter with Giselle and her mother in the village square adds a welcome frisson of reality-TV excitement to the proceedings.

Ballet to the People would also have liked to see more of the passionate Pascal Molat in the pivotal role of the gamekeeper Hilarion, the astute villager who detects Albrecht's phoniness. His steadfast devotion to Giselle was painful but thrilling to witness and, unlike other interpreters of this role, he communicated his emotions principally through his body, not by contorting his face.

A unique triumph of Tomasson's production is his transformation of the traditional peasant pas de deux in Act I into a charming and quirky pas de cinq, a gratifying showcase for soloist bravura, but also a reminder of the villagers' pride and spirited elegance, in contrast with the aristocrats' stiff, pompous manner. (Though the peasant women's dresses are sorely in need of lightening up: their puffy bodices and sleeves are almost comically padded. And while we're shopping, let's spring for some more becoming hats.) Daniel Deivison and Hansuke Yamamoto delighted us with their light, soaring beaten jumps on Saturday night, while Sasha De Sola's quicksilver feet, vivacious upper body and unerring musicality deserve a ballet all of their own. On Sunday, Wei Wang thrilled us with his clean, explosive and expansive technique, while Dores André flaunted her stunning balances and huge jumps.

Martin West conducted the superb San Francisco Ballet orchestra for both casts and delivered the finest rendition of Adam's score that Ballet to the People has ever heard: crisp, poignant, and blessedly free from the cheesy, circusy flourishes that afflict other arrangements.