Since I met Arianna Huffington last week, I've been thinking about the obnoxious roommate in my head. In her book Thrive, Arianna draws attention to the voice in our head, the "obnoxious roommate," who feeds us insecurities and doubts. It was no coincidence that I met Arianna during her conversation last week with Amy Chua at Yale Law School, where fear of failure can be a strong motivator. Sometimes the roommate's voice is someone else (Tiger mom, anyone?), but most of the time it's you. And it still gets me. Why haven't I published more articles this semester? I'm being lazy. I'm just not as super-human as so-and-so, who can survive on four hours of sleep and churn out twice as much. 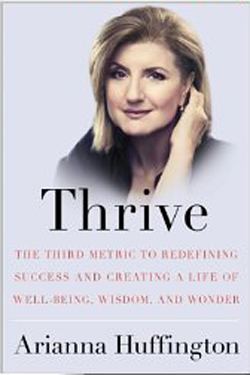 Thrive teaches us to evict this obnoxious roommate. It is the book you are glad someone immensely successful wrote, because it validates what we can all intuitively understand. It is a book of evidence we can wave triumphantly at a world that now values stress over productivity. This coming weekend, the Thrive conference in New York City attempts to do just that. Arianna reminds us that we need to nurture ourselves to be successful. That it isn't smart to be sleep-deprived. That we have become workaholics and need to wean ourselves off as a society before we spiral into failure. But how can we silence the obnoxious roommate in order to thrive, when that same critic generates our drive?

As I walked through the campus of my alma mater, Harvard, this past weekend, I recalled the strength of that incessant voice. In an environment where you are graded in comparison to your peers, every hour you sleep or relax is an hour behind your peer who's going to get that higher grade. Our conversations would often include a competitive banter of all of the things we have to do: I see your three exams, two papers, and two interviews and raise you my three exams, two papers, two interviews, and a marathon! We were at the same time afraid of failing at our massive workloads, and proud that we were the type of people to take on so much. 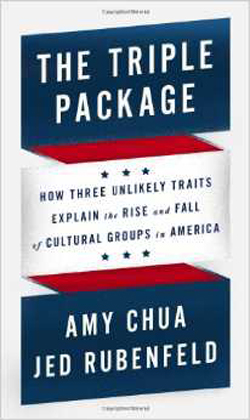 This is the stuff of The Triple Package. While there has been criticism of Amy Chua and Jed Rubenfeld's new book, few have disputed the major premise that successful people are driven. One of the most distinguishing characteristics of successful people is that they are good at controlling impulses. They are Aesop's ant, when people around them seem to be having more fun -- for now. There's that voice again, telling you not to take that nap when you have a project to ace. This impulse control is coupled with an odd partnership between insecurity and confidence that you are endowed with special talents and privileges. Everyone has a talent or skill to contribute to the world, and some of us are conscious of or have the means to discover it. Privilege is something that's harder to come by, but those of us who have or acquire it often know we must take advantage of it.

The opposite side to that coin is the fear that we won't live up to our talents and opportunities, a self-doubt I have seen plague even very successful people I know. It's the possibility that we are bluffing to ourselves about our own potential. That's the doubt that drives us up and away from failure.

But if that's all that generates your drive, it is exhausting and unfulfilling, is the crux of Thrive. I have seen this in my own life. We spend the formative years of our lives in education, from pre-K up. Now school, not just the workplace, has become a place of hours crunching. By the time I finished college, I was burned out of school and felt lost. I had lost sight of what I actually wanted to do with my life by trying to do everything.

Then I started to recharge. I began valuing even more the things that kept me grounded -- my family, friends (whom I had neglected in my busyness), and prayer. In Islam, the day is broken up into five parts for prayer. As Muhammad Ali famously noted: "If a man takes five showers a day, his body will be clean. Praying five times a day helps me clean my mind." You are forced to leave aside the mundane stresses of the world in that fifteen minutes to attain the "sweetness of prayer," a humble state of mind before God. I have come to value even more the meaning of the gentle physical movements, the words of worship, and the reflective supplication afterwards.

Arianna, who is deeply spiritual, devotes a large chunk of her book to prayer and even reflecting on our own mortality. It is a breath of fresh air from most books on success. In the constant work-cycle of today's world many of us dismiss the value of meditation, service to others, and reflection. At times, we even feel guilty for the time we spend doing it.

By carving out time away from being busy, I have been able to think clearly about my long-term goals. I have avoided jumping on the treadmill when I know that I should keep going at my own pace. And while I can still feel guilty about it, I sometimes slow down to soak in the moment.

So what happens when thrive meets drive? The way I see it, you stand between the two and hold both tightly by the shoulder. It takes a lot of self-control to find the right balance. You need enough drive to not become complacent, but enough thrive to realize what it's all for. Where is the passion, where is the you, if you live a life without well being, wisdom, wonder, and giving? People with money and power are on a precarious two-legged stool, according to Thrive. We as a society need to add a third one if we want to be successful and sustainable. While it will take a bit more time for our society to grasp this understanding, you can start with yourself.

This isn't psychobabble, it's your life. Here's to living it to the fullest.