A multi-hued world swirled around a single lobe of coral in the shifting current. Yellow, orange, pink, purple, red, and electric blue fish darted among filmy tendrils of seaweed. Bigger fish and turtles floated by. Parallel worlds of coral, like a giant rock garden, covered the reef as far as I could see.

I flipped on my back and poked my head out of the water to clear my facemask and felt like I had slipped through a wormhole into another universe. Vast, open seas and volcanic islands surrounded me. Except for the snorkels of my shipmates poking out of the water several meters away and our skiff with its watchful crew bouncing lazily on the swells, I was completely alone.

We were snorkeling far offshore Komodo Island in the Lesser Sunda Islands of Indonesia. It was day 3 of a 7 day cruise (hosted by Sea Trek Bali), in a 40 meter long, fourteen passenger, traditional Indonesian boat. Our route took us from the island of Flores, through Komodo National Park with stops at other islands along the way, to Bali. 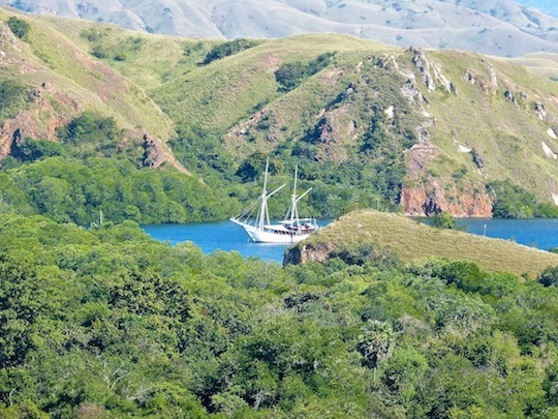 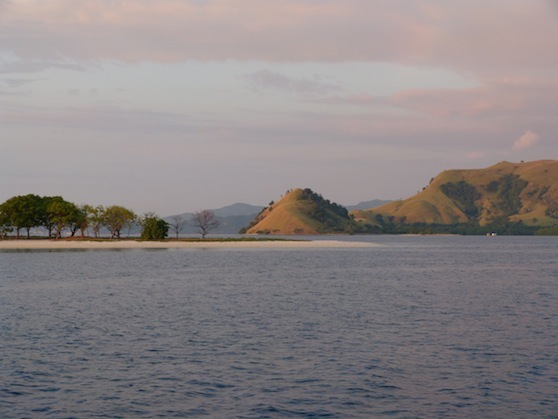 When we weren't snorkeling, hiking and kayaking, we were content to converse, read, and lounge around deck catching the soft, moist breezes off the water. It was a lazy, sleepy seven days. By the third day, the combination of sun, sea, heat and humidity had turned my mind into a cheese omelet. 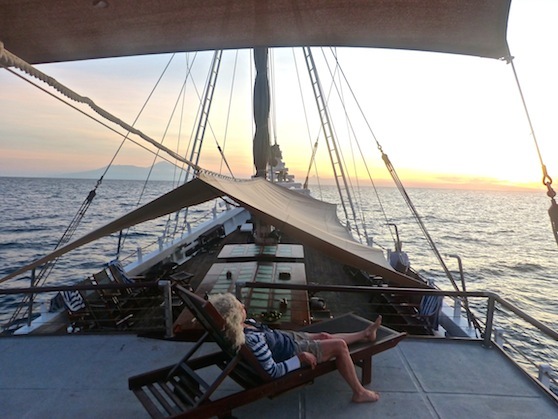 Despite the obvious attractions of world class snorkeling, scenery and indolence, the main draw for me were the Komodo dragons, easily one of the most sinister animals I have come across in decades of travel to faraway places. They look like refugees from Jurassic Park. Their ravenous ferocity is legendary; they have been known to eat goats whole, jamming partially digested carcasses against trees to force the "morsels" deeper into their gullets. And their bites - a toxic mix of venom and exotic bacteria - can be lethal.

To see one approaching -- with its slow, wide-legged crawl, belly scraping the ground, and forked tongue darting out of its mouth -- is chilling. It is one of the ugliest creatures I have ever seen and one of the most fascinating. 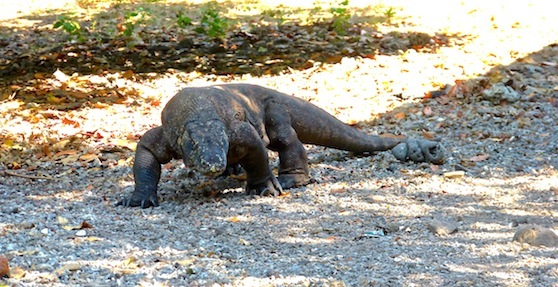 On two hikes in Komodo National Park we saw several, many of them as close as 10 meters. Park rangers lead the hikes and carry large forked staffs to immobilize the dragons by pinning their heads to the ground in case one decides that tourists might taste better than a rodent or bird. Fortunately they only eat once a month or so. I guess that we were wandering by while they were doing the lizard version of dozing on their sofas with a full stomach in front of the TV. I can relate.

The best kayaking was on Satonda Island in the shadow of Mt. Tambora, site of the largest volcanic eruption in recorded history, dwarfing Krakatoa and Mt. St. Helens by orders of magnitude. After the eruption a tsunami swept over the beach and filled in a volcanic caldera about 100 yards from shore, leaving a 2 km wide saltwater lake behind in the caldera. 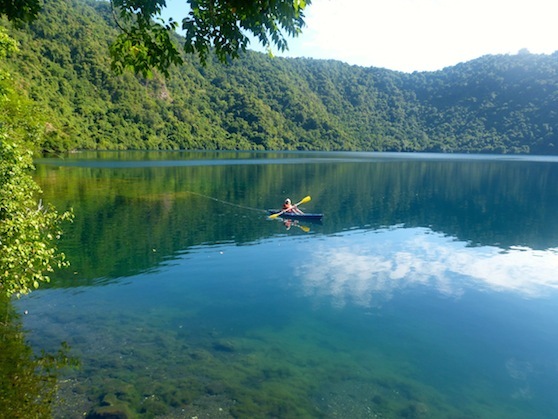 The water is warm and benign - no snakes or flesh-eating fish. I took out a kayak and drifted in silence along the shore and gazed meditatively at the jungle-covered walls of the caldera.

After almost an hour of bliss I headed back across the lake from the other side. About two thirds of the way across my kayak sprung a leak. Soon I was waist deep in water desperately trying to balance, steer and paddle the kayak. I finally gave up and shouted out in one of the biggest understatements of my life, "I think I need some help," a second before the front end of the kayak shot up and dumped me in the water.

I flipped on my back and, with the paddle in one hand and the front handle of the barely floating kayak in the other, started kicking for shore. In less than a minute three swimmers and a guide in another kayak reached me. "Relax," implored the guide. "How much more relaxed could I be?" I thought, floating on my back in a flotation vest in warm water with nothing more lethal than tiny fish to nibble at my toes. My rescuers grabbed the kayak, and I continued to kick my way back to shore.

During the seven day trip we also visited a shipbuilding village, watched orcas dive under our boat, and tracked shooting stars at night on the upper deck. Memorable experiences, all.

But for me the best moment of the trip was snorkeling in the middle of nowhere and slipping from one universe into another, from the colorful world of fish and aquatic plants below to the vast aerosphere of breezes, islands, and dragons above. This may not be the same as traveling through an actual wormhole (if, indeed, they do exist), but it's probably the closest I'll come. All-in-all, it's not a bad approximation.

(For details and more photos, see the Adventure Geezer blog on Don's website.)