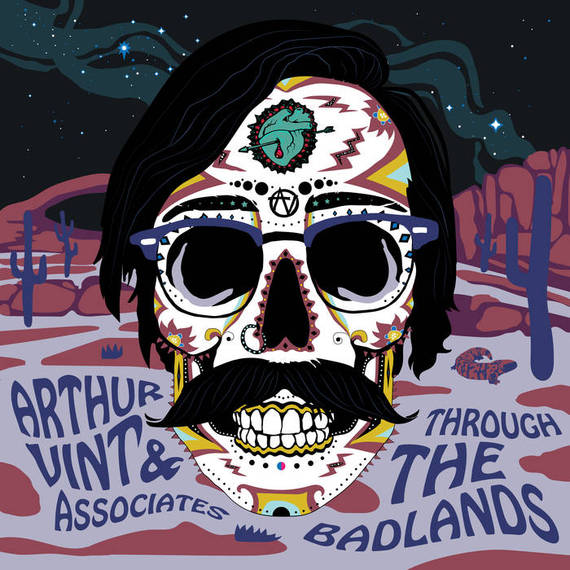 One of the most refreshing, melodic and successfully themed albums that I have heard this year comes from drummer Arthur Vint & Associates on his debut release Through the Badlands. Vint grew up in Tucson, Arizona and his music is influenced with a western vibe that undoubtedly seeped its way indelibly into this man's musical psyche. Moving from Tucson in 2008 he made his way as a sideman in various rock and roll ,jazz, country and orchestral groups, but it as a leader and composer that Vint is finding his unique voice and making some damn fine music in the process. 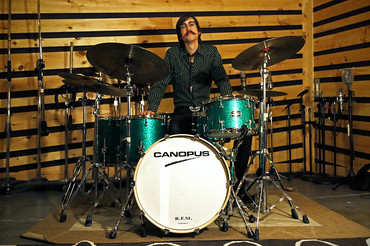 Through the Badlands is a superb musical journey that takes you through Vint's view of the American West; inspired compositions that imbue elements of jazz, country, rock, Native American and jazz music all played with remarkable affinity by Vint's Associates. The Associates Vint has assembled include the ubiquitous Tony Scherr who here plays guitar, pianist and keyboard player Jon Cowherd, Bass clarinetist Andrew Halchak, stalwart tenor sax playert Rich Perry, bassist Ian Stapp and refreshingly new to me , harmonica wizard Yvonnick Prene and violinist Blanca Cecilia Gonzalez. Together they play Vint's music with a passion and oneness of purpose that makes the drummer's western landscape come alive.

The repertoire has a remarkably unified feel. The album is best played in one sitting to get the full effect of taking this very scenic and provocative journey through the West with songs like the cowboy-ish "Through the Badlands," - a song that could easily have been the theme to a Sergio Leone spaghetti western. Jon Cowherd's dancing piano is especially noteworthy here as Vint drives the galloping rhythm onward. Prene's harmonic and Gonzalez's violin mix their sounds to unified perfection.

"Heyoka" is a buoyant affair that swells like a series of cresting waves hitting the shore. Prene's harmonica solo is simply as good as it gets. Cowherd's organ delights with its soft wave of eruptions and Gonzalez's violin lends a pungent sweetness to the mix. Vint shows some tasteful drumming toward the coda that accentuates the climax of this marvelous piece of music.

"Sagebrush" is a slow waltz featuring Rich Perry's mournful saxophone sound in counterpoint to Gonzalez's tart violin. Prene's echoed harmonica prances around the solidly laid rhythm that Vint and Stapp provide like the firmament of a desert outcropping.

"Kindling" uses a driving, syncopated beat that makes you want to get up and do a howl to a war dance. Gonzalez's violin and Halchak's bass clarinet mesh perfectly together. Perry offers a fluid tenor solo that leads to a stirring piano interlude by Cowherd and then an impressive rolling drum solo by Vint.

"Shadow Outlines" is an ensemble jam piece, reminiscent of the music of vintage Allman Brothers, the band grooves in unison and a dirty guitar solo by the great Tony Scherr soars above.

The cadenced traps of Vint on "Devil's Dictionary" features a slinky slide guitar solo by Scherr that wails over the rhythm section.

The album includes two compositions by bassist Stapp, a longtime collaborator of Vint's. The Native American evoking drumming on "Radford" and the waltzing "Maski," which features Scherr's unique sensibilities on guitar and the sonorous tone of Perry on tenor.

Neil Young's "There's A World" is given a driving contemporary treatment including some fine tenor work by the ever creative Perry, tasteful comping by Cowherd and some swinging rhythm section work by Vint and Stapp.

The poignantly played "Blue Prairie" saunters along like a slowly setting sun in the desolate distance. You can see the silhouette of riders on horseback as they move across the golden hued prairie capping off this journey through the American West.

Although this is drummer Vint's date, it is not at all a drum-centric album, Vint is more content to let the music and his assembled musicians work as a whole unified body to create a feel, a time, a place. The approach definitely works, this is some of the most attune ensemble work I 've heard this year. So pull up your Justin boots and strap on your spurs as you prepare to take a ride across the sagebrush. This album is clearly one that is highly recommended for those who love entertaining, expertly played music that straddles the seams between rock, country and jazz.