In the bloody wake of the Mavi Marmara, with its righteous torrent of international outrage, and in view of a new confrontation impending at sea, a point of vital importance has gone missing. It is one that many Jews and many Gentiles grasp, but do not name.

It is the myth of Israeli exceptionalism, and its contradictions go to the heart of the radical disconnect between world opinion - including growing swathes of Jewish and Israeli opinion - and the actions of the war party in Israel and in the United States. Yet most of us still see the conflict through the lens of some exceptionalism, as if through Alice's looking glass.

Exceptionalism is the ideology that holds that one's country is above and beyond any other in the world, more righteous, more holy, and others less so. The late, great, Jewish American historian Howard Zinn wrote an essay in 2005 on "The Myths of American Exceptionalism":

Expanding into another territory, occupying that territory, and dealing harshly with people who resist occupation has been a persistent fact of American history. This was often accompanied from early on with a particular form of American exceptionalism: the idea that [our] expansion is divinely ordained.

Exceptionalism is an ideology propagated by the power elites of two nations of vastly different proportions and histories - Israel and the U.S. - but each declaring a divinely manifest destiny, each justifying a permanent state of exception, each engaging in extrajudicial assassinations and occupations, each with its second-class humanities and "internal enemies."

It is ideas like exceptionalism - and the grim realities of the state of exception - that enable nation-states to defend policies of expansionism, violations of international law, the dispatching of international activists. All the more so for young states with centuries of colonialism etched into the land and consciousness.

Through the looking glass, even for those who still have eyes to see (and who haven't, say, had eyes shot out of their sockets, as did Jewish American art student Emily Henochowicz at a West Bank protest this week), it can be hard to tell myth from fact, ideology from history.

The looking glass of exceptionalism comes in lenses of many colors, many brands:

* For the Israeli apparatchik: The State of Israel, as protector of the Jews and "the only democracy in the Middle East," has an inalienable right to use overwhelming, disproportionate force against its foes. All Jews must stand with it at all times under all circumstances. The genuine rights of the Jews, as a historically oppressed people, become the state's right to [fill in the blank].

* For the anti-Zionist activist: Israel is an exceptionally evil, exceptionally powerful entity, a "barbaric" nation among supposedly "civilized nations." And "Israel," by which many activists equate the people and the state, is facing exceptional payback. Their actions now run the gamut from boycotts to firebombs, which tactics can also fan the flames of anti-Semitism.

* For the anti-Semitic opportunist: The real problem is the "Jewish problem." This exceptionally problematic people must either be liquidated or, as Ann Coulter put it, "perfected." Zionism is a codeword for Judaism, "the Zionists" for "the Jews," much as "the Reds" used to be. Anti-Semitic crimes worldwide have surged since the invasion of Gaza. And what now, with Stars of David burning in the streets?

* For the American pundit-politician: Through the looking glass of American exceptionalism and paternalism, the conflict provides a civilizational rallying point and a spectacle to sell to the public. "America and her ally, Israel, are waiting for your response," writes Sarah Palin in a Facebook note to President Obama, while VP Biden, on Charlie Rose, just wants to know, "So what's the big deal?"

(Witness the conflict's nature as spectacle, as blood and circuses for the masses, in the immediate evaporation of Middle East coverage amid news of Al and Tipper's divorce.)

For the Jewish peacenik, on the other hand, the State of Israel is inherently neither more righteous nor less righteous than other nation-states with a history of colonialism and partition, war and occupation. Yet the weight of Jewish history confers a special responsibility on the Jew, who, of all people, ought to know how uncivilized even the most "civilized" nations can become.

James Baldwin penned the following provocative lines in 1967: "The Negro is really condemning the Jew for having become an American white man - for having become, in effect, a Christian...He is singled out by Negroes not because he acts differently from other white men, but because he doesn't."

A new generation of Jews, as hawk-turned-dove Peter Beinart has observed, is refusing to accept this moral assimilation, for which ideologies of exceptionalism are but a mask. Many of them joined demonstrations this week in New York and Tel-Aviv. More and more refuse to see the conflict through the looking glasses of exceptionalism, through the blinders of extreme nationalism and tribalism.

Our generation and others must now chart a course towards the only safe harbor there is: An end to the blockade. An end to all forms of terror. A port of peace and freedom. A beginning. 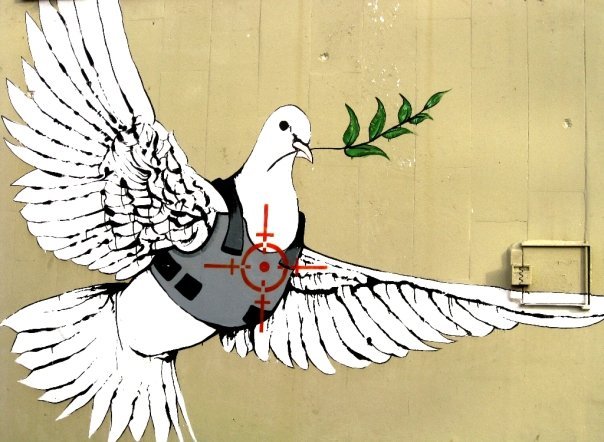