About Through Their Voices serial stories Moaddamiyeh has been an early hotspot for anti-Assad demonstrations and the following government oppression. The town has endured the siege of the Assad regime since the end of 2012, and it is one of towns hit by chemical weapons in August 2013. Despite all the violence these activists believe in the principle of peaceful. And after five years of Syrian revolution their stories and experiences must be heard, their words reflect their struggles and hopes. 10 stories will be told through their voices.

This is part 2 of the Interview "The Dreamer's Voice" with Ammar Ahmad. 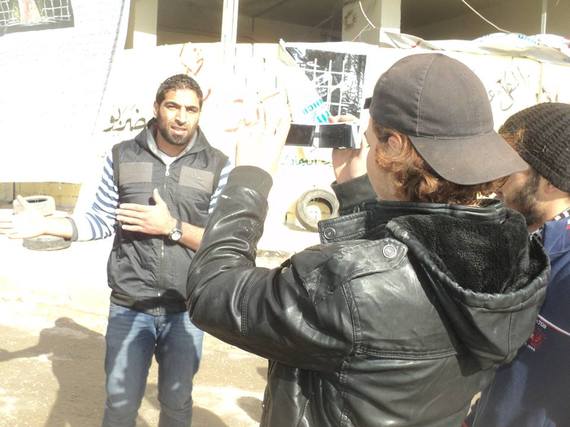 Ammar speaking about the "Free The Detainees"- Campaign in a video recorded to the media. Moaddamiyeh 2016 Photo: Private

Ammar continued telling me the story about his life in the besieged city:

The siege was getting worse and worse in Moaddamiyeh, and 12 civilians starved to death. People in Moaddamiyeh thought things could not become any worse until the day of the chemical attack during which the regime's forces hit the city with chemical missiles. Ammar was awake with his friends at the morning of 21 August 2013 when they heard a strange whistling to then hear people screaming for help. They rushed to the scene and found an unknown white powder covering the street. The regime hit the basements where civilians were forced to do their prayers after they could no longer visit the mosques. It was the time of Fajer, the early Morning Prayer, and the place was crowded.

"I went downstairs and saw the people in a horrific situation, they had spasms, their irises were expanded and the way their bodies were shaking looked terrifying. Their eyes were wide open, but they seemed to be in another world. I tried to carry the person closest to me, and when I started to climb the stairs I felt I'm losing my strength. I was holding the man on my shoulder but we fell down several times. I tried to climb the stairs again, but that's the last thing I remember. I was in a coma for almost 10 days, and after I awoke I had not been able to be fully awake for another month. That is when I learned that we were attacked with chemicals!"

Ammar was one of the casualties most serious affected by the chemical attack that day, Moaddamiyeh losing 82 civilians overall in the so-called the chemical massacre. 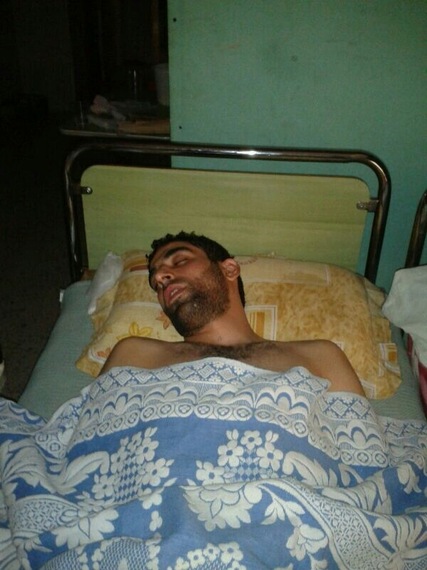 After a period of time, Ammar had fully recovered and immediately went back to support the besieged city and advocate for it. But the situation was getting worse, especially for dozens of children who suffered from malnutrition during to the food blockade and the long strict siege. The regime was working on a shaky truce which stated that the regime had to release all the detainees from Moadamaiyeh, uphold a ceasefire, allow all the employees and students from Moadamiyeh to go back to their work and study, remove all of the regime's forces who had surrounded the city almost since mid-2011, and open all the crossings to the city.

The regime ended up only opening the crossings to the town for a few months; arresting more than 250 civilians who tried to get in and out of the town during that period. Meanwhile, people were allowed to bring in food, but only in specific amounts that were only enough for one or two days.

This tactic ensured that the residents would stay hungry as they still were not able to store food, reminding them that the town's fate and their survival remained in the hands of the regime. One of the regime's conditions for the truce was raising the regime's flag on the highest place inside Moaddamiyeh considered a symbol of victory.

"That day I cried like a little baby! That wasn't what we aimed for! We lost more than 2,500 martyrs and more than 1,500 are still detained. I felt so shattered, but we didn't have any other choice after we were so utterly disappointed of the international efforts."

After a month of desperation, Ammar and his fellows decided that nothing would stop their faith in continuing what they have started in 2011. And, this is really the real accomplishment for the regime, which was defeating their determination. Ammar worked hard to put the United Nations' Damascus office under pressure to help bringing humanitarian aid into Moadamiyeh. He needed to take the risk of going into to the center of Damascus, an area controlled by the regime, in order to negotiate the aids' entering process. In July 2014, he and his fellows finally succeeded in their negotiations.

Time went by with the regime opening and closing the crossings to the city, using the threat of starvation as a weapon. For five months now, the crossings have been closed.

Ammar and his fellows are currently working to help the residents who are living under the regime's siege. The city has almost 45,000 inhabitants--a massive amount of people for these activists to help. Ammar needs to be multitasking; the people can see him everywhere as he tries to help in many areas and always lending a hand when one is needed. 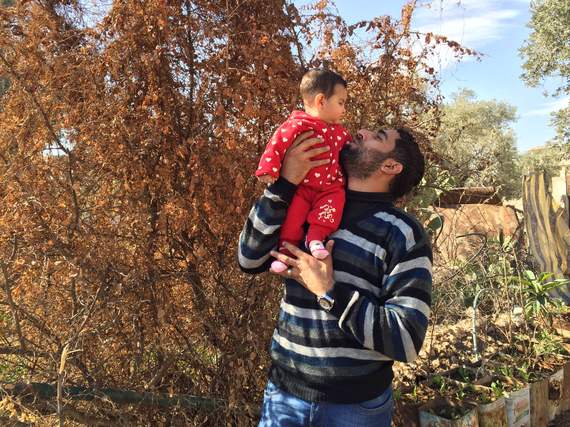 And yet, Moaddamiyeh, along with thirteen other areas, is currently under siege again. After all, people in Moaddamiyeh are planting to defeat the siege. Ammar is now married and he has a beautiful baby girl named Mela. Despite everything he went through life went on. But he is as determined as he had been in 2011, when he told me:

"I dream of a Syria without weapons and without oppression. We are a peaceful people, but we were forced to hold weapons to defend our lives and our families. Weapons were the last choice after almost five decades of Assad reign. It's not like any other place in the world. Dozens were killed in Syria while holding roses and banners in the demonstrations. Weapons were held in Syria to defend the peaceful life we were seeking when we demonstrated against Assad. After all that happened I still believe I might be close to my dreams, maybe closer than I've ever thought."

Ammar finished our conversation adding: "What we need in Syria is to get rid of Assad and when that happens I can assure that nobody is going to see any more weapons. The Syrians hate weapons and once we are done with Assad, they are going back to their colleges, their careers and their normal life, the normal life that they were never able to live under a regime that suspected every three people talking in street to be part of an opposition talking politics. We asked for human rights and they now forced us to ask for humanitarian aids. That was never part of our plans! Syrians need to get what they first asked for."