About Through Their Voices serial stories Moaddamiyeh has been an early hotspot for anti-Assad demonstrations and the following government oppression. The town has endured the siege of the Assad regime since the end of 2012, and it is one of towns hit by chemical weapons in August 2013. Despite all the violence these activists believe in the principle of peaceful. And after five years of Syrian revolution their stories and experiences must be heard, their words reflect their struggles and hopes. 10 stories will be told through their voices. 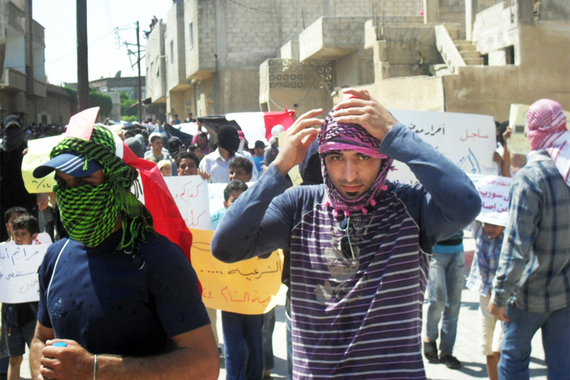 Ammar Ahmad, in one of the demonstrations in Moadamiyeh back in 2011. Moadamiyeh 2011. Photo: Private

Ammar Ahmad is like any other young man in Syria, always waiting for his chance in a country that is essentially controlled by just one family -- by the Assad family and their supporters. That is what Ammar always thought.

Ammar studied at the Flight Institute in Damascus. The law says that all graduates must be hired by the airports or related governmental institutions. Yet, Ammar was not hired and all his job applications were being rejected. He tried every single way to get a job, but it was all in vain. At the same time, most of the graduates from his class were hired in reputable positions simply because of their fathers or other relatives have worked for the regime.

"I was really desperate and hopeless because there was nothing left to do from my side to get that job, and I completely lost hope to find a job in my field of specialization. This is when I decided to do military service, which is the worst nightmare for every young Syrian man. However, in Syria it's not optional. One is forced to do it, and you are not allowed to do a lot of other things before finishing your military service. The life for young Syrian men doesn't start when they are being born, but when they are free and have finished their military service."

Military service in Syria takes two and a half years, which a lot of people in Syria consider as a waste of time.

Ammar always hated the idea of privileged elites who use their power and connections to manage their lives, which left him in a desolate state. In 2009, he finished his military service and opened a computer and mobile service store with his brother. They repaired broken electronic devices and helped people with their computer problems.

One day, a friend of Ammar recommended the novel The Shell, written by Syrian writer Moustafa Khalifa, which is based on a true story. Ammar downloaded the novel from the internet. Khalifa.was trained as a film director in France and was arrested at Damascus airport when he returned from Paris. Between 1982 and 1994 he was detained without trial at various Syrian security prisons, including the infamous Tadmur military prison, a detention center described to be a true nightmare for its Syrians inmates.

Moustafa Khalifa was accused of supporting and being a member the Muslim Brotherhood, even though he was a Christian and had no contact to that group. The novel is dedicated to the severe details of the torture and the crimes committed by Syrian intelligence forces.

"I wasn't able to sleep for 3 days in order to finish reading this novel. I couldn't believe the brutality hidden in Syria. I had mixed feelings and at the same time I was terrified, sad, depressed and shocked! But, the worst part was to figure out why all of that had to happen to Moustafa Khalifa. The real reason for his 12-year-detention was that once in Paris he was having dinner with Syrian friends and an alleged friend of a friend who joined the group. One of them told a joke about Hafiz Al-Assad, the former president (and father of the current president), who was holding the rule in Syria at that time. All that Moustafa Khalifa did was laughing at that joke. The visitor who went back to Damascus must have been an informant to the Assad's regime. This is why Khalifa spent 12 years in darkness! More than ever I felt my heart to be full of hatred for this criminal regime. I heard a lot of stories from my parents, but they weren't as powerful as when I figured it out myself. I mean I always knew how bad the Assad family was, but this level of torture and oppression was more than I've ever imagined."

When the Syrian uprising started to blossom, Ammar was very excited and he felt that 50 years of depression and fear were coming to an end. There used to be a TV show that Ammar was watching which was about life goals. He watched one particular episode which dealt with the possibility of leaving a positive impact in the world, leaving Ammar with dreams about the space he could inhabit if Syria was ruled differently.

"My real life started when I began to dream about getting the chance that I've never had! We started to organize the first demonstration in my hometown Moaddamiyeh, and I was really honored and I'll be always proud that I had the chance to participate in the Syrian Revolution from the very beginning."

Even though demonstrations in 2011 had been utterly peaceful, the regime used gas and electric sticks from the first day. Later on, dozens of people were arrested and the regime's forces began to shoot at demonstrators and committed horrible massacres. In 2012, the armed movement appeared, especially since the regime was doing raids and field executions of hundreds of civilians. 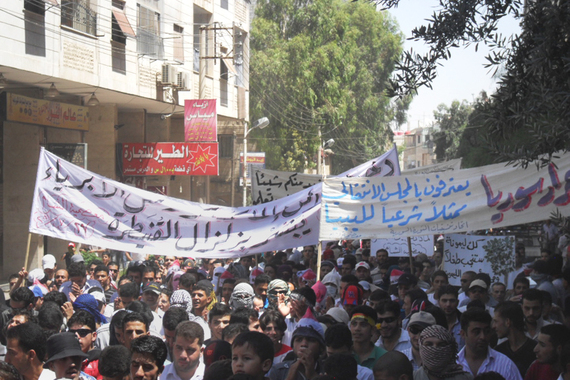 One of the demonstrations were held in Moadamiyeh back in 2011. Moadamiyeh 2011. Photo: Private

"It was tough and tiring. For days and nights, I was not been able to visit my house after my 2 brothers were arrested. I was moving from one place to another escaping from the regime's intelligence. I didn't care and nothing was able to stop me. This revolution was my dream, and I start to see it coming true!"

In 2011, Ammar was sitting on his friend's shoulders for the first time to shout paroles for the other demonstrators to repeat.

"That day the intelligence arrested 48 of us and it was risky, but even when I think about what happened then I think that I would choose to go down the same path again, even if I had the story one hundred times repeated."

Ammar later became a focal point for the international media in Moaddamiyeh where he witnessed two horrible massacres.

During the first massacre, Ammar was hiding a small camera on top of a building, which enabled Al-Jazeera to broadcast live for seven hours what the regime's forces were doing in the city. It was a real risk to do such a thing, and it seemed pointless later. More than 450 civilians were killed, slaughtered and burned.

"I remember being in a very small room with my friend, while the regime's militias were able to enter all the places around us. Through a small hole in the wall were we able to see everything that happened outside. It was horrible and it was the worst thing that I've ever witnessed in my entire life. I saw entire families being executed. They left at 6pm and it was a miracle to have survived that day. We went out to bury the bodies, dozens of them!"

The rebels Free Syrian Army started to grow in the city after it recognized that nothing would prevent the regime from committing more massacres. The Local Council of Moaddamiyeh was established, which is a civil council to support the services for the civilians inside Moaddamiyeh. Ammar managed a huge part of the communication with United Nations offices to bring in humanitarian aids after the city was under Assad's siege. But it seems as if Moaddamiyeh needed to lose a lot more until the United Nations were able to act. To be continued.