About Through Their Voices serial stories:

Moaddamiyeh has been an early hotspot for anti-Assad demonstrations and the following government oppression. The town has endured the siege of the Assad regime since the end of 2012, and it is one of towns hit by chemical weapons in August 2013. Despite all the violence these activists believe in the principle of peaceful. And after five years of Syrian revolution their stories and experiences must be heard, their words reflect their struggles and hopes. 10 stories will be told through their voices. 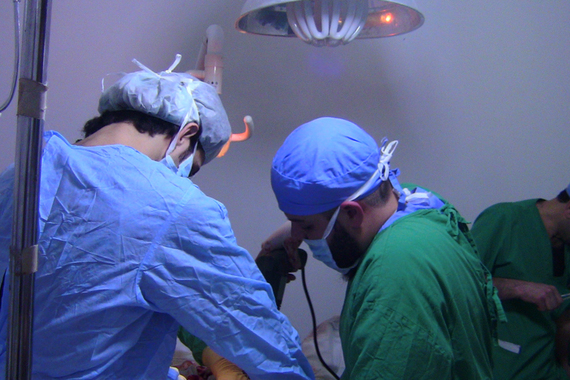 In 2010, Odai Mohammad was a first-year law student at Damascus University ranked at the top of his class. "The walls have ears! Hush!" is what Odai said when I asked him about his political point of view before the Syrian revolution.

When the Syrian revolution started Odai was in his second year, and he was barely able to take his exams when skipping class due to security reasons. The demonstrations started in his hometown of Moaddamiyeh in early 2011. Since then the town has been surrounded by Assad's checkpoints. In early 2012, Odai's father was arrested and spent one week in one of the regime's intelligence facilities. He was severely tortured and needed physical and psychological health care after his release.

"During that time my father encouraged me to study, as he believed it's another way of fighting this regime by being a well-educated person and hopefully a good lawyer one day to defend the oppressed people. My dad was really a simple man, I guess!"

Odai's father was arrested again. That time he had his younger son with him, and the intelligence officer called Odai's family from the father's phone saying "Someone should come and get the kid." But they were terrified and thought it might be a trap to arrest even more people. The father left prison after almost one month. Odai decided to stop attending university in Damascus to limit the threat of being arrested, as he secretely participated in the demonstrations around Moaddamiyeh.

"One day in 2012, we were having dinner and a huge missile hit our house. I remember the heavy explosion, my mom screaming and the huge amount of dust that prevented us from seeing each other. Eventually, everybody was okay, but it was our house and part of our family history was gone that day."

Odai's parents and younger siblings fled Moaddamiyeh and moved to another town in the suburbs of Damascus. Odai refused to leave and stayed in Moaddamiyeh, thinking about ways of how he would be able to help there.

During the regime's raids in Moaddamiyeh in 2012, troops entered the house of Odai's uncle without Odai even noticing it. When he realized that the place was broken in to he saw his cousin lying on the floor with a hammer in his head.

"He was literally in a pool of blood, but he was still breathing. We held him and put him in the car to take him to the field hospital. I was trying to press a towel to his head trying desperately to stop the bleeding. It was all in vain and he had taken his last breath with his head on my shoulder while the regime's snipers were shooting at our car. My clothes were full of blood, and that day I made my decision to volunteer in the field hospital. Whoever did that to my cousin could only be a monster. I refuse to believe it was a human being! They are fighting with brutality and we can only respond with humanity. I only had vague knowledge about first aid work, but the field hospital staff was in desperate need for more volunteers, so they took me in."

The field hospital in Moaddamiyeh was an unequipped basement where the doctors and the volunteers had to work with the simplest materials waiting for ever-more casualties. Odai was a quick learner, so he moved quickly from providing first aid to being an assistant in the operating room.

"Saving people's lives in such circumstances was and still is a miracle! Sometimes we have worked for days nonstop. We had more shelling and more victims. The most critical time for each casualty is during the first 24 hours. I remember that we got many casualties with shrapnel in their heads. Many of those casualties were saved even though nobody thought that they could make it. The doctors did not practice medicine but they worked miracles."

Odai continued to live under the siege of Moaddamiyeh providing help in the field hospital wherever it was needed while his family was living in another area of the Damascus suburbs where he thought they would be safe. But he was mistaken. His father was killed by Assad's shelling on April 1, 2013. Odai didn't have the chance to attend his father's funeral.

"They killed him, but he is one of the many martyrs. Up to this day we have persons from Moaddamiyeh being killed."

Odai seems to remember every story of every single casualty they have received in the field hospital.

"Once, I remember, we got a guy who was totally burned, he didn't have any skin on his body. While he was climbing an electricity tower nearby the regime's area in order to get electricity to our town, which has lacked electricity since mid-2012, he got an electric shock and every inch of his body was burned. He spent 6 months in the field hospital until he was fully recovered. People from all over the town were sending clothes to the hospital, which would then be used as bandages for the casualties. We lack even the simplest medical consumables. But what really breaks my heart is the fact that many of the casualties we saved have then died at the beginning of 2014 when they left the town during the regime's truce to complete their treatment in the regime's areas. This cannot be a coincidence! Many of them left Moaddamiyeh in good condition, despite signs of starvation, the siege, and the poor medical care. But then they died when they allegedly had full medical coverage. We strongly believe that they were killed in the regime's hospitals."

Odai did not leave Moaddamiyeh in the past four years, and he has seen and witnessed too much regarding his young age. Even when the town endured chemical attacks, Odai remained with the field hospital to help.

"I'm not saying I'm the strongest person ever, I still have many weak moments, but I'm always surrounded by my fellows who are there to pull me back up and force me to remain standing. And the same holds true for them. We are always there for each other."

When I spoke with Odai again, he did not seem to know what was going on outside Moaddamiyeh, and he laughed saying that they don't have electricity and that he is busy, constantly having more important things to do than watch the news. 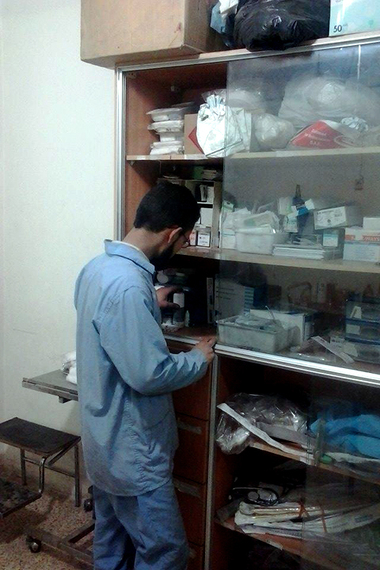 Odai while working at the field hospital in Moaddamiyeh. Moaddamiyeh 2013. Photo: Private

"You can't imagine how hard is it to see a wounded woman with a wounded unborn baby inside of her! The first time I saw blood and needed to clean a wound myself and stitch it I was emotionally shattered. But I have to do it for as long as there are Syrians who demand their dignity and rights, who sacrifice and fight. We, the volunteer medical team, will be here and try to save them and heal their pain!"