About Through Their Voices serial stories:

Moaddamiyeh has been an early hotspot for anti-Assad demonstrations and the following government oppression. The town has endured the siege of the Assad regime since the end of 2012, and it is one of towns hit by chemical weapons in August 2013. Despite all the violence these activists believe in the principle of peaceful. And after five years of Syrian revolution their stories and experiences must be heard, their words reflect their struggles and hopes. 10 stories will be told through their voices.

Adnan Abo Moustafa graduated from the gymnastic institute in 2008. He had chosen this particular course of study because he thought it would be relatively easy to find a job when he is graduated. Then, it seemed he had been mistaken. Dozens of applications to teach at government-run schools failed to yield results. Finally, Adnan was hired at a private school in Douma city in the Eastern part of Damascus Suburbs, where he worked from 2008 till 2011.

Always interested in the news in the Middle East, Adnan followed along with political developments--something his parents didn't really like. 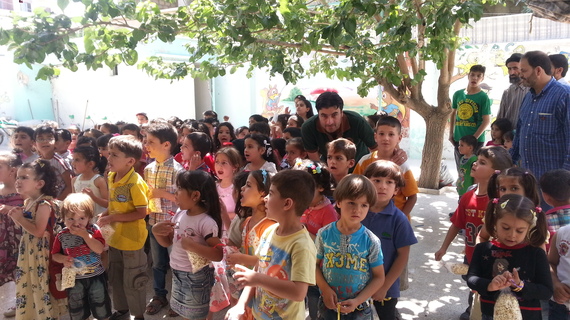 Adnan with the children in the school in Moaddamiyeh 2016. Photo: private

"My parents always wanted me to 'mind my own business,' as they think I need to focus on how to be promoted at work and how to create my own family later on. But, it always looked wrong to go to your work, go back to your house, spend time with your family and never look around. Pretending that what was going on around us in Syria has never existed was very hard for me. All the social justice and freedom of speech that we never had were things which are unignorable. The fear that the people have when they see a policeman or even only a traffic policeman wasn't normal at all. In other countries, people feel safe when the police is around, but for us it's the opposite!

There is something that happened with me that I'll not be able to forget, ever. When I was supposed to do my military service, I went to the competent authority, but when I joined I was three days late. In a country where they respect their citizens and at least deal with them as human beings, you will expect that I might be paying a fee or something, but you will never imagine that I was chained from my feet and my arms and was grabbed with a group of other young people who had the same situation. They kept us for 3 days in a place looks like a prison but it was much worse with criminals and normal prisoners who have committed crimes. That was really humiliating. And till this moment I'll never understand why they needed to do that."

Douma, the city in which the school Adnan was working for was located, was another hotspot for anti-regime demonstration. Therefore, it wasn't really a pleasant for Adnan to pass checkpoints between Moaddamiyeh and Douma, so he left his job in April 2011. Instead, he worked day and night on organizing and preparing demonstrations.

"Things were simple at the beginning. We were using mobile phones to record the demonstrations. Cartoon boards and markers became taboos at that time. Our activism wasn't only in Moaddamiyeh but we used to go daily to participate in other demonstrations, in Damascus and its suburbs-areas like Joubar, Yarmouk, Qatana and Jdaidet Artouz."

When the Assad regime forces started to carry out raids in demonstration areas, Adnan thought that him and his friends should do something about it. Maybe they could send out alerts or updates about Assad's forces' movement in the neighborhoods, he thought. This might help people escape being arrested or killed. Adnan created a Skype chat group and added all the fully trusted activists to this group.

"We were getting a full update for the Assad's forces move in the neighborhood, and tried to warn people about the expected danger. I still remember that one day in 2012: I was in an apartment surrounded by Assad's armed forces and I was watching and following the news and warning the people in the group. I was telling people that I might be arrested any minute. It was just a matter of luck, whether I'll be arrested or killed. For sure that could happen to me if they entered the place. But they didn't! It wasn't a good experience to wait to know whether you are going to live or to die! When the big massacre was committed in Homs, we received dozens of IDPs from Homs and we tried to help them until the regime also started to commit massacres in Moaddamiyeh -where people had thought they could flee, in order to provide safety for their families-but it didn't take long before they had to flee again, from Moaddamiyeh.

In those days, we were not able to bury the bodies because helicopters were shooting at us. Some were kept for the second night, so we can be able to sneak out in the night and bury them totally in silence. Not because of grief, but because of the fear of being killed ourselves by the snipers or the helicopter shots."

Then the siege officially started in Moadamiyeh and many areas in Damascus Suburbs. The people in Moaddamiyeh suffered severely from the siege from March 2013. At that time, they started to witness the deaths of children due to the malnutrition. Adnan and his fellows tried to raise awareness about what was going in Moaddamiyeh through social media platforms and communication with media outlets. 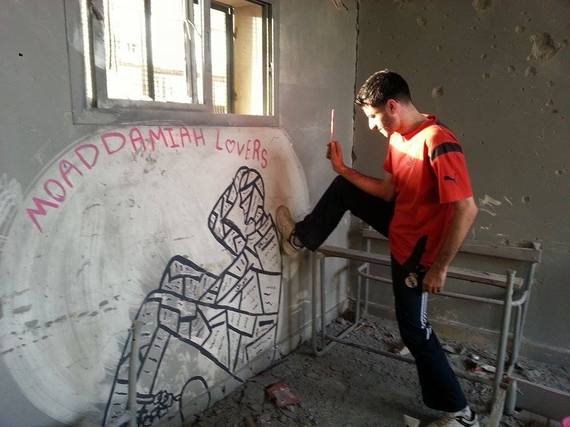 "After a long time of siege, we were forced to accept the regime's truce. Nothing changed for us, but we had nothing else to do to fight the starvation. For us, as activists, nothing changed. We still believe in all the principles that we had and we still have."

Adnan and his fellows established a local organization to support the needs of the people of Moaddamiyeh. Moaddamiyeh's former water source has stopped due to clashes in other areas in Damascus Suburbs. The people there were not in an enviable position, and the water crisis took the suffering to a whole new level. Adnan worked on providing fund to get water out of wells and deliver it to the citizens' houses, in order to provide drinking water for all in Moaddamiyeh.

Moaddamiyeh now is back under siege. Since the beginning of 2016, all the crossings to the city have been closed. Recently, authorities allowed students to go to the universities - but without providing any guarantees for their safety.

"The psychological phase that we are in due to the pressure and the siege is one of the hardest things that we need to go through, but whenever I have a psychological and moral conversation with myself, I just remember my cousins and my younger brother who were killed by the shelling to know that I need to do it. I just need to carry on! When I have a look at their photos and our photos together, I feel hope. A lot of hope, which I need to be planting and spreading around to grow up! So, we are trying to plant hope here, with the wish that it blossoms."

The story was originally published in German on WirMachenDas.jetzt