Muntadhar al-Zeidi is a hero.

Know what Bush was saying when al-Zeidi threw his shoes? "The war is not over. But . . . it is decidedly on its way to being won."

And Muntadhar al-Zeidi lost it. Threw both his shoes, yelling that shoe #1 was " a goodbye kiss from the Iraqi people!" His second shoe was "for the widows and orphans and all those killed in Iraq!"

This was a gift to the entire world. We all owe a debt to this 28-year old journalist who, for one beautiful moment, letting go of all rational calculation of the possible consequences, stood up and spoke truth to power.

He is currently being held by Iraqi security forces and faces an unknown fate. I would not want to be in his shoes right now.

If you are new to Flickr you will have to create an account, but that is free and only takes a moment. 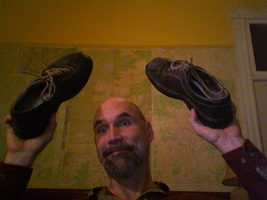