[Heads up for the overly sensitive: I'm going to talk about pee, piss, taking a leak, and other euphemisms for urine and urination. But hey, you all do it.]

Man urinates in reservoir, "ruins" 38M gallons of water.
That was the headline in an article in the news today, except without the "quotes."

On April 16, security cameras recorded some teenage delinquents trespassing around the Mount Tabor Reservoir No. 5 in Portland, Oregon. One of them was seen peeing through the fence. According to the police, the culprits were caught, cited, and released.

The city announced that because of this incident, they would throw away 38 million gallons of potable water and clean the reservoir, at a cost of tens of thousands of dollars, not including the actual value of the water to consumers, which is far higher. The water will go to the sewage plant and undergo the same treatment the city's regular sewage gets. After that, the water gets thrown away again, into the Columbia River. Why? Because of concerns that the water was now "contaminated."

This incident shows, in many ways, why our relationship to, and understanding of, our water system needs to change.

The typical volume of the human bladder is perhaps 600 to 800 milliliters, though people often feel the need to pee when it gets to 150 to 200 ml. Yes, scientists actually studied this. While it is likely this miscreant is simply an immature jerk, perhaps he simply couldn't hold it anymore. For the sake of this calculation, let's assume he had a really full bladder: 600 ml.

Next, if you look at the news pictures of the reservoir (see below), you'll see that it has very sloping sides, so it is highly unlikely that any of this moron's pee actually reached the water: it appears likely it fell on the sides, where it probably evaporated. But, again, to be conservative let's assume it ALL reached the water. 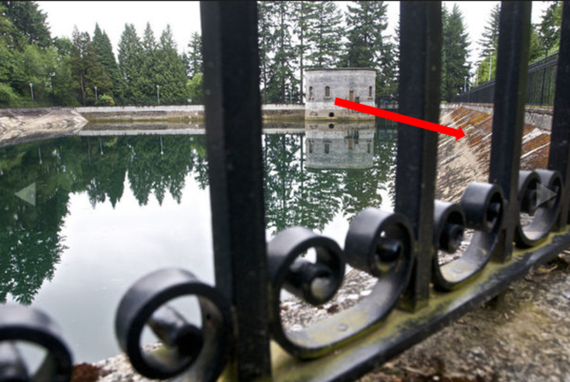 The arrow shows the long sloping side of the reservoir. Photo by Benjamin Brink, bbrink@oregonian.com. Modified by Peter Gleick.

Now, it turns out that urine is 95 percent water. The rest (5 percent of the 600 ml) is dissolved salts (potassium, sodium, chloride), a tiny bit of urea, creatinine, and trace amounts of enzymes, carbohydrates, and hormones (in this case probably elevated levels of juvenile testosterone). So, 30 milliliters of things other than water.

What does this mean? It means that -- at worst -- around 30 milliliters of mostly harmless stuff might have fallen into 38 million gallons (144 billion milliliters) of high-quality potable drinking water: this is 0.2 parts per billion or 200 parts per trillion.

Folks, even if this guy is pissing out pure concentrated evil, rather than some basic minerals and organic chemicals, it's not going to have any effect on the water quality. By the way, this reservoir is open to the air. And birds. And insects. As someone local noted, animals sometimes fall into the reservoir and die without any such action taken.

OK: it's questionable about whether a reservoir holding treated water about to be delivered to consumers should be as open and accessible as this one seems to be. This incident raises valid security concerns. But if the public is worried about water quality -- as we all should be -- our water managers should educate us about and protect us from real risks, like unmonitored and unregulated chemical plants right upstream of our water intakes in West Virginia, rather than pour perfectly good water down the drain because of unwarranted fears.