I write about the Flavr Savr in Genetic Roulette: The Documented Health Risks of Genetically Engineered Foods. Two biotech advocates, Drs. Chassy and Tribe, created a GMO disinformation site that allegedly discredits all 65 health risks highlighted in the work. I have already shown that their attack on the first risk, Dr. Pusztai's potatoes, was based on pure PR spin and scientific sleight-of-hand. Below I respond to their accusations regarding the Flavr Savr.

1. (Chassy and Tribe) FDA records clearly show that experts stated that the process of introducing stomach tubes can damage the rats' stomachs and/or end up placing test material in the lungs. . . The reader is not told that regulators approved the tomato because their concerns had been fully satisfied that the GM tomato was not toxic.

As indicated in Part 1, the actual scientists at the FDA wrote memo after memo declaring that the higher rates of lesions in the GM-fed group could not be explained away, and that they were not fully satisfied by the explanations. The discrepancy between what the political appointees at the agency stated publicly, and the concerns expressed in private memos by the scientific staff, has been clearly documented.

In fact, one memo reveals that during their Flavr Savr review, the FDA was making blatant and possibly illegal exceptions. One person wrote, "It has been made clear to us that this present submission [Flavr Savr] is not a food additive petition and the safety standard is not the food additive safety standard. It is less than that but I am not sure how much less." According to attorney Steven Druker, who is an expert in US food safety law, the FDA's own regulations clearly state that a lower standard should not have been applied in this instance.

2. No real differences were seen between groups of animals in the study. Contrary to Smith's claims, expert pathologists stated that mild gastric erosions were seen at similar levels in both GM and non-GM fed rats.

This is quite a bizarre statement, given that seven female rats had stomach lesions in the first study, compared to none in the other feeding groups. Even the experimenters said that the results suggest a treatment-related effect. I guess if you completely ignore the main rat study in question, which apparently Chassy and Tribe would like us all to do, then you will not see significant differences. But putting blinders on to ignore inconvenient evidence does not prove safety or demonstrate good science.

3a. Rats might have been injured . . . by accidental administration of test material into the lung instead of the stomach.

3b. Gastric lesions can be caused by acidosis brought on by fasting.

Neither of these arguments address why 7 of 20 females fed GM tomatoes had lesions while the controls, reared under the same conditions, did not. Furthermore, since the rats did not fast but ate as much as they wanted, why would they throw in this irrelevant point (if not to obscure the truth)? 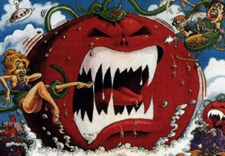 4. Smith is actually asking the reader to believe that the FDA would approve a lethal product.

Believe it! The FDA approves lethal products all the time. According to a report by the United States General Accounting Office, more than half of the drugs approved by the FDA between 1976 and 1985 had severe or fatal side-effects that had not been detected during the agency's review and testing. In other words, after drug companies spent an estimated 12 years and $231 million dollars to research, test, and secure new drug approval through a very hands-on FDA approach, most of the drugs had to be taken off the market or required major label changes due to missed safety issues.

With GMOs, the situation is far more dangerous. The FDA doesn't require a single study, the complex biology of GM crops may produce far more side-effects than drugs, GM foods are fed to the entire population, and they are not labeled or monitored, so symptoms are difficult or impossible to track.

5. There is no evidence of animal deaths. . . . Smith may have confused the words necrosis and dead cells with animal deaths. Careful reading reveals that the regulatory record does not mention any animal deaths which surely would have been of concern had they occurred. . . . This claim (in Pusztai and others 2003) appears to be blatantly untrue.

They would hope it was untrue. But just because they didn't have access to the 44,000 documents made public from the lawsuit does not mean that the deaths did not occur. I can assure you they did, and that Dr. Pusztai, widely recognized as the world's leading expert in his field and author of more than 300 studies, would not mistake dead cells for animal deaths.
In fact, on page 18 of the IRDC Report, it refers to "necroscopy data" on each animal. Necroscopy is an examination of a dead body, not dead cells.

The reason why the FDA scientists did not raise this issue is that they apparently either did not read the endnote, or simply accepted the unsupported conclusion on face value, which said that the necroscopy suggested that the deaths were due to a husbandry error and not test-article related. Even the Calgene scientists didn't raise eyebrows at the finding. It wasn't until a highly experienced animal feeding study expert like Dr. Pusztai reviewed the original papers that this oversight became apparent.

6. Interestingly, eating too many tomatoes can kill rats.

It is odd that Chassy and Tribe first claim that no rats died and then try to argue that if rats did die, tomato overdose could be the culprit. Since all the rats were fed under similar conditions, their killer-tomato argument fails to explain why 7 of 40 GM-fed animals died, compared to only 1 in the other groups.

7. These products are assessed carefully for safety before they are marketed, and—more importantly—there is no scientific reason to believe they pose and (sic) new or different risks.

To claim that there are no new potential health hazards from GMOs is absurd. Fran Sharples, the Director of the Board on Life Sciences at the US National Academy of Sciences (NAS), told me, "The academies have issued numerous reports on assessing the risks of transgenic plants. If the academy believed there were no such potential risks, why would we have delved into these matters in these reports?" One of those NAS reports even acknowledged that the current system of regulating GMOs might not detect "unintended changes in the composition of the food."

The Royal Society of Canada stated that it is "scientifically unjustifiable" to presume that GM foods are safe and that the "default presumption" is that unintended, potentially hazardous side-effects are present. A WHO spokesperson said that current regulations are not adequate to determine the health effects; the Indian Council of Medical Research called for a complete overhaul of existing regulations; and the American Academy of Environmental Medicine called for a moratorium of GM foods altogether.

Since Chassy and Tribe are fond of using the FDA policy as support for their position, I am happy to quote Linda Kahl, an FDA compliance officer, who directly contradicts their ridiculous assertion. In a memo that summarized the position of FDA scientists about GMOs, she stated, "the processes of genetic engineering and traditional breeding are different, and according to the technical experts in the agency, they lead to different risks."

Many of the arguments presented by Chassy and Tribe are easily and completely countered by the evidence. If one were feeling especially generous, one might guess that they simply weren't aware of the strong concerns voiced in quotes by FDA scientists, the incidence of stomach lesions in the first study, or the fact that the rats didn't fast. But these points were contained within the very passage of Genetic Roulette that they were supposedly critiquing. If they actually read the book, which we must assume they did, then they absolutely knew that their counter-arguments were directly contradicted by FDA memos and study reports, and thus were utterly false.

Why then did they construct their website in the first place? It appears that they are not really motivated to make cogent scientific counter-arguments, but instead are hoping that the readers blindly accept their baseless condemnation of Genetic Roulette and never actually read the book.

This tactic is similar to other techniques used by the biotech industry that I describe in Genetic Roulette. GMO advocates, for example, often write up lengthy studies or reports that hardly anyone ever reads in detail. Instead, people generally look at the abstract and/or conclusion and accept the authors' declaration that the findings demonstrate GMO safety. But when an expert actually takes the time to go through the details, he or she discovers that the conclusions are entirely unsupported and unjustified. In some cases, they are in direct opposition to the data.

It took the biotech industry three years to create their so-called academic review of Genetic Roulette. The mere fact that after all that time they could not put together even the most basic scientific arguments is a tribute to the authenticity of the book. If they could have used science to counter it, they would have. But they didn't. They used spin.

It will continue to be my delight to go through each of their pages to expose their "scientific" sleight-of-hand. But I am much more motivated to spend my time taking steps that will end the genetic engineering of the food supply, rather than trying to convince the handful of people who accidentally wander onto Chassy and Tribe's disinformation site. So have patience.

Seeds of Deception: Exposing Industry and Government Lies About the Safety of the Genetically Engineered Foods You're Eating
by Jeffrey M. Smith