Remember the pictures of the fish tomatoes? For years they were an unofficial emblem of the anti-GMO movement. They depicted how anti-freeze genes from an Arctic fish were forced into tomato DNA, allowing the plants to survive frost. Scientists really did create those Frankentomatoes, but they were never put on the market. (Breyers low-fat ice cream, however, does contain anti-freeze proteins from Arctic fish genes, but that's another story.)

The tomato that did make it to market was called the Flavr Savr, engineered for longer shelf life. Fortunately, it was removed from the shelves soon after it was introduced. 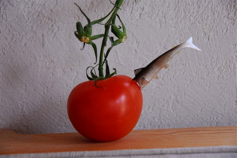 Although there are no longer any genetically modified (GM) tomatoes being sold today, the FDA's shady approval process of the Flavr Savr provides a lesson in food safety—or rather, the lack of it—as far as gene-spliced foods are concerned. We know what really went on during the FDA's voluntary review process of the Flavr Savr in 1993, because a lawsuit forced the release of 44,000 agency memos.

(Those same memos, by the way, also showed that FDA scientists had repeatedly warned their superiors about the serious health risks of genetically modified organisms [GMOs]. They were ignored by the political appointees in charge, who allow GMOs onto the market without any required safety studies.)

Calgene, the tomatoes' creator-in-chief (now a part of Monsanto), voluntarily conducted three 28-day rat feeding studies. Before I share the gory details, I must commend the Calgene scientists who were committed to transparency and full disclosure with the FDA. Unlike all other subsequent voluntary submissions from biotech firms to the agency, Calgene provided detailed feeding study data and full reports. Dr. Belinda Martineau, one of Calgene's tomato makers, writes in First Fruit about their commitment to an open process while they attempted to introduce the world's first GM food crop.

Calgene tested two separate Flavr Savr tomato lines. Both had the same gene inserted into the same type of tomato. The process of insertion and the subsequent cloning of the cells into GM plants can cause lots of unique and unpredicted consequences. The two lines, therefore, were not considered identical.

The rats that ate one of these Flavr Savr varieties probably wished they were in a different test group. Out of 20 female rats, 7 developed stomach lesions—bleeding stomachs. The rats eating the other Flavr Savr, or the natural tomatoes, or no tomatoes at all, had no lesions.

If we humans had such effects in our stomachs, according to Dr. Arpad Pusztai, a top GMO safety and animal feeding expert, it "could lead to life-endangering hemorrhage, particularly in the elderly who use aspirin to prevent thrombosis."

The lab that performed the study for Calgene acknowledged that the results "did suggest a possible treatment related" problem. FDA scientists repeatedly asked Calgene to provide additional data in order to resolve what they regarded as outstanding safety questions. The director of FDA's Office of Special Research Skills wrote that the tomatoes did not demonstrate a "reasonable certainty of no harm," which is the normal standard of safety. The Additives Evaluation Branch agreed that "unresolved questions still remain," and the staff pathologist stated, "In the absence of adequate explanations by Calgene, the issues raised by the Pathology Branch ... remain and leave doubts as to the validity of any scientific conclusion(s) which may be drawn from the studies' findings."

The team that had obtained the formerly secret FDA documents sent the full Flavr Savr studies to Dr. Pusztai for review and comment. While reading them, he happened across an endnote that apparently the FDA scientists either did not see or chose to ignore. The text nonchalantly indicated that 7 of the 40 rats fed the Flavr Savr tomato died within two weeks. The dead rats had eaten the same tomato line as those that developed lesions. In the other groups, fed the other Flavr Savr line, a natural tomato control, or a water control, only one rat had died.

But the endnote summarily dismissed the cause of death as husbandry error, and no additional data or explanation was provided. The dead rats were simply replaced with new ones.

When I discussed this finding with Dr. Pusztai over the phone, he was beside himself. He told me emphatically that in proper studies, you never just dismiss the cause of death with an unsupported footnote. He said that the details of the post mortem analysis must be included in order to rule out possible causes or to raise questions for additional research. Furthermore, you simply never replace test animals once the research begins.

Calgene repeated the rat study. This time, one male rat from the non-GM group of 20, and two females from the GM-fed group of 15, showed stomach lesions. Calgene claimed success. They said that the necrosis (dead tissue) and erosions (inflammation and bleeding) were "incidental" and not tomato-related. The FDA staff pathologist, however, was not convinced. He responded that "the criteria for qualifying a lesion as incidental were not provided." Further, he said that the disparity between the studies "has not been adequately addressed or explained."

In reality, the new study was not actually a "repeat." They used tomatoes from a different batch and used a freeze-dried concentrate rather then the frozen concentrate used in the previous trial. Dr. Martineau explained to me that by freeze-drying, it allowed them to put more of the concentrated tomato into each rat. But Dr. Pusztai said that altering the preparation of the food can lead to different results. He also pointed out that humans were more likely to consume frozen concentrate compared with freeze-dried.

In spite of the outstanding issues, the political appointees at the FDA concluded that the lesions were not related to the GM tomatoes. To be on the safe side, however, Calgene on its own chose not to commercialize the tomato line that was associated with the high rate of stomach lesions and deaths. The other line went onto supermarket shelves in 1994.

This was the very first GM food crop to be consumed in the US. It was arguably the most radical change in our food in all of human history. It was the product of an infant science that was prone to side-effects. Yet it was placed on the market without required labels, warnings, or post-marketing surveillance. One hopes that the FDA would have been exhaustive in their approval process, holding back approvals until all doubts were extinguished. But the agency was officially mandated with promoting biotechnology and bent over backwards to push GMOs onto the market. As a result, their evaluation was woefully inadequate.

Dr. Pusztai also pointed out that the experimental tomatoes were grown at different locations and harvested at different times, which further increases the variability of results.

The FDA's defense that the bleeding stomachs did not come from the Flavr Savr diet was also an exercise in faulty science. They blamed the lesions on mucolytic agents in the tomato (i.e. components that dissolves thick mucus); but according to Dr. Pusztai, tomatoes are not known to contain mucolytic agents. The FDA also claimed that it might be the food restriction in the rats' diet—but the rats ate as much as they wanted. Or maybe it was the animal restraint—but the rats were not restrained.

The explanation that stuck to the wall was that the process of force-feeding the tomatoes through tubes was the reason for the stomach lesions. But as Dr. Pusztai and FDA scientists both observed, there was no adequate explanation as to why the rats fed GM tomatoes in the earlier study had the higher rate of lesions.

Dr. Pusztai said the "study was poorly designed and executed and, most importantly, led to flawed conclusions." He warned, "the claim that these GM tomatoes were as safe as conventional ones is at best premature and, at worst, faulty."

Fortunately, the Flavr Savr tomatoes lacked flavor. They also got mushy (unless they were handled in such a way that the company spent more money getting them to market than it could sell them for). They were taken off the market by the time Monsanto bought Calgene in 1997.

After the Flavr Savr's superficial review and controversial approval, no subsequent GMO producer has ever presented such detailed safety test data to the FDA.