Growing up, my father often spoke of his childhood on American compounds in Libya. In the afternoons after school, he and his friends would get into rock fights with the native kids. Stemming partially in good-natured fun, the throwing of rocks symbolized a release from the mounting tensions between impoverished Libyans and the elite expatriates. Perhaps for good reason, since the Westerners aimed primarily to exploit the vast oil resources of the nation, their domestic maids and drivers in tow. Outside the compound with his family, rocks would smash into their windows and scratch their doors. "We were foreigners, so they didn't like us. And they especially didn't trust our intentions for being there," my father said.

In middle school and high school, my MySpace and then Facebook feeds became increasingly dotted by friends posing with African children, building shelters and relaxing on the beach on the requisite post-work vacation. Surrounded by evangelicals in the southern United States, I watched with scorn as mission trips became a rite of passage for many of my companions. I worried, as many others have, about the negative impact of such trips -- whether these villages would face internal retaliation for working with Westerners, whether their conversion to Christianity was a facade they embraced to receive the aid, and whether such work would disrupt the functionality of their tattered economies. In sum, I spent my teen years floating in a space of vapid hypocrisy, where I felt entitled to denigrate aid work in which I had never participated.

That all changed this summer. A group of friends from college and I are currently located in Amman, Jordan. Since the civil war broke out in Syria in 2011, over four million refugees have fled. As one of the few stable countries in the region, Jordan has been a major recipient of these refugees. My group is currently working on a project in the Zaatari Village -- the nearby camp houses over 80,000 refugees and was recently popularized on the internet when the heat wave became so brutal that an egg could be fried in a pan on the ground.

Our trips to Zaatari begin with minimal procedural variation. Nadine, the Jordanian who houses and feeds us, and who conceived of the project, tells our sponsor to meet us an hour earlier than we actually plan to leave. He usually still arrives late. We buy Pepsi and cigarettes for the trip; fumes billow out the windows as we travel from the picturesque urban jungle of Amman into the small bedouin towns surrounding it. Everyone pretends they aren't nervous as we approach the Syrian border, turning right just a few minutes short of it. Our first day in Zaatari, we meet with the municipality mayor, swallowing down bitter, piping tea and puffing more cigarettes in the curtained room of his office. 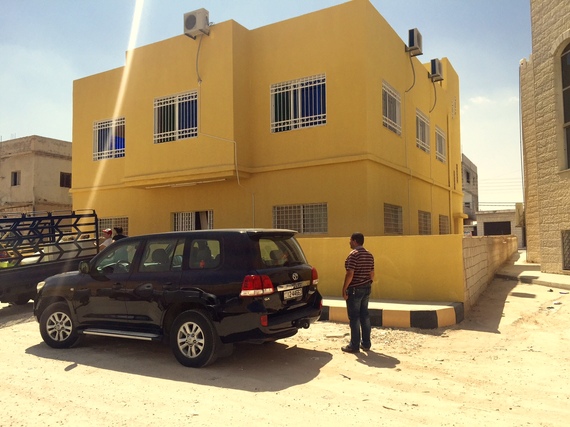 (The building donated to us for our work.)

The World Bank donated a building to the mayor and required it be used solely for women's projects, which is where our work comes in. We've purchased eight sewing machines and two industrial ones, thread and fabric, and are funding workshops into the foreseeable future for both Syrian and Jordanian women to learn to sew. We hope to afford these women a kind of economic independence while fostering ground for unity in the tenuous relationship between the two parties. Jealousy runs high, and according to a fellow volunteer, international NGOs will soon no longer be allowed to work with Syrian refugees in Jordan. After having fitted the room for our project on the first day, and noting the remaining work -- getting the electricity turned on, buying curtains for the windows (a stern requirement from the Mayor, since the room faces a Mosque) -- we loaded back into the car for the few hour trip back to Amman.

Out of nowhere, rocks smashed into our back windows. The sound could be likened to gunshots, if such a comparison didn't downplay the actual violence going on nearby, the recent car bombs in Istanbul and near-daily explosions in Gaza. "Oh, they're just joking around,' Nadine said as we turned to see the children chasing our car, 'they're curious, that's all."

But for me, the incident was overloaded with at-first indiscernible meanings. When my heart stopped pounding, I realized that the most resounding feelings were guilt and shame. Guilt for being an elite foreigner in a third-world country, trying to a help a people whose culture I'm not familiar with and whose language I can't speak a word of. When meetings in the mayor's office become heated, all I can do is twiddle my thumbs and smile, hoping my Ray-Bans and oxfords don't offend anyone. Shame for the all the Facebook posts I scorned, the thought never having crossed my mind that perhaps those pictured might have felt the same internal tumult I was dealing with.

What I know is that at the end of this project, after my requisite post-work vacation in Greece, I'll return home to my Tempurpedic mattress, air-conditioned leather carseats and the safety of the gates surrounding my Ivy League university, but that the 80,000 Syrians displaced in Zaatari will still face days so hot they can fry an egg in a pan on the ground, and nearby impoverished Jordanians will become increasingly jealous of the all the aid being poured into the camp.

What I've come to learn is that we Westerners form an invisible hand of money, ideas and expectations, traveling into these battlegrounds with overeager grins and a keen optimism that our work will have a discernible impact during our short stay in the region. What comes to mind is a tug of war in the mind, pulling in too many directions to count. A perhaps-naive desire to affect real change with all the money and resources surrounding us, an ever-present criticism of the volunteer tourism industry, the underlying realization that the diplomatic actions of our nations are the cause of these conflicts in the first place, and above all, a resounding fear that everything we're doing is useless. All the while we worry about the efficacy of our monies, whether we're spending too much here and too little there and if internal corruption should become a bracket in the excel of our budget. This we argue around hand-scraped wooden tables, twiddling our thumbs and tweeting while domestic maids and assistants pour coffee and serve breakfast. I'm struck by the irony of the similarities between our group, the Americans who came to these countries for oil, and all those Facebook posts I scorned in middle school. All of us hoping to achieve success in projects of our own making, to differentiate ourselves from one another, and in the end, all of us facing similar forms of fear and rejection from the impoverished communities we sought to work with. 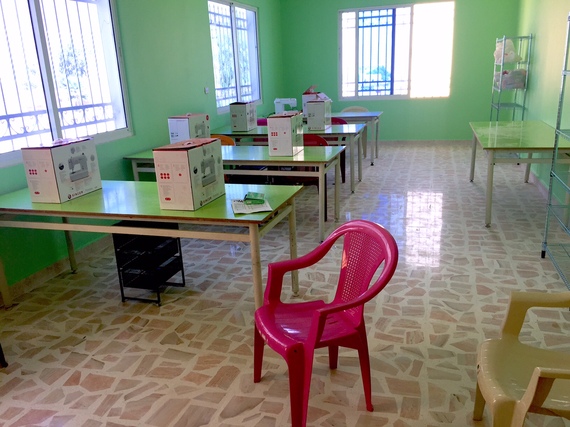 (The room in which the workshops will be held, partially furnished.)

As to the question of impact, at least for my group, results have yet to be seen. While most of the project has gone according to schedule, in our most recent trip to Zaatari, we learned that one of the Jordanian women who will form half of the leadership for the sewing workshop had visited the mayor unbeknownst to us, complaining that we were choosing favorites in our pick of Syrian women. As a result, the project has been put on temporary hold while the mayor distributes fliers into the refugee camp and interviews candidates for the position, all in a show of transparency. If our time here is to have any tangible impact at all, it seems that all our efforts can be uprooted by the personal politics of a few people.