While browsing the card aisle trying to pick out a card for my mother on her special holiday, I began to feel overwhelmed. Most of the cards spouted messages of thanks for always being there, for always showing the right path in life while being an amazing role model. As nice as the inscriptions were, they did not portray the relationship I have with my own mother.

The sentiments seemed more appropriate for the maternal figures portrayed in televisions shows -- the flawless ones that always seem to make the right decisions and can fix everything in under an hour. All of the messaging seemed to sugarcoat the intense, strong but complex love I have for my her. My mother is a lot of things, but she is not flawless. And neither is your mother.

Being my mother's only child has been a blessing and a curse. It has meant that I have been lucky enough to have her all to myself. All of her love, generosity and support. When obstacles began to come down our way, it meant that I was the only person who could love her as only a daughter can.

There have been times when she could not be the mother she wanted to be because of health issues that changed her life and identity. After having multiple heart attacks and strokes by the time I was 14, it changed our mother-daughter dynamic. No longer were we in established roles defined by the laws of nature. Her complications changed every relationship in her life during her early forties. As wife to her suddenly sole bread-winning husband, a daughter to her widowed mother, a friend to those who had no idea how they could help, and a mother to a kid who not only was dealing with the hell attached to the cusp of adolescence, but with a mother who was dealing with rediscovering herself.

Our frustrations with the situation and ourselves erupted on a regular basis. There were times where I would lash out at her for not taking me shopping like other mothers, or not wanting to go to brunch like the other mother-daughter duos I knew. She would loose her patience instantly with me because I would leave my shoes all over the floor, causing her to fall in the middle of the night. I thought she was scrutinizing my every move, but in reality, she was frustrated that she could not navigate around our house as smoothly anymore.

Arguments that may have been minor to most people became major ordeals between us. She has locked me out of the house, kicked me out of the car and not answered my calls. I have said things that make me ashamed, wished things that make my stomach turn and kicked more pieces of furniture that I can count. But since we could not verbalize the hurt and anger of the situation, blowing up was easier. It is easier to make a claim of emotion through blame and anger. Much easier than admitting to fear, sadness and loss.

It was not easy for anyone involved, and to this day, it is a daily struggle to deal with the obstacles of our relationship. Many moments in my life, I wish I could have more conventional relationship with my mother, and other times, I see it in her eyes that she wishes she could give that to me as well. It is a continuing journey of coming to terms, continuing to keep connecting and remembering that we both love each other, despite how frustrated we may be with one another. No matter how many fights we have or flaws we point out to each other, eventually, we continue to keep working on our relationship.

Just because we are mother and daughter does not not mean that a wonderful relationship blooms naturally. It takes work, just like any relationship, and the understanding that people make mistakes. We may not have to put in a lot of work to look similar, but it has taken work from the both for us to be able to spend enjoyable periods of time together without someone leaving in tears.

We will never be the warm and fuzzy mother-daughter duo on those greeting cards. I have reached the point of accepting the reality, and working towards establishing a middle ground. And that is OK with me.

Through the gift of maturity, time and reflection, I have been able to come to terms with the fact that my mother is a human being. A human being who has had a lot of tough life circumstances given to her, some that were not handled as well as she might have wished. I am human being as well, dealing with tough circumstances at a young age that may not always handle each situation with the courage, strength and poise I would like.

But just like my mother has continued to love me and be there as much as she can, I continue to accept the fact that she is human who happens to be my mother, not a super hero who happens to be my mother. It may not be the mother-daughter relationship she envisioned for us when she held me in her arms almost exactly 24 years ago this Wednesday, but it is still the strongest and most intimate bond we will ever have with another human. In my opinion, that is one relationship that is worth the effort.

I ended up choosing a card with puppy on it, telling her that she is a 'top dog' mom. But I think the best gift I can give my mother is an acknowledgment that though she isn't perfect, I know heart is always in the right place. I know I am lucky enough to have a place in that heart for the rest of my life. 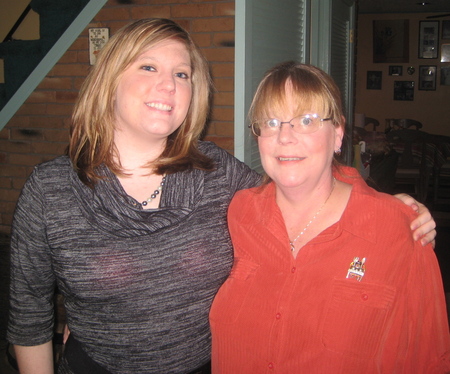