This post originally appeared on the Pure Detroit blog on September 19, 2013.

Some would call it as they saw it — an abandoned park with a mysterious concrete track in disrepair wrapped around the heart of the jungle it had become. Not a far cry from the handfuls of Detroit city parks left to the elements over the years. But Andy Didorosi saw it as a piece of city history and heritage waiting for the right crew of do-it-yourself entrepreneurs to come along and breathe life back into the track.

That’s the story of the Dorais Velodrome at Outer Drive and Mound on Detroit’s northeast side. This historic yet neglected oval race track was originally built by the Wolverine Bicycle Club in 1969. Over the decades, It had seen its fair share of national bike racing championships. But by 1986, the races stopped. The city generously donated it back to nature. The track was left to fend for itself season after season.

But like Detroit itself, there’s always another chapter waiting to be written.

In 2010, Detroit’s version of Hell’s Angels on lawnmowers — the Detroit Mower Gang — rediscovered the neglected track. It inspired Didorosi, whose other automotive venture is founding and operating the Detroit Bus Company.

“We couldn’t let it fall back into the earth,” says Didorosi. “At that point, the city was mowing there once a year to keep it from becoming a jungle, but they weren’t maintaining it.”

Didorosi decided to transform the neglected Dorais Velodrome into the Thunderdrome. A group of about 30 volunteers started cleaning up the track each Wednesday. The grass was cut. Tons of trash was picked up. The parking lot was maintained. New concrete was laid and patched up over particularly rough stretches of track. The neighbors noticed and applauded their efforts, many of them not even knowing it was there. 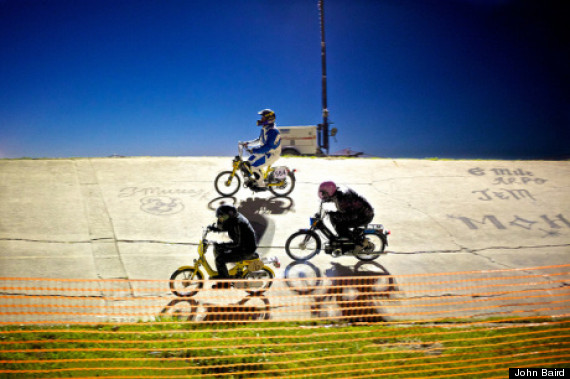 Racers take a turn at the Dorais Velodrome, a neglected race track brought back to life by volunteers. Photo via John Baird.

The next step was to invite the public in to share what Didorosi and his friends had helped bring back to life.

The Thunderdrome became host to a free race-oriented event that caters to gearheads of all kinds. From fixed gear bikes that track was used to and 9 classes of motorized speed demons — think cheap go-karts, mopeds, minibikes and everything in between — the park and the Dorais Velodrome were seeing a resurgence.

The first Thunderdrome event in 2011 saw about 300 spectators and 100 registered racers. By 2012, two events were held including the very first night race at the track. Over 120 racers and 1,850 spectators attended. Didorosi says the energy in the air was palpable.

“We make our own power,” he says. “We bring in these huge generator lights. We basically have to build a whole city every time we have the event. It’s a big production.” 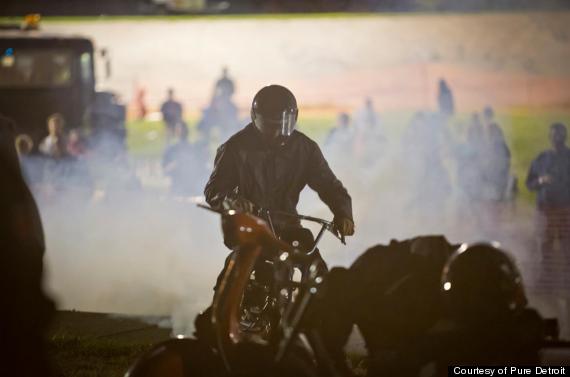 The 2013 incarnation of the Thunderdrome happens this weekend on Saturday, September 21 and Sunday, September 22. To attend both days is $10. The proceeds are going towards maintaining the park and the velodrome as well as towards Camp Casey, a non-profit horseback riding program for children with cancer. Racer registration is closed.

A trio of food trucks including the Mac Shack, El Guapo and Dago Joe’s will be on hand to feed frenzied race fans this weekend as well as a handful of local Michigan craft brewers like Short’s, Milking It Productions, Motor City Brewing Works and Atwater Brewery.

With nearly 2,000 attendees last year, Didorosi is confident that this year’s two-day event will be the biggest one yet. His goal remains to completely repair the track, which would cost about $100,000.

“We don’t think that’s impossible,” says Didorosi. “We’re the Motor City after all, and we’ve only got this one thing. Racing is a Detroit thing. We need to maintain it. We need to make it new.”

Nonprofits Making A Difference In Detroit