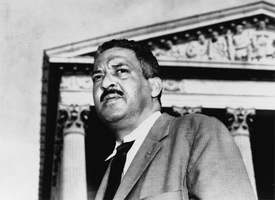 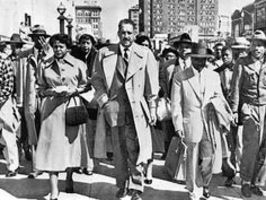 Thurgood Marshall in front of the Supreme Court building (left) and with Autherine Lucy and fellow NAACP attorney Arthur Shore outside Birmingham's Federal Court during Lucy's campaign to desegregate the University of Alabama. February, 1956.

Thurgood Marshall, who was born on this date in 1908, liked telling stories. One of his favorite concerned his days as the head of the legal arm of the National Association for the Advancement of Colored People (NAACP) in the 1930s and 1940s representing black clients facing prosecution in the South. He recalled arriving in town one day only to learn that his client had been lynched that afternoon.

Another story concerned some white tourists who were visiting the US Supreme Court and mistakenly entered an elevator that was reserved for the justices. When they saw Marshall, they mistook him for the elevator operator. "First floor, please," one of them said. "Yowsa, yowsa," Marshall responded, accentuating his southern accent, then pushed the button. When the elevator reached the first floor, he ushered them out, never letting on that he was a member of the Supreme Court.

Throughout his life, Marshall--the chief architect of the legal strategy to dismantle segregation--was forced to endure such indignities, but he channeled his outrage by battling racism.

As the head of the NAACP's legal arm, he worked under repressive conditions with limited budgets. His most important victory was the Supreme Court's Brown v. Board of Education ruling in 1954, which overturned the legality of the long-standing "separate but equal" system of racial segregation governing public education. Marshall's argument in the case relied on the Fourteenth Amendment, which gave freed slaves "equal protection of the laws." As one of his clients recalled, "until Marshall came, [that] law was whatever a white lawyer or white policeman or white judge said it was."

He was already a famous lawyer, and certainly America's most prominent black attorney, when Lyndon B. Johnson appointed him to the Court in 1967.

Marshall grew up in segregated Baltimore, Maryland, where, he recalled, "there wasn't a single department store that would let a Negro in the front door." His mother was an elementary school teacher. His father, who had been a Pullman car waiter, worked as a steward at an exclusive, all-white yacht club. In his spare time, Marshall's father liked to visit Baltimore courtrooms and listen to the cases. He would come home and engage Marshall and his brother in lawyerly arguments. Marshall learned about the US Constitution as a young boy as punishment for being a hell-raiser in school. "Instead of making us copy out stuff on the blackboard after school when we misbehaved, our teacher sent us down into the basement to learn parts of the Constitution," Marshall recalled, "I made my way through every paragraph."

Marshall graduated with honors in 1930 from Lincoln University, where he was an outstanding debater. His classmates included entertainer Cab Calloway and writer Langston Hughes. Marshall wanted to attend the University of Maryland's law school, a few blocks from his home, but it barred blacks. Instead, he went to Howard University Law School in Washington, DC. His mother pawned her wedding and engagement rings to pay the entrance fees, and Marshall commuted each day from Baltimore so he could live at home and save money.

Charles Hamilton Houston, the vice dean, viewed the law school as training "social engineers" who could use the law to challenge segregation. A Harvard Law School graduate, Houston was the first black lawyer to win a case before the US Supreme Court.

Marshall graduated at the top of his class and opened a law office in Baltimore, mostly handling civil rights cases for poor clients. He earned a solid reputation as a skilled lawyer, particularly after winning a case (with Houston's help) before the state court of appeals--Murray v. Maryland in 1936--that challenged the University of Maryland law school's ban on black students. That year, Houston, by then the NAACP's lead attorney, recruited Marshall to join the staff, based in New York. Two years later, at age thirty, Marshall became chief counsel when Houston returned to Howard.

With Houston's help, Marshall recruited a team of brilliant activist lawyers for the NAACP. In contrast to cause lawyers, who defend individuals to advance a progressive cause, like Clarence Darrow and Louis Brandeis, Marshall's team (renamed the NAACP Legal Defense Fund) became the first public interest law firm devoted entirely to identifying cases that would change society, not just help a particular plaintiff. The team was a laboratory for cutting-edge litigation; its long-term goal was to tear down segregation by finding cases that could set precedents in lower courts and eventually reach the Supreme Court.

Before Marshall arrived at the NAACP, its legal strategy was to make "separate but equal" truly equal by fighting to get equal funding for segregated all-black schools. Marshall abandoned that approach in favor of challenging segregation itself. Some local black lawyers who had handled cases for the NAACP resigned in protest, but Marshall would not back down. He handled many of the cases himself, recruited new lawyers, and traveled around the country, especially the South, looking for plaintiffs for future cases.

He was known for his folksy courtroom style, a tactic to disarm his opponents, who often underestimated him.

As an emissary from the NAACP, Marshall was often at risk of physical harm while traveling in the South. While on the road, he usually stayed in private homes because no hotel, restaurant, or public restroom was open to him. He endured repeated death threats. Once, in Columbia, Mississippi, after an all-white jury acquitted his black clients--a rare occurrence--he was nearly lynched, with the help of local police.

Marshall argued 32 cases before the US Supreme Court and won twenty-nine of them. He won his first Supreme Court case, Chambers v. Florida (1940), at the age of thirty-two. Other landmark victories include Smith v. Allwright (1944), which overthrew the South's "whites only" primary system, which white southern politicians used to disenfranchise blacks, and Shelley v. Kraemer (1948), in which the Court declared that restrictive covenants barring blacks from buying or renting homes could not be enforced in state courts.

But Brown was Marshall's crowning achievement at the NAACP. In 1950 Marshall won two Supreme Court cases--Sweatt v. Painter and McLaurin v. Oklahoma State Regents--that challenged segregation in graduate schools. After these victories, he recruited plaintiffs to tackle segregation in public elementary and high schools. He sued school districts in South Carolina, Virginia, Delaware, the District of Columbia, and Kansas on behalf of local parents and students. The cases were consolidated under the Kansas lawsuit, Oliver Brown et al. v. Board of Education of Topeka. One of Marshall's innovations was to file a Brandeis Brief that did not rely solely on legal theory, but also drew on studies by sociologists and psychologists that documented the harmful effects of segregation.

Marshall's opposing lawyer was John W. Davis, former solicitor general and the Democrats' presidential candidate in 1924. Considered the leading appellate lawyer in the country, Davis had argued some 140 cases before the Supreme Court. While in law school, Marshall would sometimes cut classes to watch Davis argue before the Court.

After Marshall and Davis made their arguments in 1952, the court was divided. It was only after a second round of arguments in 1954--after Earl Warren was appointed chief justice--that the court ruled unanimously to overturn segregation in public schools. The ruling marked a turning point in American history and lifted Marshall's national profile.

Some civil rights activists disparaged the NAACP's legal approach to dismantling segregation, contending that civil disobedience was a more effective tool to change public opinion and pressure politicians and businesses to change their practices. But when they needed attorneys, it was the NAACP they turned to. Marshall's clients included the activists who staged lunch counter sit-ins and integrated southern buses in freedom rides.

In 1961 President John F. Kennedy named Marshall to the federal appeals court. Southern senators held up the appointment for almost a year, challenging his legal credentials but obviously opposed to him because he was black and a civil rights pioneer. None of the 112 opinions he wrote on that court was overturned on appeal. Several of his dissenting opinions were eventually adopted as majority opinions by the Supreme Court.

After President Johnson appointed Marshall to the Supreme Court in 1967, he joined a strong liberal majority and advanced bold ideas expanding civil rights and free speech. In Amalgamated Food Employees Union v. Logan Valley Plaza (1968), Marshall's majority opinion ruled that a shopping center was a "public forum" and could not exclude picketers. His majority opinion in Stanley v. Georgia (1969) held that the possession of pornography in the privacy of one's home could not be subject to prosecution. In Bounds v. Smith (1977) he wrote the majority opinion ruling that state prisons must provide inmates with "adequate law libraries or adequate assistance from persons trained in the law."

As his liberal colleagues left the court, to be replaced by four conservative justices appointed by Richard Nixon, the court's center of gravity shifted, and Marshall became well-known for his articulate dissenting opinions. One of his best known was in a 1973 case, San Antonio School District v. Rodriguez, in which the court ruled by a 5-4 vote that Texas's system of funding public schools through property taxes--which meant that wealthy communities spent much more than poor ones--did not violate the Constitution's equal protection mandate. In his dissent, Marshall argued that the system "deprives children in their earliest years of the chance to reach their full potential as citizens" by denying them an equally funded public education.

Like his closest ally, Justice William J. Brennan Jr., Marshall believed that the death penalty was unconstitutional under all circumstances. During a death penalty argument in 1981, Justice William Rehnquist said that the prisoner's repeated appeals had cost the taxpayers too much money. Marshall interrupted, saying, "It would have been cheaper to shoot him right after he was arrested, wouldn't it?"

In his final term, Marshall dissented in 25 of 112 cases. He became increasingly frustrated by the country's failure to carry out the provisions of the landmark rulings intended not only to dismantle legal segregation but also to bring about more racial and social equality. The angrier he got, the more he vented his frustrations in public, sometimes causing controversy, highly unusual for a Supreme Court Justice. "I wouldn't do the job of dogcatcher for Ronald Reagan," he said in a 1989 interview.

Marshall had hoped to wait to retire until a Democrat was elected president and could replace him. But when his health deteriorated, he retired in 1991 after twenty-four years on the Supreme Court. President George H. W. Bush appointed Clarence Thomas--Marshall's polar opposite on everything except skin color--to replace him. Marshall died in 1993.

In 2010 President Barack Obama appointed one of Marshall's former law clerks, Elena Kagan, to the Supreme Court. During the confirmation process, conservative Republican senators sought to discredit Kagan by disparaging her mentor, Marshall. On the first day of her confirmation hearings, Marshall's name came up thirty-five times. Senator Jeff Sessions of Alabama, the ranking Republican on the Judiciary Committee, criticized Marshall as a "liberal activist judge." Senate Minority Whip Jon Kyl of Arizona attacked Marshall for his "determination to protect the underdog." Marshall would have worn those attacks as a badge of honor.

Peter Dreier is the E.P. Clapp Distinguished Professor of Politics and chair of the Urban & Environmental Policy Department at Occidental College. His most recent book is The 100 Greatest Americans of the 20th Century: A Social Justice Hall of Fame, published by Nation Books.