How young is too young?

That's the question being batted around in reference to Thylane Loubry Blondeau, the 10-year-old model whose suggestive photo spreads have ignited a debate over the sexualization of young girls.

"Good Morning America" took a look at some of Blondeau's recent photo spreads for Vogue Paris, which feature the young girl in lipstick, high heels and tight dresses, and a slew of smoldering "come hither" stares.

Although Blondeau, the daughter of soccer player Patrick Blondeau and reporter-turned-fashion designer Véronika Loubry, appeared in the Vogue Paris shoot with other young models, her looks were more mature and for many readers, more discomforting.

A little research shows that little Blondeau has been at this for a while, frequently photographed for editorials (Fashionista has several here), the cover of Vogue Enfants (see pic below) and even walking in Jean Paul Gaultier's Spring 2006 runway show as a child extra.

Reactions to the recent, jarringly-adult editorial have ranged from perplexed to utterly appalled, with most questioning the appropriateness of a child consistently photographed like an adult and sexualized in the process.

But there are those voices who have defended the photos, such as the blogger behind "F**k Yeah Thylane Loubry Blondeau" (which has been renamed simply "Thylane Léna-Rose Blondeau.")

On the site, the blogger argues that the mini model looks "stunning", saying, "I just wished that some people would see the beauty in them too" and "stop having such a judgemental attitude."

However most critics are saying that with the appearance of an arguably-sexy 10-year-old model, the line has been drawn. And as "Good morning America" reminds us, thirteen-year-old Elle Fanning for Marc by Marc Jacobs and fourteen-year-old Hailee Steinfeld for Miu Miu raised a few eyebrows. 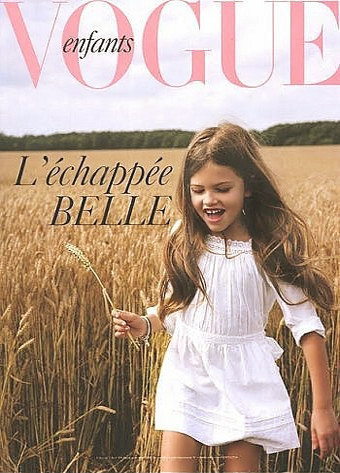