For those of you who don't know me, long story short I was misdiagnosed for several years. In July 2012, I was diagnosed with metastatic thyroid cancer, hypothyroidism, and Hashimoto's disease. After being told I needed surgery immediately, I had surgery to remove my entire thyroid because it was cancerous, as were many lymph nodes. When I woke up from surgery my neck surgeon told me I have what's called "hypoparathyroidism," and that I have to be on three calcium supplements for the rest of my life because my parathyroid glands were damaged during surgery. Two of the tumors that were on my parathyroid glands had to be removed which caused damage.

For the rest of my life I have to be on three different types of calcium medications in order to keep my levels "stable." The first one is called Calcitriol, which I take nightly. The second one is a calcium chewable I take two times a day, and the third is an over-the-counter medication called Tums, which I have to take two times a day as well. Since the diagnosis, I have been on a routine. An example of my day is waking up taking my thyroid medications. Then I have to wait four hours to take half of my calcium supplements. I can't take all of them at once because then I can become very sick, which I didn't know when I was newly diagnosed. So I have to spread out the calcium. I am also on countless other medications for other health issues I have developed. I spread them out during the day. It gets to be so overwhelming. Many days, I don't even want to take all of these medications, but in order to stay alive I have no choice. I am on 22 medications at this time. It's so hard to keep up that I have a list that I check off if I took the medication, which helps. Not to mention the financial burden that has been taking a toll on me because medications are so expensive.

It has been 2.5 years since my cancer diagnosis. In December 2014, I had another unexpected trip to the emergency room, this time for a different reason. I had been experiencing severe numbness and tingling all over my body (lips, hands, feet, and tongue), non-epileptic seizures, and my entire body at one point even went numb. I delayed treatment right away because I thought the symptoms would just go away on its own. Finally after two days, I decided to go to the hospital but my symptoms had become so severe, I ended up going by ambulance. I was pretty much out of it. I don't really remember getting from point A to B. I felt like someone was strangling me. All I remember is I couldn't breathe and I was gasping for air. This was by far the scariest experience of my life.

My boyfriend and family told me to go to the emergency room immediately but I hesitated because I am tired of going to the hospital. Once there, the hospital gave me calcium through IV immediately, just to be safe. The hospital also checked my calcium levels. Receiving calcium through IV put it directly into my bloodstream. Labs came back confirming my calcium was pretty low (7.2) usually my levels are around 9.0. I don't know why my calcium dropped tremendously since I have been on the same routine since my diagnosis and never missed a dose. I ended up needing two IVs at once. I had to stay at the hospital for six hours in order for the calcium to go into my bloodstream. I never thought this was ever going to happen to me. Now, I am aware of hypoparathyroidism symptoms. I am now aware of all the symptoms -- and there are a lot.

Hypoparathyroidism is characterized by weakness, muscle cramps; abnormal sensations such as tingling; burning and numbness (paresthesias) of the hands; excessive nervousness; loss of memory, impaired judgment and brain fog; headaches and uncontrollable cramping muscle movements of the wrists and feet. Other symptoms may be spasms of the facial muscles (Chvostek Sign); the contraction of muscles produced by mild compression of nerves (Trousseaus Sign); malformations of the teeth, including enamel and roots of the teeth; and malformed fingernails. In some hypoparathyroid conditions, there may also be pernicious anemia; dry and coarse skin; patchy hair loss (alopecia); thin, scant eyebrows; patches of skin that have lost pigment (vitiligo); and mental depression. Taken from (www.hypopara.org)

Not many are aware that the Hypoparathyroidism Association is out there. They have a great resources that you really should look into if you have had thyroid surgery and are experiencing symptoms like these.

1: Request a Free Emergency Resource kit. Kit includes: a medical alert bracelet, a keychain tag and a wallet ID. This way doctors will know in case of a Hypocalcemic crash. https://hypoparathyroidism.com/emergency-resources-kit

The reason why I highly recommend having this kit is for having this bracelet. I wear this bracelet daily and I was lucky enough to be wearing this while I was pretty much unconscious during the calcium crash. After exiting the ambulance the first thing the hospital looked at was my bracelet. The nurse at the hospital told me that they loved the fact that I was wearing it so I would get the proper attention immediately. 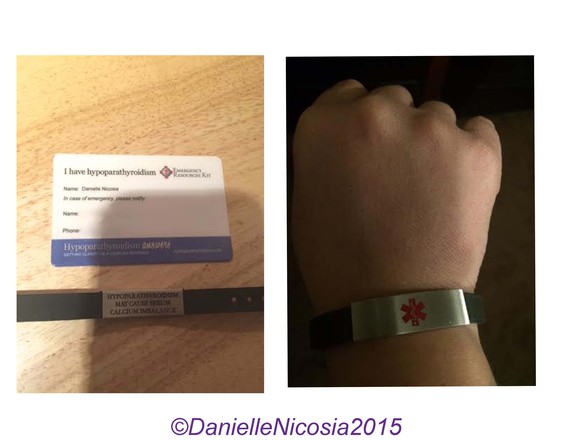 2: Did you know FDA just approved a new treatment, which is the first FDA-approved parathyroid hormone for hypoparathyroidism to control low blood calcium. For more information go to https://www.hypopara.org/article/FDA-approves-Natpara.html.

Lastly, please visit the Hypoparathyroidism Association at www.Hypopara.org for more information. Hypoparathyroidism is such an informative website. Please know the signs and take action right away if you experience any of these symptoms. This is something you don't want to mess with.