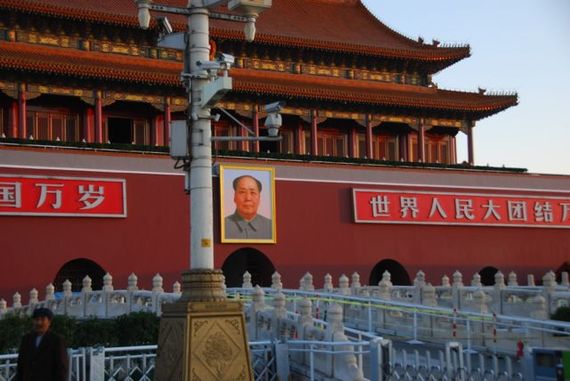 Twenty-five years ago -- June 4, 1989 -- China's People's Liberation Army gunned down thousands of defenseless civilians gathered for peaceful protest in Beijing's Tiananmen Square. Heading the advice of conflicted China experts, including Henry Kissinger and other "friends of China," the Bush 1.0 administration essentially looked the other way. With bodies of their kids barely cleared from the square, the Boys from Beijing launched a massive censorship and disinformation program to scrub the affair from history and repaint China as a friendly and progressive state open for business. The success of this propaganda campaign would have impressed Herr Gobbles.

Wiping the blood from their hands, America's "friends of China," quickly pushed the Clinton and Bush 2.0 White Houses to reward the Communist regime with profitable new trade privileges. An arrogant and unrepentant China hungrily received the gifts of permanent Most Favored Nation status (MFN or "normal" trade relations) and membership in the World Trade Organization. While these deals and many other concessions were cloaked in a promise of "opening up" China to reform, the reality was that they disproportionately enriched the Chinese leadership and the American "friends of China" at great cost to American workers and small manufacturers. Far worse, these blatantly self-serving acts constituted a tacit endorsement of Chinese totalitarianism by some of America's most influential political, business and academic leaders. The result has been a unique double standard, which permits China to engage in scurrilous behaviors that would surely bring American wrath down upon any other nation.

Not surprisingly, China did not "open up." The regime continued the behavior for which it had been rewarded. It cracked down further on political and religious dissidents, aggressively expanded its military and jealously protected its markets. Democracy advocates, Tibetans and practitioners of Falun Gong are systematically exploited, confined, jailed, tortured, executed and sometimes used as involuntary organ donors. China intimidates neighboring Japan, Vietnam, Korea and the Philippines through expansionist territorial claims using a militant fishing fleet backed by a rapidly modernizing navy. It's abusive trade and currency policies have gutted America's industrial base, exporting iPhones and inequality to America. While it is depressing that Americans are willing to trade their principles and allies for cheap consumer goods, it's horrifying to see them sell our children's futures for short-term investment gains.

Last year, Jack Ma, the chair of China's Alibaba group described the Chinese dictatorship as "terrific," denied censorship was a problem, and awkwardly implied that Deng Xiaoping's decision to commit mass murder in Tiananmen was a "cruel" but "correct" decision. America quickly responded with a plan to make Jack Ma one of the world's wealthiest men and his firm is expected to attract as much as $40billion in a massive U.S. public offering. The Alibaba sham is the latest in a series of U.S. backed self-assaults on America which include the 2005 IPO for Baidu, China's Google clone and the 2011 IPO for Ren Ren, China's Facebook knockoff.

The first level of irony here is that while U.S. banks and investors salivate to fund Chinese competitors that steal their ideas from innovative American developers, China either cripples or bans U.S. Internet services outright. Facebook, Twitter and the like are conveniently illegal in Xi Jinping's police state. Yahoo was famously compelled to turn informer on human rights activists and Google was forced to flee to Hong Kong in order to avoid the same fate. Americans dependent on Google's amazingly fast results would be stunned to see how it lags and sputters along under China's biased network traffic prioritization. For the Tiananmen anniversary China stepped up its game to a complete block on Google. Meanwhile China's domestic champion, Baidu zips along at light speed. Worse, the People's Liberation Army cyber-espionage team stole Google's source code and likely handed it over to their Chinese competitors. To help China's master thief get the most of it's stolen American property, Goldman Sachs, First Boston and Piper Jaffray helped Baidu raise over $100million.

A second level of irony comes from understanding that Alibaba's primary business, one of China's truly innovative and well executed websites, is an online marketplace that connects American brands, distributors and retailers with low cost, mostly Chinese manufacturers. Many of these firms are outright counterfeiters of U.S. designs. (Amusingly the tale of Alibaba itself is a counterfeit, having been added to The Thousand and One Nights by a French translator in the 18th century.) No other single firm in history has inflicted as much damage to U.S. manufacturers as Alibaba has.

The apologist of globalism-sans-strategy long ago prophesized that the death of U.S. manufacturing was inevitable, and that America would non-the-less prosper as a high-tech, Internet based economy. A look at the empirical reality over the last two decades clearly shows that manufacturing focused economies like Germany and South Korea have created vast wealth, while "new economy" America peers over the peak of a perilous mountain of public and private debt. It is hard to imagine how any nation could have defended its own business interests more ineptly while simultaneously empowering a foreign state hostile to its principles.

Greg Autry is the author of Death by China and serves on the board of the American Jobs Alliance and as Senior Economist with the Coalition for a Prosperous America. You can find him on Facebook.