Some call it the "Tiananmen Square Massacre," others say the "Tiananmen Square Crackdown," and in China it is known merely as an "incident," the "June 4th Incident," or as the Chinese say, "liù-sì shìjiàn" (六四事件). No matter how you refer to the 1989 democracy protests in Beijing and the brutal response by China's military, on Thursday, June 4th, the world marks the event's 20th anniversary. Check back here for updates on the anniversary -- news, blogs, photos and videos from all over the world.

For a time line of the events leading up to the events that shocked the world, check out this slideshow.

Here's the best of the Tiananmen-anniversary-related news from around the world:

Hong Kong Remembers Tiananmen While June 4th passed in Beijing quietly, it was a different story in Hong Kong, the China-ruled independent territory not subject to the mainland's controls of information and news. TIME reports that 100,000 people in Hong Kong showed up for a massive candle-lit vigil Thursday evening in the city. Emily Rauhala writes:

Remembering Tiananmen Square is a task Hong Kong people take seriously. This is the only Chinese city where the incident is openly discussed and publicly remembered. In the summer of 1989, one million people took to the city's streets in support of the students. They've honored them every year since. But "remembrance" is an amorphous term, especially here. The solemnity of recollection is tempered by anger and fear -- anger that China has not acknowledged the incident, and fear that heavy-handed suppression is not a thing of the past. "What happened 20 years ago could happen again," said Zoe Yiu, a 20-year-old student attending the vigil for the second time. "And now we worry that it could happen here, too." 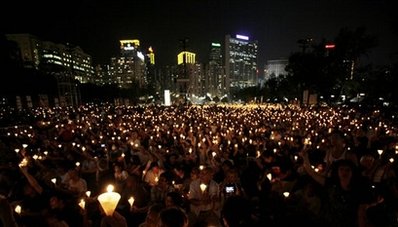 China fires back at Clinton Chinese official spokesman Qin Gang fired back at Hillary Clinton, who had tough words for the Chinese government earlier in the day. Clinton said in a statement that Beijing should account for those "killed, detained or missing" in the Tiananmen crackdown. Qin replied in a statement of his own:

The U.S. remarks, which disregard the facts, make groundless accusations against the Chinese government. We express strong dissatisfaction to that. We urge the U.S. to put aside its political prejudices and correct its mistakes so as to refrain from undermining bilateral relations.

20th anniversary a security success for China Sharon LaFraniere does a roundup of the day at Tiananmen Square for the New York Times and describes a quiet day in Beijing. Reportedly, the number of police in and around the square made any sort of protest impossible. La Franiere writes:

A few pursued television cameramen with opened umbrellas trying to block their shots -- a comical dance that was broadcast on CNN and BBC. There was no flicker of protest. Other than the intense police presence and the government's blockage of some popular Internet services, the scorchingly hot day passed like any other in the capital.

Almost everything fell within its scope: campaigns against corruption, nepotism, inflation, police brutality, bureaucracy, official privilege, media censorship, human rights abuses, cramped student dormitories and the smothering of democratic urges. But to say the demonstrations were to "demand democracy" is an oversimplification.

China reopened Tiananmen Square to the public this morning after ringing the area with metal fences overnight to stop people from commemorating the 20th anniversary of the army's 1989 crackdown on pro-democracy demonstrators.

Uniformed and plainclothes police patrolled the square, the world's largest public piazza, assisted by security guards and cadres from local neighborhood-watch committees. Men with cropped hair were stationed every few paces, some wearing red lapel pins of the national flag. Visitors were forced to pass bags and cameras through X-ray machines.

The Scene on the square CNN's Jaime FlorCruz reports from Tiananmen Square that while people are beginning to fill the square, there are no threats of protests or demonstrations:

Hillary Clinton speaks out on Tiananmen Secretary of State Clinton had harsh words for the Chinese government on the 20th anniversary of the Tiananmen Square crackdown. In a statement issued Wednesday, Clinton said:

Violent suppression of demonstrations in Tiananmen Square by Chinese authorities should be a time for reflection on the loss of hundreds of innocent lives and the meaning of events that preceded that fateful day.

A China that has made enormous progress economically, and that is emerging to take its rightful place in global leadership, should examine openly the darker events of its past and provide a public accounting of those killed, detained or missing, both to learn and to heal...

China can honor the memory of that day by moving to give the rule of law, protection of internationally recognized human rights, and democratic development the same priority as it has given to economic reform.

Security was extremely tight on Tiananmen Square early Thursday, as police officers searched bags and even the pockets of Chinese tourists walking onto the giant plaza.

Foreign journalists were barred from entering, and an AFP TV journalist was ordered by police to delete footage from his camera.

Chinese tourists near the square were reluctant to discuss the events of 20 years ago.

Former student leader in WSJ: "Prosperity can't erase Tiananmen" Former student leader at Tiananmen Square and current Chinese exile Wu'er Kaixi took to the pages of the Wall Street Journal to criticize the Chinese government for its failure to learn from the Tiananmen incident. The Uyghur believes that China's prosperity has stripped China of the activist passion that punctuated its 1989 democracy movement. Kaixi writes:

In short, 20 years on, I believe the protests in 1989 were a kind of tragic success. China got its Nikes and discos. Unfortunately, China did not get the other change we yearned for -- political reform. For many years, I have been of the opinion that a deal was struck with the people of China. The deal was economic prosperity in exchange for political quiescence and continued and unchallenged one-party rule. For years, I have been describing it as a "lousy deal." But today, on the anniversary of the bloodshed that ended the protests, I would like to add that it is also an illusory deal.

CNN reporter harassed by men with umbrellas at Tiananmen In this video, plainclothes Chinese officials block CNN's cameras from filming reporter John Vause at Tiananmen Square on Wednesday... with umbrellas. This video illustrates the extent to which the Chinese government is trying to prevent coverage of the anniversary.

Twenty years after the June 4 Tiananmen incident, public discussion about what happened that day is almost nonexistent in mainstream society on the Chinese mainland.

It's still a sensitive topic. Scholars, officials and businessmen declined interviews with the Global Times on the subject. And searches for "June 4 incident" on the Chinese versions of Google, Baidu and Yahoo were blocked.

Chinese Using Twitter to spread the word on Tiananmen Fox News has a great story about how social networking sites like Facebook and Twitter are being used within mainland China to spread information on the Tiananmen Square Massacre. The Chinese government blocks the flow of information on the "June 4th Incident," as it is known in China, and many Chinese youth are unaware of the historic event. Carolynne Wheeler writes on Fox:

Frequent Twittering and Facebooking from Chinese users on the eve of the June 4 anniversary proved there are many ways around the censors' efforts.

One Twitterer, identified as freemoren, posted regular updates of what was happening exactly 20 years ago on the square; others shared links to Western documentaries and newspaper articles about the Tiananmen massacre; some even speculated about how many packages Tank Man held in his hands as he faced down the tanks.

A view from the Square on the eve of the anniversary Reuters' Ben Blanchard offers a detailed description of what it was like today in Beijing's Tiananmen Square. He predicts that the day will pass "peacefully" and describes the abundant supply of Chinese military officers manning the square to make sure it does. Blanchard writes:

In a sign of Beijing's mix of confidence and caution, Tiananmen Square was open to visitors early on Thursday, but with hundreds of police and guards present. On the 10th anniversary of the crackdown in 1999, the square was closed to the public.

Chinese crowded the square to watch the dawn flag-raising ceremony that is now a fixture of official patriotic ritual. Many were visitors from outside Beijing and appeared oblivious to the sensitive date. There were no gestures of protest.

Kristoff remembers the crackown The New York Times' Nicholas Kristof recounts his eyewitness experience, standing in Tiananmen Square during the protests in 1989. Kristof gives his perspective on the crackdown and how China has changed since that infamous day twenty years ago. Here's an excerpt of Kristof's column:

It was exactly 20 years ago that I stood on the northwest corner of Tiananmen Square and watched "People's China" open fire on the people.

It was night; the gunfire roared in our ears; and the Avenue of Eternal Peace was streaked with blood. Uniformed army troops massed on the far end of the square, periodically raising their assault rifles and firing volleys directly at the crowd I was in, and we would all rush backward in terror until the firing stopped.

Taiwanese hold peaceful protest in Taipei Taiwan's Strait Times reports on the activity in Taipei Wednesday to mark the eve of the Tiananmen Square anniversary. Twenty protesters held a candle-lit vigil to commemorate the day:

The group, including several former legislators from different political parties, protested China's bloody crackdown on a peaceful student rally in Beijing in 1989, during which hundreds, possibly thousands, were killed.

"The Chinese communist party must admit their wrongdoing in the event and unveil the truth," a protester said in front of candles placed on the ground.

Here are news photos of the commemoration of the 20th anniversary of Tiananmen Square: