China's Tianhe-1A supercomputer has bumped the U.S.'s Jaguar from its top spot as the world's fastest supercomputer.

The New York Times writes, "The computer, known as Tianhe-1A, has 1.4 times the horsepower of the current top computer, which is at a national laboratory in Tennessee, as measured by the standard test used to gauge how well the systems handle mathematical calculations, said Jack Dongarra, a University of Tennessee computer scientist who maintains the official supercomputer rankings."

Dongarra also told the New York Times that China's Tianhe-1A "blows away the existing No. 1 machine."

NVIDIA noted in a press released that the Tianhe-1A is not only fast, but due to its reliance on GPUs as well as CPUs, it is also "3 times more power efficient -- the difference in power consumption is enough to provide electricity to over 5000 homes for a year."

The machine was developed by China's National University of Defense Technology (NUDT), which describes itself as "under the dual supervision of the Ministry of National Defense and the Ministry of Education."

See a photo of the Tianhe-1A below. 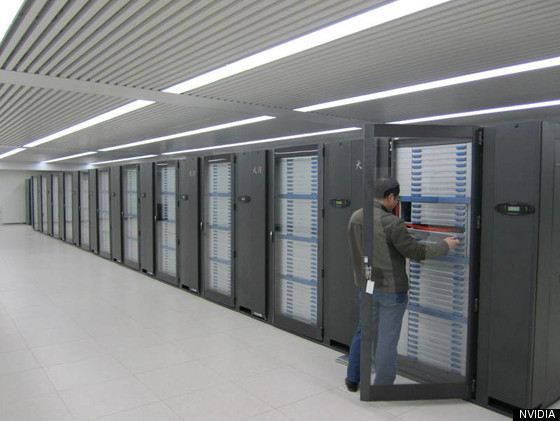