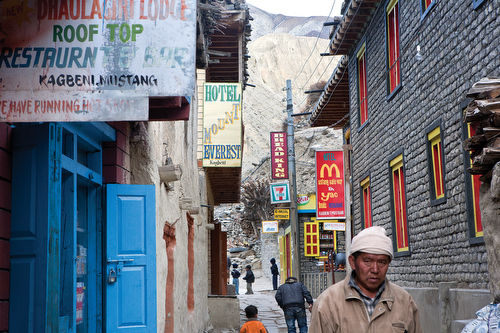 Khenpo Tenzin Sangpo is worried about the future of his community. He is the abbot of Kag Chode Thupten Samphel Ling Monastery, a Tibetan Buddhist monastery in the town of Kagbeni, which lies in the foothills of the Nepali Himalaya. There, in the protective folds of the Annapurna and Dauligiri ranges, he feels that the spiritual culture of his people is eroding.

Historically, Kagbeni was a mighty fortress town on the southern border of the region of Nepal called the Kingdom of Lo. The people of Lo -- the Loba -- are ethnically Tibetan and speak a dialect of Tibetan called Lowa. Their culture and identity is steeped in the practice of Tibetan Buddhism, and after the Chinese occupation of Tibet, the Loba community became one of the best surviving examples of traditional Tibetan culture left in the world. But all this is changing.

"The main threat that I find so far is lack of awareness and understanding among the local people about the rich value and benefit of their culture," Khenpo Tenzin Sangpo wrote in an e-mail. "And adoption of Western consumerist culture has also posed similar threats among the youths, making them more attentive and excited in obtaining a lifestyle with more, or only, material luxury."

In an era of globalization and modernization, traditional communities like the Loba are struggling to balance modernity with tradition as they join the developing world. A recent influx of new technologies, goods, and cultural influences from wealthier nations is shifting the way the people of Kagbeni view their lives. The traditional lifestyle, which until recently operated within a subsistence economy, is now seen as obsolete. Khenpo Tenzin feels the youth of Kagbeni are especially susceptible to this as they become educated in an increasingly global era that emphasizes the importance of financial status and stability. This is becoming, Khenpo Tenzin says, a turn away from a former, more spiritual way of life to a more material one.

"We live in a time where we have completely lost the true meaning of life and everything around us turned to be artificial," he writes. And yet, he acknowledges that development and globalization has improved the local economy; moreover, it has led to some important cultural preservation projects in the area. Because Kagbeni is a major stop on a trail through the Annapurna Range, it has drawn many tourists and created a booming tourism economy. The influx of foreigners to the region and increased awareness of Kagbeni's history has led to some valuable monastic and cultural restoration projects funded by international NGOs. Thus, Khenpo Tenzin is careful not to criticize globalization as a wholly negative influence. Instead, he sees it as a powerful force that should be tempered with careful stewardship of culture. And he holds that education is the key to a culturally rich and healthy community.

Khenpo's own academic life is testament to his devotion to education: "Khenpo," or "abbot," is a title only bestowed to monks who have achieved the highest learning and deepest understanding of Tibetan Buddhist philosophy. He feels that the right education can help young people understand and value their culture.

"Although modern educational facilities in most of the government or private boarding schools around the Himalayan region has made life more adjustable in leading a life in the 21st century, most of them have failed to include any program in their curriculum which educates students on cultural values and their benefits," he wrote. "So, the present educational system is also creating a vacant in the heart of today's youth from their traditional culture."

Khenpo Tenzin believes that for the Loba, spiritual values and cultural values go hand in hand. In 2009, he founded a monastic school at the Kag Chode Thupten Samphel Ling Monastery. In its inaugural year, his entire student body was just four novice monks. Today, he has 23 students. He remains devoted to teaching traditional cultural and spiritual values to Loba youth.

Khenpo also remains devoted to communicating the importance of cultural survival to the world at large. He writes, "The preservation of any culture or tradition is a very important and considerate work for humanity... Any culture preserved for future generations is naturally of great service for the younger generation, since they get to learn so many precious values from these cultures and traditions."