The 50th anniversary of the Dalai Lama's exile has generated much press and media attention.

News accounts have been full of the Dalai Lama's visa revocation which blocked him from speaking at an coming 2010 World Cup-related peace conference in South Africa, where two other Nobel Laureates where scheduled to speak.

In reading these articles, I find little background on China's side of the story and was curious to learn more about the conflict.

Many Chinese friends speak to me with great pride about how their country has profoundly helped Tibet -- especially the children. And our own government, as well as all 192 member states of the United Nations, acknowledges that Tibet is part of China. With the fiftieth anniversary of the events that sent the Dalai Lama into Indian exile, I set out to explore both sides, including the other side, the hugely unpopular Chinese side. 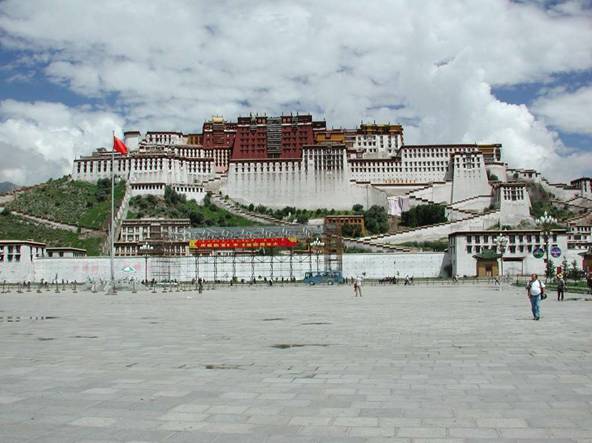 Potala Palace in the capital city of Lhasa.

The Chinese perspective has been buried here in the West, so I sat out to understand their perspective. China, like India and most of Africa, was split up by European colonization over the last two centuries. Kingdoms and nations were divided in ways that could serve only the dividers. It is hard to imagine one's country ripped apart. On our continent, it is far easier to grasp lost hegemony from a Mexican or Native American viewpoint. From the First Opium War -- waged by the British to protect their opium profits (1840-1842) -- until the end of the Second World War, China was invaded and colonized by Britain, France, Germany, Russia, Italy, Austria, the Netherlands, Spain, Portugal, Japan -- and even the United States. I realized the damage of such divisions most dramatically the first time I crossed the Volta River in West Africa. The same Ewe tribe that speaks English on one side (Ghana) speaks French on the other (Togo). Why? Generations of colonization. Colonization recognizes no boundaries. China was once larger -- from Taiwan to Tibet, from Mongolia to Hong Kong. According to some historians, China's area was about 16.8 million square kilometers (1.75 times of China's current area) during the Yuan Dynasty (1271-1368), during which time Tibet officially became an administrative region of China. 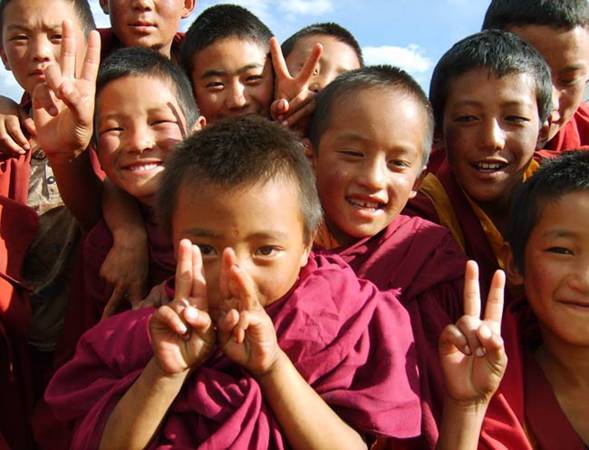 The British peeled away Hong Kong (1842) then tried to turn Tibet into a buffer zone between China and India. China's Nationalists -- the Kuomintang -- took Taiwan as they retreated after losing their civil war (1949). During the Civil War, the People's Liberation Army (PLA) gradually prevailed over the Kuomintang. The PLA liberated China province by province. Tibet was the last province reached. We are all aware of the charges against China since then. They are changes that worry and anger my American and Chinese friends, but for opposite reasons. They are repeated in every story about Tibet:

In driving the British and their friends from Tibet, China became the cruel Occupier.

In modernizing Tibet, China was eradicating the ethnic heritage of Tibet in a "cultural genocide."

In their resettling policies, the Chinese central and provincial government's massive aid has amounted to the "Hanificiation" of Tibet.

In filling Tibet with Chinese Tibetans have become a minority in their own land, with Tibetan women forced to marry Chinese men.

In sum, that Beijing has caused Tibetans "untold suffering" and forced them to live in "hell on earth."

I was an East Asian Studies Major in college and know at least something of the Middle Kingdom. I also learned in high school debate class that arguments can always be made from different perspectives. Can the true story of Tibet be told? Perhaps not. I recently interviewed the Hon. Ms. Zhang Dan, Counselor of the Permanent Mission of the People's Republic of China to the United Nations. Her knowledge of Tibet seemed vast.

By speaking to her, looking at the Chinese government's website for facts and figures, recalling my own academic background, and searching the web for neutral sources -- few and far between -- I have put together a sketch of Tibet. All facts and figures, unless otherwise noted, are according to recent white papers by the Information Office of China's State Council. The United Nations is not the keeper of provincial statistics. In general, national governments, not international governments, keep local stats -- from Texas to Tibet. I can no more authentic the numbers than I can any other governments' statistics. The official Chinese website for facts and figures may be found here. I would read it with the same eye you might read our own CIA's website. I understand that the Chinese Kingdom, which controlled Tibet in some way through many centuries and dynasties, lessened its control during the war of resistance against Japan (1937-1945) and the Chinese Civil War (1945-1949), peacefully reunited the region in 1951. The Dalai Lama, like his predecessors, was approved and recognized by China's central government. The title of Dalai Lama, by tradition, is conferred on an incarnate boy of a deceased Dalai Lama by an official decree of the Chinese central government. At the time of reunification, 5% of Tibetans -- the Upper, or Priest, Class -- owned everything. Some 95% of the Tibetan people were serfs, whom the Chinese viewed as "slaves." Wikipedia has a fascinating and recommended summary of serfdom as the socio-economic status of 'unfree' peasants under feudalism... "a condition of bondage or modified slavery that developed primarily during the High Middle Ages in Europe. Serfdom was the enforced labor of serfs on the fields of landowners, in return for protection and the right to work on their leased fields." At the time of reunification, Tibet was a Theocracy, like Puritan New England, or today's Iran where Sharia is used as Divine Word. The priests, or lamas and living Buddhas, as serf-owners, controlled everything. Wikipedia's entry on "lama" addresses this as well. Wikipedia is not an academic source. But, as mentioned, facts and figures that are not from the Chinese government -- or Dharamsala -- are in short supply. When the Dalai Lama left in 1959, the Tibetan lifespan was only 35 years. Infant mortality was a staggering 43%, according to China. U.N. and W.H.O. statistics are mostly unavailable.

Today the average Tibetan lives to be 67 years old, and only 3% of children are lost at childbirth. Throughout Han-dominated China, medicine is subsidized. In Tibet, it is free, Ms. Dan of the Chinese Mission explains. I have always been apprehensive about China's draconian birth control policies. Still, I have no better ideas for feeding well over one billion people. The number of orphans in China is staggering. (I have one son - adopted, and ethnically Chinese.) According to the Chinese Mission, Tibetans inside the Tibetan Autonomous Region, are immune from the Chinese government's family planning. Han Chinese residents in Tibet are not immune. In fact, the population there has doubled, from 1.2 million to 2.8 million, over the last 50 years. Only 5% of Tibet's population is Han Chinese (the ethnicity of the majority of Chinese) and other ethnic groups. Tibetans are amongst the fastest-growing ethnicities in all of China, according to the Chinese Mission. The Tibetan population increased by 40,000 in 2008, at a growth rate of 1.17%. Tibetans protest this figure, claiming they are a minority in their own country due to Han immigration. Again, what statistics can we find that are neutral?

A spokesperson for China wrote me: "When it comes to statistics or figures regarding the different provinces, municipalities and/or autonomous regions of China, the Chinese Government, exercising effective sovereignty and administration -- and having direct and constant access -- naturally has the most authoritative and trustworthy data." There are 56 ethnic groups in China, each speaking its own tongue, all united by Mandarin - as we in the U.S. are united speaking English. China's minorities, unlike our own, are specifically protected by their constitution. They live all across China, including in five separate antonymous regions. 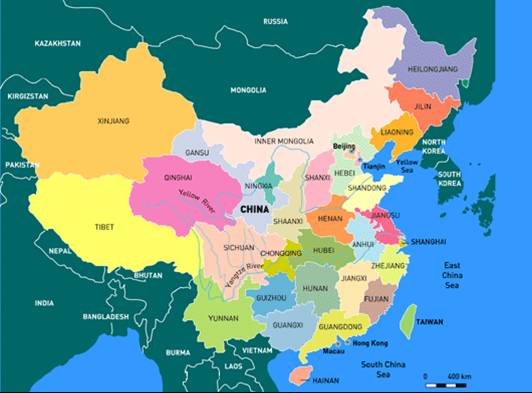 In addition to China's five autonomous regions, there are 30 autonomous prefectures, and 120 autonomous counties. These combined areas account for 76% of China's total. Incredibly, the five autonomous regions take up 45% of China's total area While it is illegal for our own government to subsidize religion, according to the Mission, the Chinese government pays to maintain over 1,780 monasteries throughout its land, with 46,000 monks/priests and nuns worship in them. In fact, Tibet seems to have the largest number of full-time Buddhist clergy anywhere in the world. Ms. Dan, Counselor of the Chinese Mission, explains that Tibetans today constitute 95% of Tibet. They are no longer starving. They live longer. Their babies die less often. They are better educated. If true, these are major advances. I am well aware that not all everything the Chinese government has done in Tibet has been positive, or appreciated by the Tibetans, and the fact that vital statistics in have improved does not justify the heavy-handed approach the Chinese government has sometimes taken in Tibet.

All I am saying is that the truth about Tibet is perhaps more nuanced than it has been presented by either side of the highly polarized debate. Having put my toe into this raging political river, I want to know more. My main global interest is the welfare of children, which presumably has improved in Tibet under Chinese rule in terms of health, education. I hope one day to travel to Tibet myself and witness the problems and solutions being worked out there. Comments are most welcome. Edited by Ethel Grodzins Romm and Laura Tyson Li. We, Jim Luce, Ethel Grodzins Romm and Laura Tyson Li, contribute the above article to the public domain.