Selden, a monk living in exile in Dharamsala, India, received a static-filled call from Tibet at 10:30 at night on May 15th. On the other end was a Tibetan man from Kirti Monastery in Sichuan, the province where China's devastating earthquake took tens of thousands of lives.

The man told Selden that the monastic community of Kirti had requested the Chinese authorities to allow them to perform prayers for the Chinese people who had suffered in the disaster.

Since March 6th, Kirti monastery has been surrounded by large numbers of Chinese security forces. The local Tibetan community has not been allowed access after large public demonstrations -- in which thousands of the monks participated -- resulted in mass arrests. For a few days, Kirti became a temporary morgue for fifteen Tibetans who eye witnesses claim were shot and killed by Chinese police while protesting non-violently. Scores of other protesters were reported to have been killed in the ensuing crackdown.

Two weeks later, after photographs of those killed in the protests were leaked to the outside world, the People's Armed Police and Public Security Bureau officials stormed the monastery and searched the rooms. During the raid, they defaced pictures of the Dalai Lama--an unimaginable offense to Tibetan monks. (Photo courtesy of the Tibetan Centre for Human Rights & Democracy.) 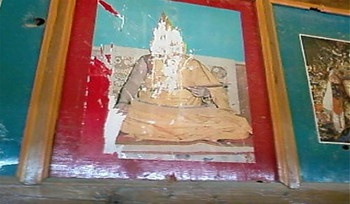 A photograph of the Dalai Lama defaced in a raid on Kirti Monastery, Tibet.

It was in this atmosphere that the monks of Kirti made their quiet request to do prayers for the Chinese quake victims. Since March, the monks of Kirti have not been allowed to conduct their usual Buddhist rituals, but on May 15th, they received special permission to make an exception. The monks began the day with a prayer offering ceremony and collected cash donations from among their members. They also wrote letters of condolences to the bereaved families.

The monks of Kirti monastery, located in Ngapa county in Amdo, also conveyed the following message to the Chinese people:

At 2:28 PM on May 12th, 2008, there was an earthquake in China, affecting Sichuan province and other areas, and resulting in tens of thousands of lives lost, with many others badly injured or bereaved. Some people trapped under the rubble cried over their mobile phones. It is still unknown whether some of those who were trapped are dead or alive. In Lunga County, all the roads were damaged so that it was impossible for vehicles to pass through, and the only way to travel was by airplane or helicopter. Seeing such widescale destruction, I strongly request permission to help with whatever is needed and to do whatever is helpful to those who are in need.

I request permission to work hard to allow the dead to pass without fear, to have no suffering in their next life, and to be reborn in lands which are peaceful and prosperous. And for all the ones who are left behind to be relieved from their sadness, and for those who are injured to be relieved from their pain and any other unpleasant conditions so that they may be able to experience a happy life once again.

As Lama Tsong Khapa [a highly renowned 14th century Tibetan master] said, "To all the people who insult me, and speak to others about my shameful deeds, may I, without hatred, forgive them and speak to them only in a positive way."

I request to perform religious ceremonies, if there is a way. If not, then I request to merely say mantras such as OM MANI PADME HUNG, etc. [the mantra of the Buddha of Compassion] for the most beneficial effect for the needy and for those who have passed away.

How is it possible to enoy complete freedom and a good climate? How can we be prosperous and bring renewed happiness to our lives? How can we avoid diseases, wars, drought, and other natural disasters? All the scholars and world leaders should discuss these things thoroughly. The religious figures of the world should all pray hard.

This message is from 3,000 monks at Ngaba Kirti Monastery in South Amdo on May 15th, 2008, with the hope that it be received graciously by all the knowledgeable bodies outside [Tibet]. It has been recorded as read on the telephone. On the day this message was sent, special religious ceremonies were performed to help allieviate the destruction wrought by the earthquake."

Below is what the local Tibetans of Amdo Ngaba said about the above statement:

1. Buddhism means helping others without discrimination. As we are followers of the Buddha, no matter what kinds of situations we may face, we never transgress this teaching. We are doing the same thing this time.

2. Since March 10th, in all places covering the three main regions of Tibet, Tibetans protested against the Chinese authorities. The Chinese Communist Party sent in personnel in an organized fashion, and marked every Tibetan, especially monks, as criminals. Bloody killings and beatings that were completely inhuman took place--too much for our hearts to hear about, and too much for our eyes to witness. Innocent Tibetans were labeled as criminals in the minds of the Chinese, with whom we have shared thousands of years of history as neighbors. As a result of these negative views, Tibetans, especially monks, are treated more like enemies by ordinary Chinese people. But from our side, we are making it clear that we are not protesting against ordinary Chinese people but against the policies of the Chinese government towards Tibet.

3. Everyone can see that no matter what happens with the Tibetan issue, Tibetans and Chinese have to live side by side as neighbors. We are seriously stating our hope for the improvement of the relationship between both peoples.

That improved relationship may presently seem out of reach, but it's sentiments like these that could bring it closer.

Rebecca Novick is a writer and Executive Producer of The Tibet Connection radio program. She is currently based in Dharamsala, India.