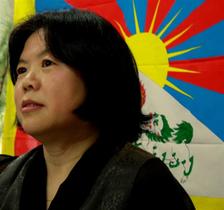 It's standing room only in the modest hall of the Dharamsala Welfare Office. People are sitting cross-legged on the floor, so tightly they're almost in each others' laps. The over-flow has spilled out onto the street. Monks peer in through the windows. Tibetan exiles from all walks of life in this rustic mountain community have come to hear a talk by a Chinese journalist. Sitting at a table next to her Tibetan translator is a soft-spoken Chinese woman with an easy smile with the look of someone quietly sure of her truth. She begins to talk about her time spent in Tibet, her appreciation of its culture and her affection for its people. A youthful 48, Zhu Rui seems perfectly at ease before her first Tibetan audience.

The expressions on the faces in the room begin to change from guarded skepticism to rapt attention as the audience hears words that none of them ever expected from a Chinese national. During the Q & A, the questions come thick and fast -- "How can we improve Tibetan-Chinese friendship?" "What do you think about China's historical claim to Tibet?" One Tibetan man asks about Zhu Rui's impressions from meeting the Dalai Lama. She describes how the room in which they met was uncomfortably cold because the air conditioner was set too high. Instead of asking his attendant, the Dalai Lama had gone over and turned it down by himself. A simple act, that to Zhu Rui, spoke volumes about him as a person and a leader. "If Hu Jintao did this instead of delegating the task to a subordinate, Chinese people would be totally shocked!" she joked, evoking an enthusiastic round of applause. Zhu Rui (pronounced too ree) has met the Dalai Lama twice now. "He has such simplicity," she says, "which is why many Chinese leaders don't understand him. They are much too complicated."

In China, the media is controlled by the government. Journalists working for Chinese media who want to visit Dharamsala in any official capacity have to apply for a permit. Rarely, if ever, is it granted. One Chinese journalist said, "I have applied many times for a permit to Dharamsala but it's always denied. They say it's for my own security." Although she had felt very at home in Tibet, Zhu Rui didn't know what to expect in Dharamsala; the stronghold of the so-called Dalai Clique. All she had heard was that there were Tibetan terrorist groups operating there, and about one of their most notorious ringleaders -- the red headband-wearing "radical" Tenzin Tsundue.

But Zhu Rui found the town to be quite different from its reputation in the Chinese media. "Anybody you run into on the street immediately becomes your friend as soon as you start talking with them," she says. When she finally met Tenzin Tsundue, she admitted that she thought she might be taking her life into her hands. But instead of a terrorist, she found a poet and community organizer with a Gandhian commitment to non-violence.

While the Tibetan community seems to have embraced Zhu Rui with open arms, she has been less warmly received by some of her fellow countrymen. A Canadian citizen based in Calgary, Alberta, Zhu Rui has been advised by her close friends not to return to China for her own safety. Some of the strongest reactions she has received have come in response to a letter she wrote to the Dalai Lama that she posted on her blog. The letter begins:

I have to tell you that my impression of you in my childhood and youth was that you were a flayer of human skin, a demon who picked flesh from human bones. From this point alone, you have probably guessed that I am Han Chinese.

Zhu Rui continues the letter with a declaration of her respect for Tibetan culture and her concern about what she views as China's colonial presence in Tibet. She speaks of a growing number of Chinese people demanding a resolution of the Tibet problem by means of respect, tolerance, consultation and dialog, and ends: From a Han who sympathizes with the suffering of the Tibetan people, and who has limitless respect for you: Zhu Rui.

Some of the comments she received to this posting were so vilifying that she can't bring herself to describe them. "Traitor" is one of the milder names she's been called. Yet Zhu Rui is convinced that her detractors do not represent the majority, and that there is a growing number of Chinese who admire the Dalai Lama and are sympathetic to the aspirations of Tibetan people.

In the grounds of Shungtsep Nunnery, she talks about her journey from critic of Tibetan society to one of its most passionate advocates. "I have been through such a transformation," she says, "I want to tell every one what I saw and what I heard, even if it's just to a single Chinese person." She has come to Dharamsala to complete a book called Brief Introduction to the Contribution Made by the Dalai Lama to Tibetan Culture and Humanity. The book is a response to the Chinese government's White Paper on Tibet that was published in June 2008. (China recently published another White Paper on Tibet.) In the foreword to her book, she writes that she was "astonished to see that the White Paper on Tibet was filled with hackneyed phrases, far-fetched comparisons and shrewd lies."

As a young girl growing up in northeast China, Zhu Rui used to attend meetings called recalling the bitterness and thinking about the sweetness. "In the meetings, we used criticize the Dalai Lama as the symbol of serfdom and we had to eat a kind of food that we were told was eaten by the serfs in old Tibet. It tasted awfully bitter. I used to really pity those poor Tibetans." She laughs at the memory.

In the late 1980s she read some books that aroused her curiosity, such as Seven Years in Tibet by Heinrich Harrer. She found herself desperately wanting to visit Tibet, and to see what it was like for herself. In 1997, she traveled there as a tourist. On her way east, she arrived at Kumbum Monastery where she saw pilgrims performing full-body prostrations on big flat wooden boards. "I was really amazed that there were still people with such devotion in this world," she recalls, "because there are no longer such things in China."

Before this, Zhu Rui had never even seen a photo of the Dalai Lama. "When I saw his picture for the first time, I couldn't believe my eyes -- that this was the man who we'd criticized for the last 50 years, the man who in my imagination was a monster. It was astonishing for me to see his face, so full of kindness."

While she was in Lhasa, she asked a Chinese restaurant owner for directions to the Tibetan quarter. He warned her that it was too dangerous to got there because it was "full of Tibetans". Zhu Rui didn't heed his advice, and she found herself drawn again and again to the Tibetan neighborhoods of the city. "I just felt at ease there," she says. Zhu Rui didn't know it, but she had arrived in the capital towards the end of a decade of sporadic popular unrest. One day in March, she saw a man shouting "Free Tibet!" in the street. She remembers the question rising in her mind: If the Chinese Communist Party has liberated Tibet, why is this man shouting for freedom? Many years later she would explore this question more deeply in her article published after the 2008 demonstrations in Tibet called Why Tibetans Protest.

In 1999, Zhu Rui accepted an offer to work as a writer and editor for a magazine of the Tibetan Literature Association in Lhasa. She began to meet Tibetans from different backgrounds, and became especially interested in the life stories of the older generation who remembered what life was like before the Chinese takeover. At first, they were reluctant to speak with her, but she eventually began to win their trust. "When they were telling me their stories, they were very sincere and genuine," she says. "I just felt very close to them."

She came to befriend a number of people who had formerly been members of the aristocracy. "It was such a great opportunity for me to listen to their stories; those Tibetans who in earlier times were criticized for being serf-owners. I had been taught that they were the exploiting class, but their personal histories were totally different from what I'd learned. It was from them that I came to understand the meaning of kindness."

While Zhu Rui was vacationing at some hot springs, she met some local people and was shocked at the poverty she saw. "Their houses were near to collapse," she recalls. But what surprised her even more was what they told her about life in Tibet before the Chinese takeover in 1959. "They said that in earlier times, even ordinary farmers used to live in three-story buildings -- the kind made from stone with the top floor used as a family prayer hall, the family house on the middle floor and the ground floor for the livestock. They never ran short of food, they had plenty of yaks and sheep. They were really pretty satisfied with their lives back then. This is completely different from what we read in text-books and what we're told."

Zhu Rui sees Beijing's announcement of March 28th 2008 as Serf Liberation Day, commemorating the 50th anniversary of the dissolution of the Tibetan parliament, as a provocative move. "I think that it's a well-planned scheme aimed at escalating the resentment and anger. When this resentment reaches a boiling point, then they have an excuse for responding with force." When the March 2008 demonstrations erupted in Tibet, Zhu Rui was not surprised. "I understood what it was all about--the pain in the hearts of the Tibetans. I found it so absurd when the Communist Party accused the Dalai Lama of inciting the protests."

Zhu Rui believes that China's government is less robust than it appears. "People are becoming desperate under this kind of rule. They are protesting all over China, not just inside Tibet." When asked what she thinks is the biggest threat to the present leadership, Zhu Rui doesn't hesitate. "The will of the people," she says.

Though not a practicing Buddhist, she wonders if she has a karmic connection with Tibet from a previous life. "As a writer, I feel that Tibet is my home. I miss it all the time. Whenever I hold a pen, it is all about Tibet. I won't write about anything else but Tibet until the end of my life."

It was dark by the time Zhu Rui finished her talk at the Welfare Office hall. Her route back to the nunnery took her down a small path that winds for ten minutes through the woods. The man who made sure that she returned safely, lighting her way with his flashlight? The feared terrorist of her imaginings -- Tenzin Tsundue.

Interview translation by Tenzin Losel. Rebecca Novick is a writer and the founding producer of The Tibet Connection radio program. She is currently based in Dharamsala, India.