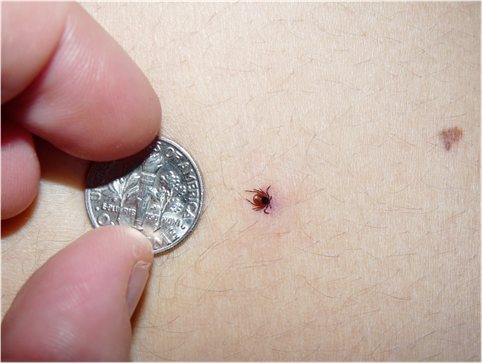 In the summer of 1975 a group of children who often played together developed an unusual flu-like illness with severe joint pain. They were diagnosed with Juvenile Rheumatoid Arthritis (JRA). All of them lived in a small town at the mouth of the Connecticut River called Lyme. The story of their disease contains all the elements of a good novel; mystery, loss, blood, empathy, indifference, conflict, controversy and conspiracy, truth and fiction.

Doctors suspect JRA when they see kids with persistent joint pain or swelling, unexplained skin rashes, and fever associated with swelling of lymph nodes or inflammation of internal organs. No single test can be used to make the diagnosis. Both the cause and the cure of JRA, an autoimmune disorder, are unknown. But it is not an infectious disease.

Polly Murray, a skeptical mother of two sick kids whose knees were so swollen they couldn't walk without crutches, didn't think the diagnosis made any sense. None of the physicians could explain what would cause a localized outbreak of an autoimmune condition. She later contracted the disorder and felt unheard by the local doctors. Murray alerted the Connecticut Department of Health. It is fair to say that Polly Murray was the first Lyme Disease investigator.

Connecticut's chief epidemiologist contacted Yale University. Dr. Allen Steere, then a fellow there in rheumatology, was assigned to investigate. The chief informed Steele that a concerned mother in Lyme had reported a curious cluster of 39 JRA cases. In any given year, one case of JRA in an area the size of Lyme might be expected.

Three years earlier, Steere, then in his last year of medical school at Columbia University, heard from an Army recruiter that 90 percentof new docs would be drafted and shipped over to southeast Asia, unless able to provide alternative service. Alternative service became Steere's focus. His research led to a branch of the Center for Disease Control (CDC), the Epidemic Intelligence Service, that investigates epidemic outbreaks. After two years of training in epidemiology, he had developed a specialty, arthritic conditions.

Steere went to work exploring what the 51 cases (39 kids and 12 adults) had in common. While the physical exams were unhelpful many patients' stories included two elements . Many described a skin lesion with an expanding bull's eye appearance around 4 weeks before the onset of arthritic symptoms. This type of rash, erythema chronicum migrans, had been described in Europe in the setting of infection. The other thing that stood out was a geographic and temporal pattern. All patients lived in wooded areas. Not a single case had been found in town centers.

This was the first time rheumatoid arthritis had clustered in time and place. It made no sense. All these factors moved Steere toward an infectious insect theory. Then serendipity, the fortunate scientist's muse, delivered the missing piece. An ecologist engaged in tracking Connecticut's tick population sought Steere's advice for a tick bite. He brought the offending tick to the consultation. Both men had been mapping their subjects, ticks and JRA cases. Their maps were identical.

In 1977 Steere published his seminal paper, Lyme arthritis: an epidemic of oligoarticular arthritis in children and adults in three Connecticut communities. In it, he described a previously unrecognized clinical entity, the epidemiology of which suggested transmission by an arthropod vector (tick). Despite the protests of local officials, his appellation stuck with the minor alteration to Lyme Disease.

It would be five years before the infectious agent was identified.

In 1982, Willy Bergdorfer, a scientist specializing in diseases transmitted by ticks, fleas and mosquitoes, was doing field research on Shelter Island. A particularly high prevalence of Lyme Disease had been reported there. He collected and dissected hundreds of ticks and found that most of them contained the same bacterium. Antibody from Lyme patients reacted positively with the bacterium. In keeping with microbiology tradition, the bacterium was named after its founder, hence Borrelia borgdorferi or Bb, for short.

One might think this would tie things up neatly. Tick infected with Bb bites human who develops Lyme Disease. Antibiotics kill Bb. Patient cured. Disease threat over. Chalk up another victory for modern medicine. Case closed.

Nothing could be further from the truth.

A recent CDC study reported that in 2013, there were 260 counties throughout the United States that experienced double the number of Lyme Disease cases expected, up from 130 a decade earlier. Rather than the localized hot zones seen ten years ago, large regions are being invaded. The entire state of Connecticut is now considered high risk and similar spread continues in Massachusetts and New Hampshire. Expansion out of northern Wisconsin to Michigan, Minnesota and Iowa has been documented. The number of cases per year has exploded from 30,000 to 300,000.

Not only is the disease spreading, but practitioners battle over fundamentals such as diagnostic criteria, appropriate treatment and the validity of chronic forms of the disease. A growing population of disaffected patients who continue to suffer after receiving the recommended treatment have organized in an effort to confront what they see as medical neglect. The situation has grown so contentious that Governor Cuomo signed the so called Lyme Doctor Protection Act last year. The law prohibits the New York state board of medicine from investigating complaints of substandard care "based solely on their recommendation or provision of treatment modality that is currently not universally accepted by the medical profession."

Even Steere has gone from savior to sinner in many patients' eyes.
In the early 1990s he became concerned that Lyme disease was slipping into a default diagnosis for a multitude of poorly understood conditions ranging from chronic fatigue syndrome and fibromyalgia to hypochondria. Writing in the Journal of the American Medical Association, Steere expressed concern that many people with no evidence of past or present Lyme disease receiving antibiotic treatments, especially treatments beyond the recommended four week treatment guideline protocol, were being done more harm than good.

The article was incendiary. Advocacy groups considered it a blatant denial of their suffering. Steere's words were heard as contempt not concern. Before this, he had been hailed as the pioneer who uncovered the cause of their condition and paved the way for it to gain acceptance as a legitimate diagnosis. After the JAMA article he was perceived by many as part of the problem.

How does an infectious disease, with an identified and treatable cause, grow exponentially and sow such conflict?

The answer involves a broad spectrum of factors, from climate change and expansion of animal populations to the mysterious nature of spirochete bacteria and, perhaps most importantly, our culture's unfortunate management of patients whose symptoms do not fit our theory. There are many unanswered questions.

So what should you know about Lyme Disease?

Here is what the CDC recommends:

Tick Removal
Grasp the tick as close to the skin as possible with fine-tipped tweezers and pull straight up
After removal clean the area and hands with alcohol, iodine or soap
Kill tick by submersing it in alcohol

Treatment
Most people treated with appropriate antibiotics in the early stages of Lyme disease usually recover rapidly and completely.
In a some cases, these symptoms can last for more than 6 months
Prolonged antibiotic treatment has not been helpful in patients who experience persistent symptoms