Tiffany Mitchell, a woman who says she witnessed a police officer shoot and kill Michael Brown in Ferguson, Missouri, shared her story during an appearance on CNN with her attorney Wednesday night.

Mitchell said she was driving when she saw Brown trying to pull away from an officer as the two were "tussling through a window." She said she had hoped to get a video because the incident "just didn't look right," but failed to get her camera out in time.

"I didn't know exactly what was going on, but I knew it didn't look right for someone to be wrestling with the police through the police window, but I didn't get a video because a shot was fired through the window, so I tried to get out of the way," Mitchell said.

Mitchell then described what she saw happen between Brown and the police officer.

"As I pull onto the side, the kid, he finally gets away, he starts running. As he runs the police get out of his vehicle and he follows behind him, shooting," Mitchell said. "And the kid's body jerked as if he was hit from behind, and he turns around and puts his hands up like this, and the cop continued to fire until he just dropped down to the ground and his face just smacks the concrete." 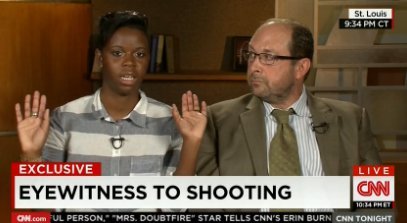 Mitchell clarified she heard a shot after she saw Brown trying to pull away from the cop, and said even after Brown turned to face the cop and put his hands in the air, "the cop continued to come up on him and shoot him until he fell down to the ground." She said she counted "more than about five or six shots."

Mitchell also said she only saw one officer involved in the incident, and described him as a "white male, kind of tall, not too big."

Mitchell said she received no pressure to change her story from detectives who on the case, but said the cops that arrived at the scene "were very rude" to bystanders and "didn't want to tell" the public what had happened.

"They showed no kind of remorse for what happened to the kid at all," she said.

Mitchell's attorney said she gave a statement to the St. Louis County detectives right after the incident.

Watch a clip of Mitchell on CNN above.