Some years ago, I was enveloped by the desire to see our children grow up to be poets. I used to talk to them about poetic metaphors, rhymes and read to them excerpts from the biographies of famous poets. When the kids were learning about haikus at school, I took the opportunity to pontificate on the controversies surrounding the 5-7-5 syllable counts and the difficulties of imposing classic Japanese schemes on the English language, which abounds in diphthongs and long syllables.

The feedback from our children was quite mixed, ranging from polite questions such as "Do you know how long this will take?" to less polite snores. I had apparently not yet succeeded in my attempts to awaken their inner poet. 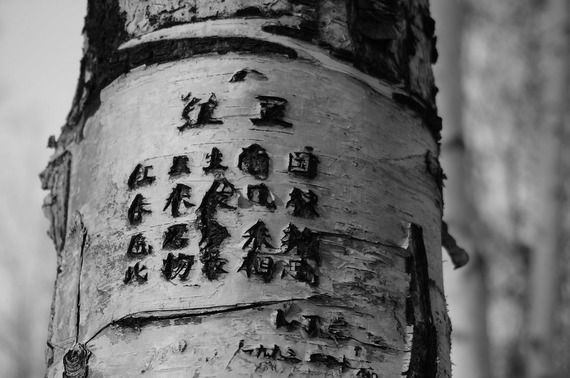 Our younger son was about eight years old, when we found out about a wonderful opportunity to inculcate the love of literature into our children: The Chicago Printers Row Literature Festival! I was especially excited by the fact that they would have a special "Lil' Lit" area, just for children. I convinced the whole family to go - promising to reward each kid with $5 if they accompanied us. I hoped that my poetry monologues had prepared the children for the poetic muses that they would encounter at the festival.

Even though it was early June, Chicago was experiencing one of its rare June Gloom weekends with cloudy, drizzly weather and frosty breezes. After exiting the parking garage, our kids tried to renegotiate the promised $5 reward in light of the unpleasant weather. I brushed off their whining and charged towards the long-awaited beacon of literary pleasure.

Once we arrived at "Lil' Lit", we saw a bunch of near-empty booths and an elderly author reading from a book to a couple of five-year olds, surrounded by fifty empty seats. The few booth owners looked at us with great expectations. They had been staking out the crowd of adults, walking past them and not been able to spot any children, so my children quickly become the center of attention at "Lil' Lit".

The children were not too enthusiastic about sitting down with the author who was reading from her book, perhaps because her sparse audience had the same facial expressions that our kids exhibited when I talked about poetry. We looked around and spotted a giant yellow "Bouncy Book" which caught the kids' attention. But before they could rush over there and begin jumping on it, they saw that the ginormous hollow book had a hole and kept on deflating.

One of the booths was called "Creative Creations". I was puzzling about the title, but relieved when our kids volunteered to participate in the activity. Apparently, this booth was giving children some chalk so that they could unleash their creativity. All three of our children took to the idea and started drawing and writing on the sidewalk in beautiful rainbow colors. For some strange reason, my eight year old son took his "ninja glove" out of his pocket and grabbed a green chalk. I relaxed, and my wife and I strolled around in the area, pleased to live in Chicago, a city that offered such cultural enrichment for children. I uttered a silent prayer of thanks for the fact that we had left dreary Indiana and recently moved to Chicago.

After about fifteen minutes or so, we returned to the booth of creativity. One of the ladies who operated the booth came up to me and said, "Excuse me sir, your son has ...ahem...written a...haiku..."

I couldn't believe it! All my hard work had finally paid off. Even though they had pretended to not to listen, at least one of them had learned how to write a haiku. I was not sure if I was more proud of his accomplishment or my superb teaching.

I smiled and walked to the area of the sidewalk where the haiku was written.

I was first going to count the syllables, but once I started reading it, I stopped counting:

Torture comes to me,

I did not know how to respond to the accusatory glances of the lady. I looked at my son, who was folding away his "ninja glove".

He then calmly asked "Can we go now?"

I saw the deflating bouncy book in the background and I nodded, trying to hide my embarrassment with a half-hearted smile.

His haiku brought about the end of the poetry monologue series in our house.

Note: An earlier version of this article was first published on the 3Quarksdaily blog.