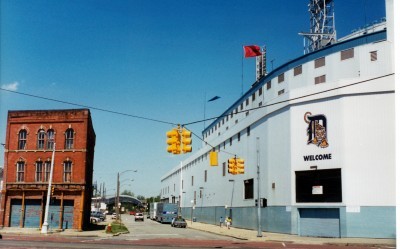 I've often wondered about the emotional hitching post that is a ballpark. And when anyone says "ballpark", we all know that it's not referring to any other sports field besides baseball's.

I only live a few miles from five little league fields that I spent five summers of my childhood praying that the ball wouldn't be hit to me in right field. (That, of course, was in the final two innings, when the coach decided it was safe to take me off the scorebook.) After a brief try at second base where I smoothly fielded a grounder and sent it sailing 15 feet over the first baseman, into the startled bleachers, I decided that the slower-paced outfield was probably my calling. Unfortunately, with the leisure of right field came its lunar surface that could easily send the ball to the right, left, straight up, between my legs -- or worse, right at my glasses or teeth.

I drive by these parks and am immediately whisked into the nostalgia of those games. My anxieties and prayers that the game end quickly without my disastrous involvement are minor compared to the the actual thrill of catching a fly ball, getting a hit but most importantly the friends I made at practice, the jokes I heard on the bench and the feeling that I was part of a group of people that accepted me. So when junior high began and our six elementary schools were merged into one pool, I actually knew a few guys in my English class when I walked into the strange room.

The down-time, the moments that happen when the game isn't occupying all of your attention, seems to make a ballpark special.

For 10 years, there were some ancient ruins a few miles down the road from Comerica Park, an escape from the modern facility for families with restaurants, amusement park rides, museum kiosks, piped in radio broadcasts in the bathroom and flat-screens over the concession stands. 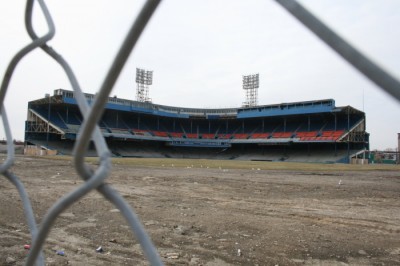 A couple years ago, when they were finally tearing down the last sections of Tiger Stadium, I was able to get some pictures almost from the same angle that I saw the most exciting game of my life, a 1-0 victory over the Toronto Blue Jays on the last day of the 1987 season. (Here's a link to Ernie Harwell's call of the final inning.) 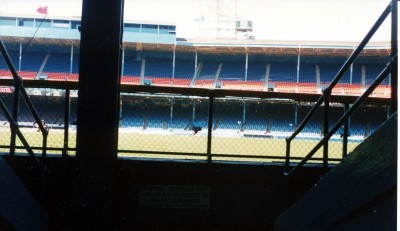 For me, the magic of a ballpark is the green field when you emerge from under the stands.

I stood in a two hour line for all three games of the series to be mashed into the lower-deck bleachers, hoping Detroit would sweep the Jays and get a shot at the Minnesota Twins in the playoffs.

It was an incredibly stressful game as I watched surrounded by hundreds of fans from Windsor, Ontario who certainly weren't wearing the old English D. But as Frank Tanana prevailed and held Larry Herndon's lone solo homer in place, I realized by that ninth inning what was perhaps the greatest part of the game was the amazing time I was having with twenty total strangers that I knew I would never see again. 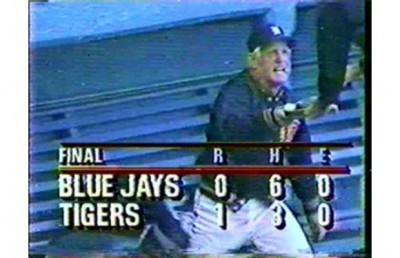 The razing of Tiger Stadium for Detroit fans was like seeing a terminally ill friend slowly leave. It took place over a few years. Now the bleachers are gone, but they've allowed the center field flagpole, the pitcher's mound and the entrance gates to remain. 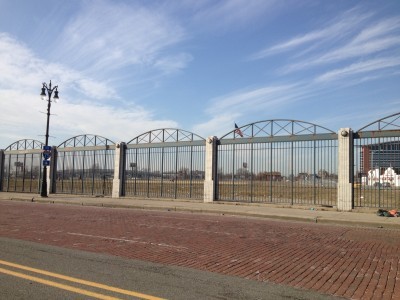 A group of Samaritans, the Navin Field Grounds Crew, keeps the grass mowed and there are often pickup games where fans like me can run the same base path as Babe Ruth, Ted Williams, Al Kaline, Reggie Jackson and 85 percent of the rest of the Hall of Fame. The haunting memories are tangible as you slowly drive around the Michigan and Trumbull block, rewinding your vision to see the game the way you did at numerous times.

In 1999, the last season at Tiger Stadium, they offered afternoon tours. My family was finally able to walk the field and sit in the Tigers dugout. 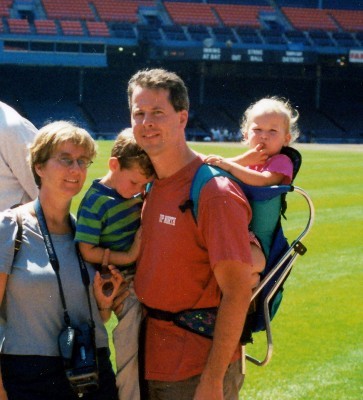 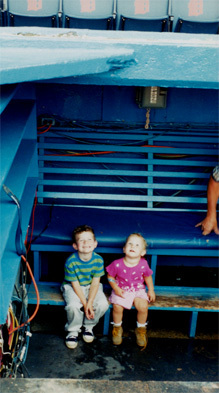 But the tour guides were more compassionate, knowing that the real pull of all the people on the tour was to walk the entire circumference of the seating area as the ghosts replayed themselves. 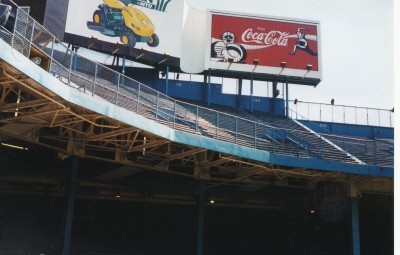 Wherever you walked, you could remember a certain game, who you were sitting with and of course key moments of the game. 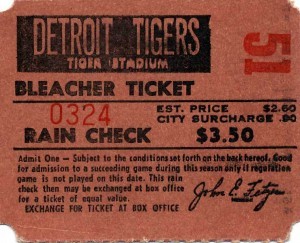 I spent $3.50 20 different times in 1984 to sit in the upper-deck bleachers and absorb as much as I could of that magical team. 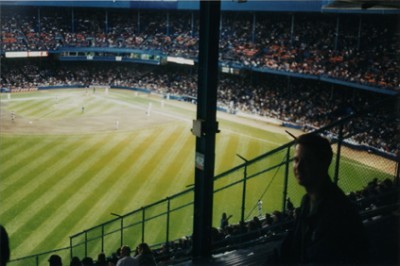 I hopped on a train to make it to Game 4 of the World Series and was once again in those same bleachers as "Fat Bob" sang the national anthem below me. 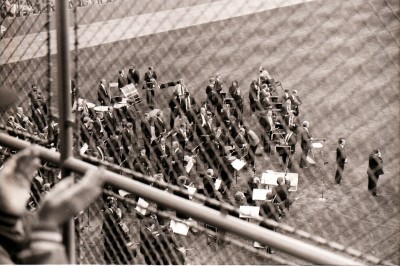 When the lineup was announced, I was able to zoom in through the chain link fence to capture this shot... 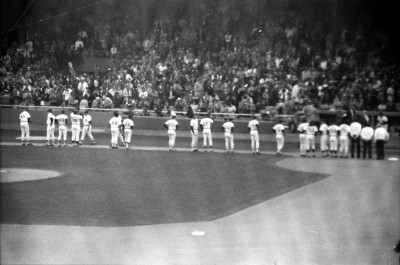 But it was also who I was with. That World Series Game, we car pooled down with our great friend and lifetime Tigers fan (and sufferer) Shirley Simmons along with my sisters Katie, Colleen and our friend Sue Fisher. We, of course, parked in my dad's favorite parking spot by the church. 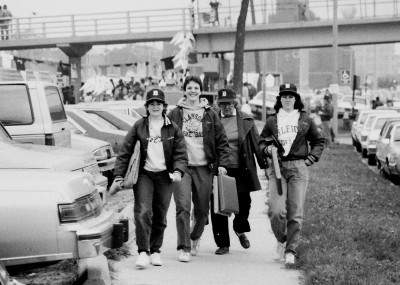 Alan Trammell hit two homers that afternoon and the next day, Kirk Gibson would hit his memorable home run off Goose Gossage to cement the series.

My dad told me that his father once had gone to every home game in a season of the 1930s. Grandpa Walsh was such a fan that he would keep score as he listened to the game on the radio. I found his scorebook a few years ago and a schedule fell out of it.

It's funny what you hang on to.

The last night I spent with my father, we arrived at the game late and finally used rain-checks from April on a cold September 23rd evening. The Tigers were one-game under .500--which is as close to the World Series as we had come since that Blue Jays game 10 years earlier. We almost didn't go, but decided to brave the cold for a few innings and not let the tickets go to waste.

The stadium was nearly empty, so we were able to sit anywhere we wanted--and I was finally able to go to a unique spot that had intrigued me all my life--this weird overhang down the right-field line. (I took this picture two years later, the second-to-last game ever played here.) 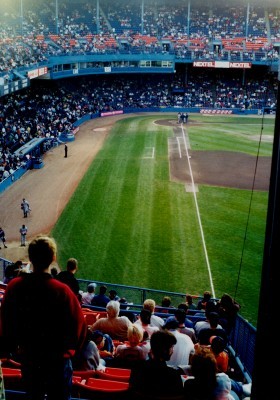 While we walked to the seats, my dad pointed out where his father had spent the entire summer of 1938, just under the press box down the third base line. When we got to the seats they offered a spectacular view that made us feel like we were hovering over the action.

We left early, it was freezing, we both had to work the next day and my dad was fighting a bad head cold. But we stayed long enough to see some good hits and one player reach 100 RBI. More importantly, we talked about both of our rough days at work and compared notes. By the fourth inning, we weren't thinking about work anymore but instead were laughing with the fellows sitting in front of us. One guy looked just like the golfer, Tom Kite. I remember Dad laughing about that when I mentioned it.

Three days later, my father was killed in a car accident. But one dear friend actually gave me the videotape of the game and on a foul ball, the camera actually caught us and I was able to get a screen-shot of it. (It's a little Zapruder-like, but I'm very glad I've got this last shot of us together.) 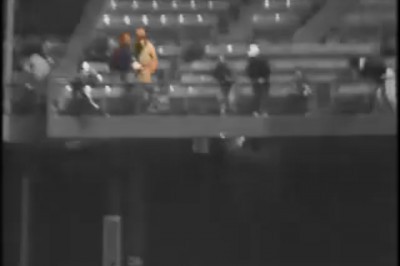 When we were walking around the stadium on that tour in 1999, I was able to return to our final night together simply by looking up at our seats. 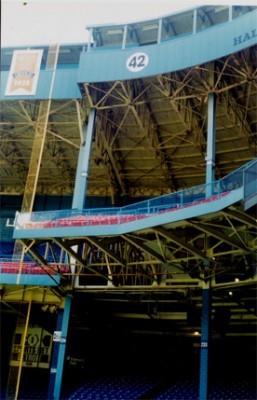 And I guess that's what makes a ballpark different than an arena, a stadium or a field. It's the leisure time that you have between pitches when the outfielders are playing catch before the batter steps up. In a way, it's a break in your life where you spend time with folks you care about and it doesn't even really matter who won the game.

Kevin Walsh is also co-producer of the web-series Digging Detroit. In the following episode, they explore the team of volunteers who rescued the field from ruin--the Navin Field Grounds Crew with a special interview with Jason Roche whose documentary "Stealing Home" was a winner at the 2014 Freep Film Festival.