Despite a balky back that brought him to his knees at one point, Tiger Woods thought he had delivered a vintage moment at The Barclays on Sunday. Instead, his already painful day ended with yet another grimace.

Woods arrived on the 18th tee at Liberty National knowing that a birdie would tie Adam Scott, the clubhouse leader at 11-under, to force a playoff. Sporting his signature Sunday red, Woods drove his tee shot into the fairway. With his second swing on the par-4 hole, Woods overshot the green. Needing to sink a 26-foot putt to get to 11-under and force a playoff with Scott, Woods lined up his shot and swung. The ball jumped off his putter and rolled true toward the cup .... and then stopped just an inch shy.

"I hit a good putt. I thought I made it," Woods told ESPN after finishing his round with par on a 18 and a share of second place. "It was a little double breaker and I thought I poured it."

With Woods' day done and Scott relegated to spectating as the last group finished, Gary Woodland arrived at the 18th green with a chance of his own to force a playoff. With the crowd in Jersey City hoping for some extra golf, he also missed a birdie chance that would force Scott to pick up his clubs again. Woods and Woodland were among four tied for second place at 10-under for the tournament.

"I can't believe it, to be honest," Scott told CBS after his win was secured. "I just played a good round today and I came in and really didn't think it had a chance. But obviously, things went my way a lot out there."

Before Woods and Woodland missed opportunities to force a playoff, Justin Rose failed to capitalize on a gilt-edged chance at the outright lead. The winner of the 2013 U.S. open three-putted on the 18th hole and joined the 10-under club.

"I got too aggressive," Rose said, via The Associated Press. "I thought it was a putt to win the tournament. It's tough to take."

With his foes faltering behind, Scott took home an unlikely win in the first event of the 2013 FedEx Playoffs. 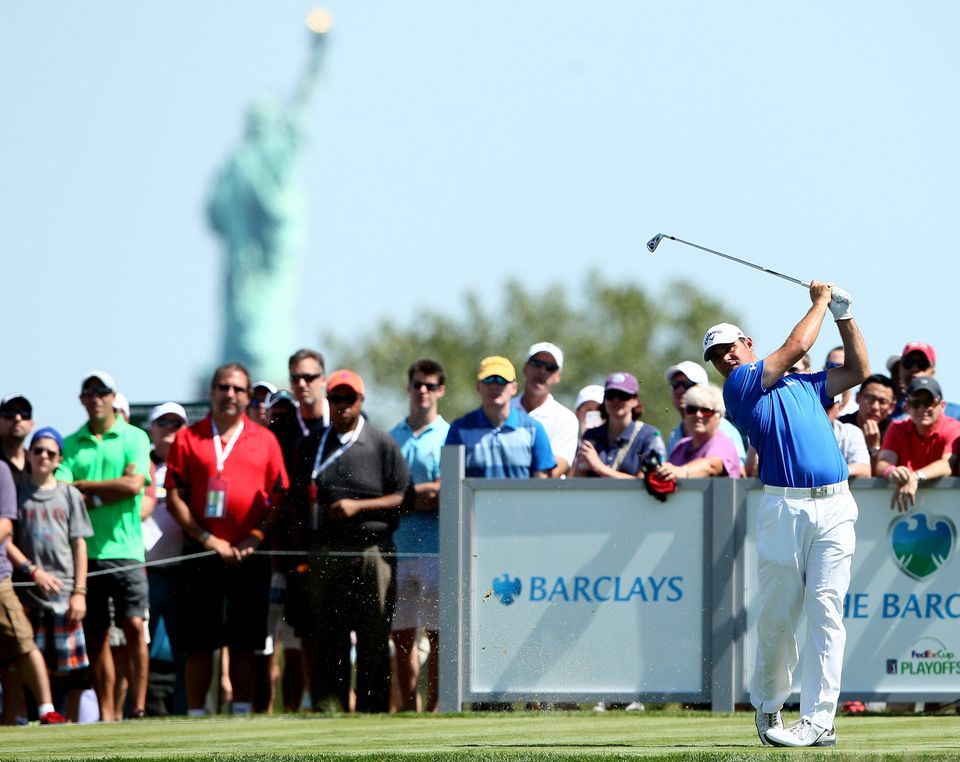 1 / 35
The Barclays - Final Round
JERSEY CITY, NJ - AUGUST 25: Gary Woodland of the United States watches his tee shot on the third hole during the final round of The Barclays at Liberty National Golf Club on August 25, 2013 in Jersey City, New Jersey. (Photo by Alex Trautwig/Getty Images)
Getty Images