Most residents of Tikrit fled in the months after the extremist group took over in June. Those who stayed have fled in recent days, but a tiny fraction are still there, awaiting their fate.

"Some people say they would rather die in their own homes," said 37-year-old Abu Saif, who sought refuge in Kirkuk after leaving Tikrit on Wednesday as security forces, Shi'ite militia known as the Hashid Shaabi and a small contingent of Sunni fighters advanced.

The forces have made gradual but steady progress, slowed by bombs and snipers as they approach from the north, south and east. They have yet to enter the city itself, but could soon launch attacks on the adjacent towns of al-Dour and al-Alam.

"The situation is frightening," Abu Saif said. "We are more afraid of the Hashid Shaabi, because they are seeking retribution."

Thousands of extra Islamic State militants have poured into the city from other parts of the group's self-proclaimed caliphate and are preparing to fight to the death, said Abu Saif, predicting the battle would be long and bloody.

Fleeing residents admitted many of them had initially welcomed the militants as saviors from the oppression they felt under the Shi'ite-led government that came to power after Tikrit-born strongman Saddam Hussein was overthrown in 2003.

They came to resent their presence after the extremist group began executing people it considered a threat, failed to provide public services, banned smoking and forced women to cover from head to toe.

But they feared they would receive the same treatment as Sunnis in neighboring Diyala province, where Shi'ite militia have been accused of massacring civilians and torching their homes as they drove the militants out - charges they deny.

"We are between the hammer and the anvil," said 32-year old Omar al-Tikriti, who managed to escape al-Alam several days ago with seven members of his family. "Either we'll be burned by the fire of the (IS) militants, or the fire of the militias."

Some militia fighters have vowed to avenge the deaths of 1,700 Shi'ite soldiers who were killed by Islamic State militants when they overran Tikrit in June with the support of several local tribes.

A spokesman for the Salahuddin tribal council said there was nothing to fear from the security forces or militia, and that Islamic State was spreading terror to rally Sunnis behind them. Marwan Jebbara pointed out that some 4,000 Sunnis were taking part in the campaign to retake Tikrit.

Shi'ite fighters advancing from the east have said they are accompanied by local Sunni people who are in contact with Tikrit residents to reassure them their safety will be guaranteed if they raise white flags when the fighters enter the city.

A Shi'ite cleric traveling with the advancing force reminded fighters they should respect civilians.

But residents expressed deep unease about the involvement of Iran, which backs some of the militias involved in the assault. Iranian Revolutionary Guard commander Qassem Soleimani has been spotted on the eastern front, where he appears to be directing operations.

None of the fleeing civilians Reuters spoke to expected to go back in the foreseeable future - if ever - unless the city was governed by local Sunni forces. "If the militias take control, not a single one of us will return," said Abu Saif.

Announcing the start of the offensive on Sunday, Iraq's Prime Minister Haider al-Abadi urged civilians to leave Tikrit, but residents said the militants had tried to keep them there.

"They want to use us as human shields," said 25-year old Tareq al-Jubbour, a student of political science at Tikrit University who fled al-Alam in secret several nights ago with his savings and passport.

"Innocent people will get killed and that will strengthen IS in Mosul and Raqqa," said Jubbour, anticipating how the militants would seek to exploit civilian deaths to draw more Sunnis to their cause.

Jubbour made it to the nearby government-held city of Samarra but now wants to abandon Iraq altogether. The UN said on Wednesday it was helping 24,000 people displaced to Samarra district alone by the fighting in Salahuddin.

Other civilians said they struggled to get out because the roads were blocked, and some had no option but to move elsewhere within Islamic State-controlled territory to the north and west of Tikrit, or the Hamrin mountain range to the east.

Twenty-nine-year-old Abu Khaled left Tikrit before dawn prayers last Saturday to avoid being stopped by Islamic State militants, who have few checkpoints on the roads at that time.

He traveled across six provinces in an approximately 1,000 km loop to reach Kurdish-held territory in the north. "We have been all over Iraq," he said, describing the circuitous route through Anbar, Kerbala, Baghdad, Diyala, back to Salahuddin, and finally Kirkuk.

Human Rights Watch on Wednesday said civilians in Tikrit were at "serious risk" from both Islamic State and government forces.

"All commanders in Tikrit need to make sure that their forces protect civilians and allow them to flee the combat zone," said Joe Stork, deputy Middle East and North Africa director. (Editing by Philippa Fletcher) 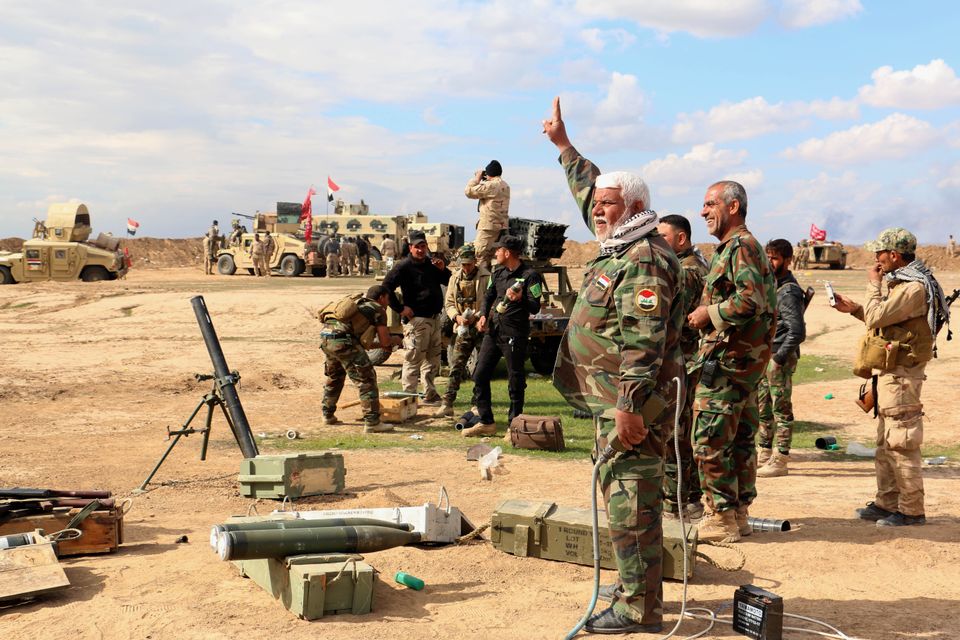