Fresh off the success of her freaky David Bowie video, "The Stars (Are Out Tonight)," Tilda Swinton has landed another fashionable gig: a new Chanel campaign.

Karl Lagerfeld has cast Swinton as the face of his Pre-Fall 2013 collection, photographing the actress for a new series of ads. The Pre-Fall collection, if you recall, was presented at Linlithgow Palace outside Edinburgh and was unabashedly Scottish, full of tartan, kilts and cozy layering.

So it's appropriate that Lagerfeld cast Scotland's chicest, Swinton, to rep the collection. Swinton was actually born in London and attended Cambridge University, but her family has deep Scottish roots. She currently resides in Nairn, in Scotland's Highland region, and certainly has an offbeat Anglo-Scot charm.

She's also a favorite of the style crowd: She attended the Chanel Resort 2013 show last May, starred in a fashion performance piece entitled "The Impossible Wardrobe" and has embraced lesser known designers like Haider Ackermann and Raf Simons (before he landed at Dior and exploded with fame). Plus, she's got that awesome makeup-free look that designers love.

Karl Lagerfeld included. Check out the first photo from the new campaign. 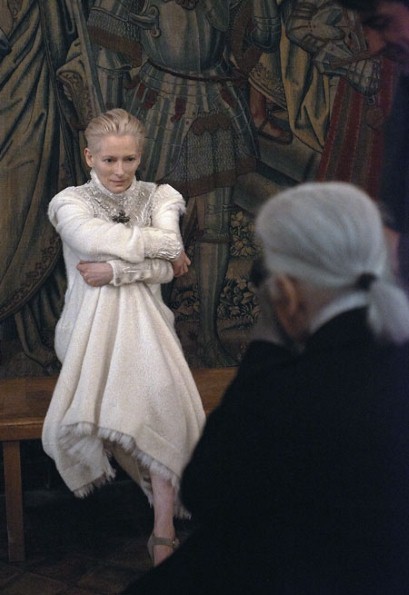