"Destiny guides our fortunes more favorably than we could have expected. Look there, Sancho Panza, my friend, and see those thirty or so wild giants, with whom I intend to do battle and kill each and all of them [...]."

"The ones you can see over there," answered his master, "with the huge arms, some of which are very nearly two leagues long."

"Now look, your grace," said Sancho, "what you see over there aren't giants, but windmills, and what seems to be arms are just their sails, that go around in the wind and turn the millstone."

"Obviously," replied Don Quixote, "you don't know much about adventures." 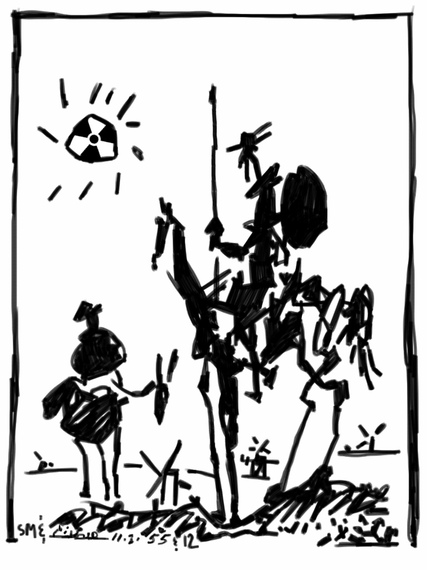 Six hundred and eleven years ago, Miguel de Cervantes wrote a story about a middle-aged man who dreams up a romantic, ideal world, and believes, against all reason, that it exists. He leaves his village in La Mancha on a quest to "revive chivalry, undo wrongs, and bring justice to the world, under the name Don Quixote." But the giants he battles are windmills, the damsel he covets is a peasant girl, and he dies disillusioned, in a real world where nothing has changed.

Cervantes was no stranger to that real world. He had been a soldier, and had fought bravely and been wounded in the Battle of Lepanto. Captured by the Turks and imprisoned for five years, he then served as a commissary for the Spanish Armada, where the corruption of others landed him in prison again. Still, this was a man who wrote:

"To change the world, my friend Sancho, is not madness nor utopia. It's justice."

Cervantes died on the 22nd of April, 1616, not knowing that he had written the world's first best seller. Don Quixote would later be translated into almost every language, be retold in plays, operas, ballets, and movies, and inspire such greats as Gustave Flaubert, Henry Fielding, Fyodor Dostoyevsky, Felix Mendelssohn, George Balanchine, Salvador Dalí, and Pablo Picasso.

Another man with a similar story would have turned eighty-seven this week. He believed, against all reason, that "all men are created equal." That they should be judged "not on the color of their skin, but on the content of their character." That they could "work together, pray together, struggle together, go to jail together, stand up for freedom together," live together.

"Quixotism" is the impractical pursuit of ideals. It is tilting at windmills, chasing the romantically absurd.

As this man did. He went on a mad quest to desegregate a nation of "separate but equal" bathrooms and classrooms, train cars and buses, theaters, juries, and legislatures. He launched an irrational call for racial equality in a black and white society; civic responsibility in the face of unjust laws; nonviolence, even at gunpoint, especially at gunpoint. He went to prison too, and still wrote:

"I have decided to stick with love...Hate is too great a burden to bear."

Martin Luther King, Jr. was shot on the 4th of April, 1968, in a country where racial discrimination and economic inequality were, and still are, quite real. But since then, his birthday has become a federal holiday, the first to commemorate the life and values of a non-white non-president. African Americans have closed the gap with whites in voter turnout and high school graduation rates. Black life expectancy and college graduation rates continue to rise, and there are eight times more African American members of Congress than there were in 1963.

"History is a war against time, its evolution representing the slow and steady collapse of physical and mental distances within imagination and life. The journey is so easy for us now that we forget the inventions that made such travel possible. [...] We forget that the individuals who developed these forms of relation did so at a great cost to themselves, reconfiguring meaning and communication in societies that were at best ambivalent to the new horizons opening up."

Like Henry David Thoreau, who in 1849 wrote that people should abide by their principles, and stand up to governments whose laws are immoral or unjust. Or Mary Wollstonecraft, who even earlier in 1792 said that in a social order founded on reason, men and women should be treated equally. Or Mahatma Gandhi, who argued that through Satyagraha, the nonviolent commitment to truth, India could achieve independence from Great Britain.

Or the three billion, three hundred and thirty seven million, four hundred thousand people throughout the world who, against all reason and with no weapon, fought for freedom and equality in the last century... and won.

The journey is far from over. Injustice remains, and "injustice anywhere is a threat to justice everywhere." Sometimes it does feel like we are just tilting at windmills. But we still read Don Quixote, the story of a man who chased his ideals across the Spanish countryside. We read it over and over again, hoping that this time around he actually finds them. Hoping he vanquishes those windmills. Hoping he does not give up. And we must never stop.

At the risk of seeming mad, at the risk of failing, we must never stop seeking, "in a world suddenly too small for existing cosmologies, a reality large enough to contain what we have seen"...

Because "one man scorned and covered with scars still strove with his last ounce of courage to reach the unreachable stars; and the world was better for this."