A volunteer firefighter turned himself in to authorities after allegedly killing the neighbors' dogs for coming onto his property and posting a photo of the remains on Facebook.

Tim Conatser, of Hunt County, Texas, posted the graphic photo on the social network last week which he claimed showed the slain dogs, along with the caption, "Somebody didn’t put any truth my warning. Keep your damn dogs on your property." 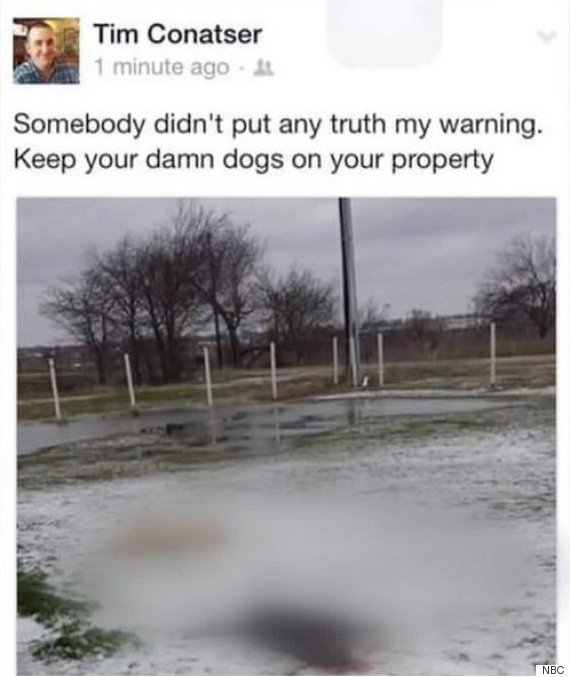 The 20-year-old was arrested Wednesday morning and is being held at the Hunt County Jail on two felony animal cruelty charges, Constable Terry Jones told The Washington Post. His bond is set at $10,000.

Conatser was stripped of his duties at the Union Valley Volunteer Fire Department after the photo started going viral last Wednesday. The fire department also released a statement on its Facebook page condemning Conatser's actions.

The animal cruelty charges are punishable by up to two years in prison, but Conatser could walk free; under Texas law, a dog or coyote that attacks livestock can be killed by a landowner in certain circumstances, according to the Herald Banner. Conatser had complained to another neighbor that the dogs were entering his property and attacking his livestock.

"So he went over to his neighbor’s and told him that his dogs was getting in his barn and attacking his animals, to please ya know keep ‘em at home, put ‘em on a leash, build a fence, do something," said neighbor Kevin Forester.

“He says he apologized and he’s guilty of posting this on Facebook,” Ragsdale said. “He’s young and he recognizes what he did was wrong.”