Former Treasury Secretary Timothy Geithner lashes out at just about everybody in Washington in notes he intended to keep private that were uncovered by ProPublica.

Geithner wrote the notes while working on his recent book, Stress Test: Reflections on Financial Crises, and they are neither a final, finished statement workshopped for rigor and consistency, nor intended for public release. They were produced in AIG's case claiming the government's 2008 bailout imposed harsher terms on the insurer than on banks. Geithner testified earlier this month. He declined to comment on the notes, according to ProPublica.

It's easy to see why Geithner would want the musings to remain private. If only the rubes understood me, Geithner seems to be writing. If only everyone weren't a rube. Geithner himself seems to acknowledge the petulant tone at one point, but presses on anway.

"That all sounds kind of whiney," he writes. "So let me continue in that tone."

Geithner is particularly hard on "populists," who he accuses of seeking "Old Testament" justice that he thinks would hinder economic growth. ("Old Testament" for Geithner means hardline punishments without regard for consequences. It's theologically problematic, but has also shown up in his book and his congressional testimony.) He ridicules populist efforts to seek a financial transactions tax, and is incredulous that the nation's largest federation of labor unions, the AFL-CIO, pushed for stronger derivatives regulation.

"I had deep distrust and scorn for the prevailing populist impulse," Geithner wrote. "The fact that the AFL was spending a huge amount of time and effort on financial reform seemed like a huge misallocation of resources. Tax reform, infrastructure, even executive comp maybe, but derivatives? There was no outcome on derivatives that was going to have any measurable effect on the fortunes of organized labor."

The upshot of Geithner's criticism, of course, is that what happens in the derivatives market has nothing to do with working people, which would seem to contradict the basic theme of his defense. Namely, that it was necessary to do nice things to nasty people in order to protect the broader public from further harm.

Populism is so toxic for Geithner that at one point, he takes aim at democratic institutions themselves, saying they are too vulnerable to populist demagoguery. It's an unusual take, since the notes feature page after page of Geithner triumphing over the unwashed masses and their pitchfork-wielding Democratic representatives on Capitol Hill.

"Governments in a democracy can be indifferent to the populist imperative if they already have all the authority they need, do not have to seek that authority from the legislature, and don't face a near term election," he writes.

But his most withering criticism is directed at congressional Republicans. "Unbelievable hypocracy [sic] on fiscal rectitude from Republicans, almost all of them," Geithner writes. He singles out Sen. Rob Portman (R-Ohio), a director of the Office of Management and Budget under President George W. Bush. "Portman, memorably even with his Bush OMB history. Nothing with Congress was on the up and up. Only the slimmest pretense of seriousness."

Geithner portrays himself as a victim of the daily grind of political tactics and gestures. He dismisses senators as shallow and partisan, citing personal conversation he had with Republicans who told him that no one would survive the scrutiny cabinet nominees get, or that they “can't vote for you unless you really need the vote.”

He is shocked to find that members of Congress write letters to the Treasury Department that are thinly disguised press releases. He claims, as the former head of the New York Federal Reserve, that he “really had no idea of the limits of executive and presidential power on economic issues. This was terrifying in the late summer of 2008 when we all relearned the fact that the only real emergency financial authority available to the President was to declare a bank holiday.” And it's terrifying to readers of his notes to learn that, as the financial crisis was unraveling, the government’s second-most important banking official had no clear understanding of the executive branch’s economic and financial authority.

As Geithner repeatedly laments how difficult it was for him to explain the Obama administration’s economic strategy to the public, he seems unwilling to do anything to change the situation. “The communications challenge was always going to be brutal,” he writes. Yet given the opportunity to engage in precisely the kind of political theater that makes things less brutal, Geithner seems above the venue, his opponents, and the necessary tactics. He cites congressional hearings among his “other problems. I was testifying all the time, meaning most times people were exposed to me was in the contentious ridiculous, acrimonious theatre of the hill [sic]. There was no way around this but it was bad.” He is searing in his assessment of lobbyists' relationship with politicians, calling the Chamber of Commerce an “extortion or protection racket,” yet conceding that between politicians and business leaders, it was hard to tell who was extorting whom.

Despite these criticisms, Geithner remains oddly passive in the notes. Such a strange commitment to inevitable defeat, untold truths, and condescending superiority are not positive attributes in a treasury secretary dealing with the worst economic collapse since the Great Depression.

On occasion, Geithner acknowledges that some populist critiques of the executive branch had merit -- those directed outside of the Treasury Department:

There was a new wave of blue state AGs in the financial centers of the country. They had the right incentives, but it took them a while to get going. Our mortgage fraud task force with DOJ was a good idea, but delivered little. The mortgage settlement was ridiculously protracted and ultimately unsatisfying in the penalties imposed and relief provided. The much trumpeted mortgage task force POTUS announced at 2012 SOTU was not about the average individual victims, but more the fights among the consenting adults that had sold and bought the mortgage securities that performed so badly. A huge part of the SECs attention was on insider trading, which though offensive and damaging, played no role in causing the crisis.

He says that after the worst of the financial crisis had passed, “mainstream journalists wouldn't write the contrarian, but now accurate view,” that the bailouts had been a success. He is particularly irked that the profitability of the AIG bailout was not sufficiently heralded. That’s hard to square with the reality that the AIG bailout's profitability was featured in many outlets, including a New York magazine cover story.

His gripes with the media can seem somewhat petty. He complains that in an interview, Erin Burnett, then at CNBC and now at CNN, treats the idea that government bailouts would make money as “implausible.” But in that interview, Burnett simply asks how much money the government will make. At no point does she say or intimate that it is implausible. In fact, she ends the segment asking viewers to watch her interview with Blackrock CEO Larry Fink “if you are wondering how an individual investor could buy these toxic assets… not just as a taxpayer, but as an investor yourself.” (At the time, Fink hoped to create mutual funds to hold toxic assets being auctioned by the government.)

Exasperated by repeated public assumptions that he once worked at Goldman Sachs (he never did), Geithner writes “ask Jake Siewert how long it took and how hard it was to get the NYTimes to issue a correction to a headline they put on a letter they published calling me a Goldman Sachs insider. This in 2011.” This is awkward: At the time, Siewert was an aide to Geithner at the Treasury Department. He is now global head of corporate communications for Goldman Sachs. Additionally, no such headline appears to have existed. The New York Times even wrote a lengthy story in 2010 debunking the idea that Geithner had worked at Goldman Sachs.

Yet he also says that a lack of fiscal stimulus “was far and away the most consequential factor in weaker growth, relative to what might have been possible.”

About housing, Geither is wistful: “Lots more if only's on housing.”

There are plenty more "if onlys" outside housing, too. 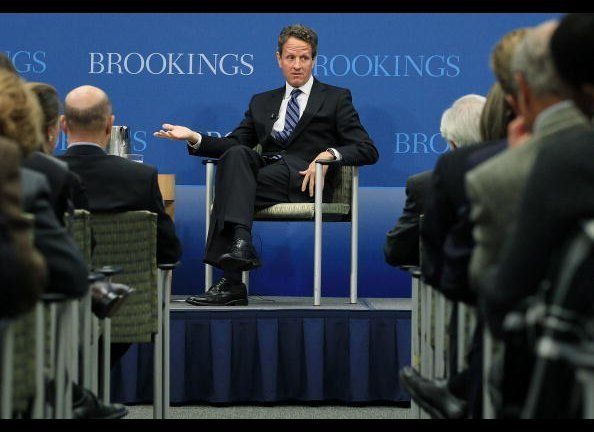