UPDATE, 4/21: The Associated Press reported Thursday that the bodies of Tim Hetherington and Chris Hondros, the journalists killed in Libya on Wednesday, were being taken on a ferry boat to Benghazi, the rebel stronghold in that country. There, American and British officials were due to take the bodies and evacuate them.

The AP also gave new information on the status of Guy Martin and Chris Brown, the two other reporters who were injured in the mortar attack that killed Hetherington and Hondros. Brown, who was not as seriously injured, was said to be up and walking in the Misrata hospital where the two were recovering. Martin, however, was still in the ICU.

Getty released images of the bodies being loaded onto the ferry in a refrigerated truck on Thursday: 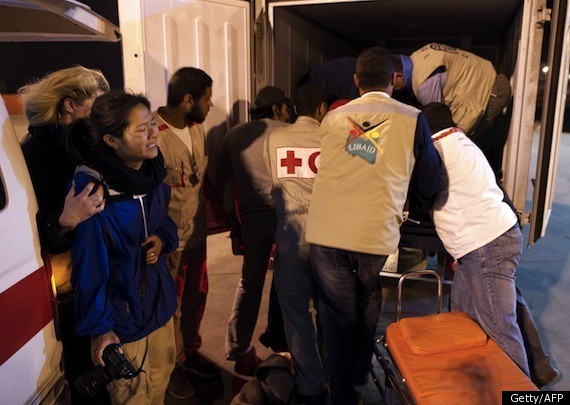 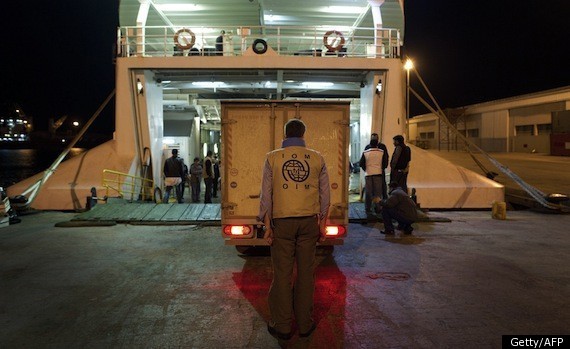 PREVIOUSLY:
Two highly acclaimed journalists have been killed in Libya.

Tim Hetherington, an Oscar-nominated filmmaker and photographer, and Chris Hondros, a Pulitzer Prize-nominated photographer, were killed in the city of Misrata after being hit by mortar fire during fighting between Muammar Gaddafi's forces and Libyan rebels. Two other photographers, Guy Martin and Chris Brown, were also injured.

Andre Liohn, a fellow photographer in Libya, was the first to report the news of Hetherington's death on his Facebook page.

Hetherington was a contributing photographer for Vanity Fair, and co-directed the Afghan War film "Restrepo" with author Sebastian Junger. That film was nominated for an Oscar for best documentary in 2011.

Hondros' work appeared in many major news outlets, including the front pages of many papers on the day he died. He was nominated for the Pulitzer Prize in 2004. In 2006, he won the Robert Capa Gold Medal, a coveted honor for international photojournalism.

There were initially conflicting accounts of his death. Liohn wrote on his wall soon after reporting Hetherington's death, "Chris Hondros died now." Liohn later told the New York Times that Hondros had slipped into a coma, having suffered a serious brain injury. It was actually not until later in the day that Hondros succumbed to his injuries.

A reporter for the News and Observer newspaper was at Hondros' family's house in North Carolina when a representative for Getty, the agency Hondros was working for in Libya, called to report his death.

Brown and Martin, the two other photographers, are recovering.

Leila Fadel, a Washington Post reporter, was also at the hospital and described what happened to the paper:

Hetherington appeared to be bleeding heavily from his leg and was very pale, she said. About 15 minutes after his arrival, doctors in the tent pronounced him dead...about 10 minutes later, another ambulance brought Hondros and other photographers to the hospital. Hondros had suffered a severe head injury. As doctors paused to examine a scan of Hondros’s brain, they told Fadel that shrapnel had hit the photographer in the forehead and passed through the back of his head. They asked her to hold his helmet.

Hetherington's family released a statement to Vanity Fair on Wednesday. It read, in part, "It is with great sadness we learned that our son and brother, photographer and filmmaker Tim Hetherington, was killed today...he will be forever missed."

Jay Carney, the White House Press Secretary, also issued a statement late Wednesday afternoon. The statement was released before news of Hondros' death had been confirmed:


We were saddened to learn of the death of film director and photographer Tim Hetherington while working in Misrata, and we are deeply concerned about the well being of other journalists who were wounded alongside him. Journalists across the globe risk their lives each day to keep us informed, demand accountability from world leaders, and give a voice to those who would not otherwise be heard. The Libyan government and all governments across the world must take steps to protect journalists doing this vital work. The United States will work to do everything possible to assist those who were injured in getting the care they need. Our thoughts are with these brave journalists and their loved ones.

Carney released a statement about Hondros' death on Wednesday night:

We were deeply saddened to hear that journalist Chris Hondros has died as the result of injuries sustained while covering the conflict in Misrata. Chris's tragic death underscores the need to protect journalists as they cover conflicts across the globe. Our thoughts are with Chris's family and loved ones.

The war in Libya has been intensely dangerous for journalists. Beyond the multiple kidnappings and abuses reporters have suffered, Hetherington and Hondros' deaths bring the number of journalists killed to at least four.