Last night, Mike Pence and Tim Kaine faced off in the vice presidential debate, tackling issues ranging from foreign policy to reproductive rights. While the two candidates have many contrasting views, one of the starkest is how each views LGBTQ equality. As the two candidates went head-to-head, LGBTQ rights remained the elephant in the room.

Yet, one of the loudest, clearest messages Trump sent to the LGBTQ community was selecting Mike Pence as his running mate. While Trump may try to wriggle out of his anti-LGBTQ positions, Pence has a long history of loudly and proudly opposing our equality and our dignity. Following the debate, it's important to take a look at where both candidates stand on the rights and dignity of LGBTQ Americans.

Notably, both Pence and Kaine cite their deep faith when talking about their approach to LGBTQ equality. Kaine says his faith has provided him a path to embracing LGBTQ equality. Pence uses a trumped-up faith argument to deny the dignity and equality of LGBTQ people.

Pence, an Evangelical Christian who was raised Catholic, calls LGBTQ equality a "radical social agenda" that would have "a chilling effect on religious expression, from the pulpits, in our temples, in our mosques and in our churches."

Conversely, during a speech at the Human Rights Campaign's recent National Dinner, Kaine said, "Who am I to challenge God for the beautiful diversity of the human family? I think we're supposed to celebrate it, not challenge it."

As someone who grew up in the Midwest, grateful for my parents' sacrifices for my Catholic education, I have to say Kaine is much more in step with the values my Catholic family raised me with - and with the majority of people of faith in this country. Among American Catholics, 58 percent support marriage equality -- one of the most significant margins of support among any religious group in the United States. What my parents taught me as the cornerstone of our faith "whatsover you do to the least of my brothers, that you do unto me..." is not recognizable in the words or actions of Trump and Pence.

As members of Congress, and as governors, both VP candidates have made decisions that directly affected the lives of their LGBTQ constituents. Here's a snapshot of the actions taken by each:

Pence's addition to Donald Trump's ticket has made it the most overtly anti-LGBTQ presidential ticket in history, while Hillary Clinton's choice of Kaine ensures that Clinton-Kaine is the most pro-equality presidential ticket ever. The two are light-years away from each other when it comes to issues of equality.

Pence uses his faith as a tool to deny equality. Kaine embraces equality precisely because of his faith. While many issues were debated by the two candidates last night, it has never been more clear who is standing on the right side of history when it comes to issues of fairness of LGBTQ equality. 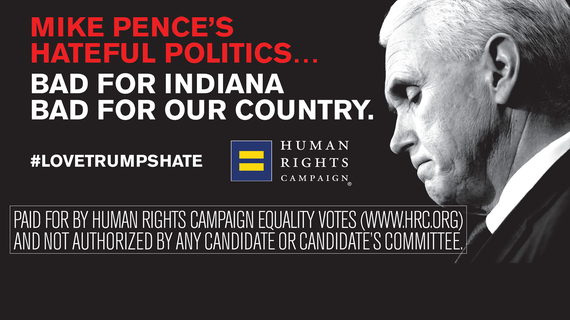